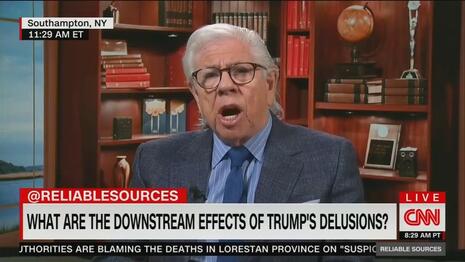 On last Sunday’s Reliable Sources, author Michael Wolff admonished host Brian Stelter for his show having “all the people saying the same old stuff….You're incredibly repetitive. It's week after week.”

This Sunday, it’s exactly the same, with Stelter bringing on “legendary investigative journalist” Carl Bernstein for what feels like the 37th time calling Trump a deranged madman. Oh, but today he’s a domestic “war criminal,” for “slaughtering” Americans with the coronavirus.

“I think we need to calmly step back and maybe look at Trump in a different context. He is America’s, our own American war criminal” – @CarlBernstein on CNN’s @ReliableSources. pic.twitter.com/YTfqJ7wsXr

BERNSTEIN: I think we need to slow down a bit and deconstruct some of the things that you've just laid out there. The first thing is I'm not a psychiatrist, and God knows all of us may have a degree of narcissism. But when you're talking about Trump, we're obviously talking about a kind of delusional madness, such as General Milley was talking about, that is on a scale and a scope that we have never experienced in an American president in our history. I think we need to calmly step back [!!] and maybe look at Trump in a different context. He is our own American war criminal of a kind we've never experienced before. What he has done, and what he continues to do --

BERNSTEIN: I did. In international law, there have been, quote, crimes against humanity. I think what we're talking about, Trump's crimes as an American war criminal in his own country that he has perpetrated upon our people, including the tens of thousands of people who died because of his homicidal negligence in the pandemic, putting his own electoral interest above the health of our people when they were slaughtered in this pandemic.

Looking at his actions in terms of fomenting a coup to hold onto office in which the chairman of the joint chiefs of staff has now compared Trump -- not the press, not reporters comparing Trump to Hitler, but rather the head of the American military comparing him and his movement to brown shirts, to the Reichstag fire. This is a huge wake-up call to this country when General Milley, the head of the American military, has said this. It fits as a piece with something so extraordinary in our history, it's not political. Trump is not just political, he transcends the political, and we need to start looking at his crimes in that context.

We could go on, but this is just the same unhinged Trump analysis, week after week, incredibly repetitive. And it remains bizarre that somehow Trump has killed tens of thousands, and CNN never suggests Andrew Cuomo "slaughtered" a single New Yorker by moving COVID-infected people into nursing homes. The double standard in this overwrought mess is ridiculous.