"Do you think conservative media, like Fox News, are doing the same? Are they killing people, too, with rhetoric like you just heard?" pic.twitter.com/m8vs4ziXTz

BASH: And to that point, you said that disinformation coming from so-called bad actors is also to blame for this. And I want our viewers to have an idea of disinformation being spread on the right. Take a listen.

LAURA INGRAHAM, FOX NEWS: There's nothing more anti-democratic, anti-freedom than pushing an experimental drug on Americans against their will.

TUCKER CARLSON, FOX NEWS: The idea that you would force people to take medicine they don't want or need, is there a precedent for that in our -- in our lifetime?

ROB SCHMITT, NEWSMAX: I feel like a vaccination, in a weird way, is just generally kind of going against nature.

BASH: I wonder if that person has ever flown in an airplane or a car or taken an Advil. But, besides that, President Biden did accuse social media platforms of killing people. Do you think conservative media, like Fox News, are doing the same? Are they killing people, too, with rhetoric like you just heard?

Notice that Ingraham and Carlson are featured mostly attacking mandatory vaccination, not vaccination. (Saying we don't "need" vaccination sounds more hardline.) On Tucker's July 6 show, he was making the point that the average age of those who died from COVID was 78, but the liberals panicked everyone.

During the segment quoted from July 12, Ingraham played a clip of liberal Sen. Dick Durbin saying "There are two host of programs on Fox primetime that can only be characterized as anti-vax quacks. I'm referring, of course, to Tucker Carlson and Laura Ingraham." CNN is the Voice of Durbin. Or she's copy-catting leftists at The New Republic. 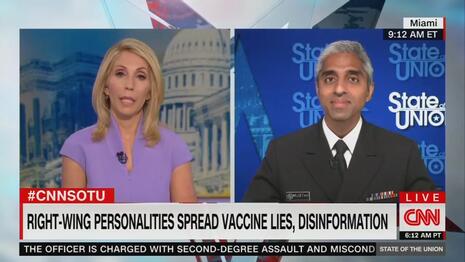 MURTHY: Well, Dana, I think all of us, including the media, including individuals, health professionals, have a responsibility to share the truth about health, as science dictates, as science informs us. And unless we do that, unless we are honest about the consequences of our communication with people, unless we are rigorous about ensuring that what we communicate is actually sourced from science, and not from an opinion, on critical issues like the vaccine, then we are going to ultimately put people at risk.

PS: Just before that, Bash pressed Murthy on what a Facebook official said to CNN in response to Biden's "killing people" rant: "In private exchanges, the surgeon general has praised our work, including our efforts to inform people about COVID- 19. They knew what they were doing. The White House is looking for scapegoats for missing their vaccine goals."

She said "that Facebook official is accusing you of saying one thing in public and another behind closed doors. Is that accurate?" He denied it. "Well, I have been very consistent in what I have said to the technology companies that I have spoken with, a number of them, over the last many months, and my team has as well."