“Critical race theory” has become the latest “Republicans pounce” story. Liberal media outlets are upset that this is being debated before school boards. On July 7, CNN reporter Elle Reeve complained “relentless propaganda from some conservatives created a panic that white people and especially white children are under attack.”

There is zero doubt that after all the overwrought journalistic elevation of George Floyd’s death into a “landmark” historical event that exposed “systemic racism,” the schools would follow. The so-called “hard conversations” – one-sided “anti-racism” diatribes about how America remains hopelessly, structurally racist – are happening in classrooms all across America. But it’s the parents who are “pouncing.”

In the celebratory hubbub over New York Times writer Nikole Hannah-Jones taking a journalism-professor job at Howard University, we were reminded that her “1619 Project '' at the Times was transformed into a curriculum for more than 4,500 schools. That project blamed racism for everything from the lack of socialized medicine to our addiction to sugar, the “white gold” that fueled slavery. 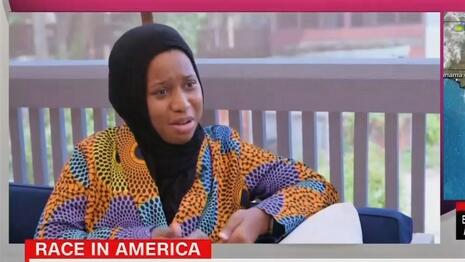 CNN’s Reeve responded to the unspooling conservative “panic” by insisting they wanted to meet “the actual people working with actual kids in actual schools.” Reeve’s “actual” expert was a black woman in a hijab in Philadelphia named Keziah Ridgeway. Reeve confused the audience by explaining Ridgeway “discusses CRT in her anthropology class.” Then Ridgeway claimed “Critical race theory is not being taught in schools.”

On CNN, Ridgeway zipped from saying CRT wasn’t taught to saying teaching it is a “good thing, because race and racism is literally the building blocks of this country. So how can you not talk about it?” She insisted “I’m teaching children to question America, and that’s what makes a good patriot.”

Radical leftists often claim they’re the “patriots” by disparaging America as a deeply racist place. What you can’t question is the “lived experiences” of minorities. Dissent will be dismissed as racist backlash.

People should actually read an article Ridgeway wrote for Education Week last year, titled “Before We Can Have Anti-Racist Classrooms, Teacher Preparation Needs an Overhaul.”

She boasted she’s an “abolitionist” teacher. “I teach African American history using a curriculum that has abolished the white supremacist, racist, and patriarchal lenses that are intrinsic within schools and are so harmful to all students.”

Abolitionist teaching, she explained, is “steeped in community organizing and informed by critical race theory—the understanding that race is a social construct used by white people for their own political and financial gain.” There’s the grand conspiracy theory.

It continues: “Abolitionist teachers call out racism and discrimination both within the school and larger society. They teach from a place of love that centers Black resistance and Black joy.” And that’s somehow “anti-racist.”

She insisted school leaders needed to “meet with Black, Indigenous, and other educators of color and listen to their experiences as both students and teachers. From that, faculty should create new courses and syllabi representing the best of abolitionist teacher preparation.”

The new courses are coming. The new targets are white Americans who are presumed guilty of exploiting racism for “their own political and financial gain.” And the new media misinformation is that none of this is happening at all, it’s just right-wing panic and propaganda.

The media and the public-school teachers are exactly alike in presenting themselves as the objective truth-tellers, the moderators of our national conversation, while they relentlessly agitate for “social justice” and seek to grind the opposition “lens” into dust.