For his “Reality Check” commentary on Monday’s New Day, CNN’s John Avlon broke out his Lexis-Nexis transcript searches in an attempt to shame Fox News Channel for its use of the term “Russia hoax,” as if CNN had somehow proven a nefarious collusion between the Trump campaign and the Russian government. If that were true, Robert Mueller would have proceeded to charge the president. But he did not. Avlon announced:

AVLON: Trump's defenders in  right wing media were all too happy to parrot his project and deflect talking points, scapegoating Ukraine despite overwhelming evidence that Russia interfered in our elections on his behalf as confirmed by the bipartisan Senate Intel Committee report.

TUCKER CARLSON: It was all lies, literally all of it. Even the court claims about hacking that formed the basis of the entire story and the investigation that followed.

There’s a lot of overstatement in there. With some time to kill, I dug into the Nexis search engine to attempt to confirm the CNN claims here. Let’s line up some asterisks about Avlon’s spin by just looking at those 78 uses in 2021. 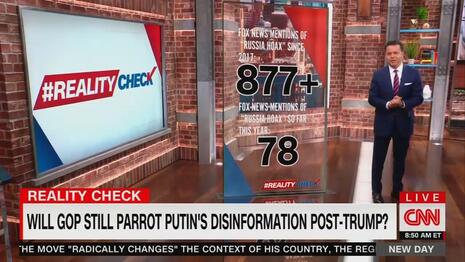 2. CNN counted it when Republican political figures said “Russia hoax.” At least 25 of the 78 “invocations” of the term came from guests, including members of Congress like Matt Gaetz, Jim Jordan, and Tom Cotton, as well as Donald Trump and Eric Trump.

3. This was most enthusiastically a Sean Hannity term. Twenty-three of the 49 segments with the term were on Hannity, and the closest rival was Sunday Morning Futures with Maria Bartiromo (with six). We counted 43 of the 78 “Russia hoax” utterances on Hannity's show.

Does CNN really think it doesn't offer partisan mantras in their coverage? In 2019, we found after Attorney General Barr released his brief summary of the Mueller Report, we found a total of 120 instances in which CNN hosts or other journalists asserted on CNN that President Trump had not been exonerated. When the full report was released, the word "impeachment" came up 363 times on the networks, with the vast majority (336) coming from cable networks CNN (198) and MSNBC (138).

CNN keeps insisting there’s nothing hoax-like on Russia, and forget the recent collapse of the Russian-bounties scandal. Indeed, Avlon repeated the canard that Paul Manafort sharing an internal poll with a Russian associate was somehow “collusion.”