On Sunday, The Washington Post broke out their list of the 50 most notable nonfiction books of 2020. As usual, the Post makes it a bit of a fringe benefit to list books written by their own staff, and this year, it's quite obvious most of them were judged "Notable" for trashing Donald Trump, who allegedly causes democracy to die in darkness. Mary Trump, the president's bitter niece, was also honored for her best-selling attack book.

“The Art of Her Deal: The Untold Story of Melania Trump,” by Mary Jordan

A portrait of a first lady who has been as willing as her husband to break the mold — and the rules — written by a reporter for The Washington Post.

“Ghosting the News: Local Journalism and the Crisis of American Democracy,” by Margaret Sullivan

The Washington Post media columnist exposes the repercussions of the erosion of local news, from polarized communities to a lack of government oversight. 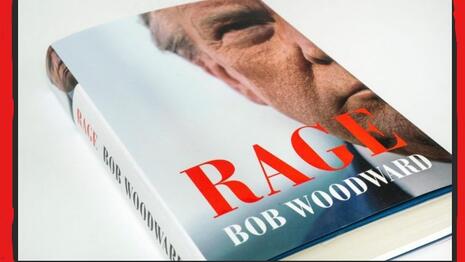 Woodward, an associate editor at The Washington Post, followed his best-selling “Fury” with this tell-all that incorporates 18 on-the-record interviews with President Trump that the president conducted against the advice of his staff.

Two Washington Post reporters take readers inside the president’s war with his own advisers.

“What Were We Thinking: A Brief Intellectual History of the Trump Era,” by Carlos Lozada

The Washington Post’s Pulitzer Prize-winning nonfiction book critic tries to make sense of Donald Trump’s rise to power with a self-administered syllabus of 150 books that claim to capture our current political moment.

And, for good measure, a nod to a former WashPost reporter and a former longtime WashPost columnist (uncredited):

The Pulitzer Prize winner, a former Washington Post reporter, grippingly recounts the rise of the surveillance state and his often thwarted attempts to investigate it.

“Twilight of Democracy: The Seductive Lure of Authoritarianism,” by Anne Applebaum

Other journalists honored by the Post included New York Times reporter Peter Baker and his wife Susan Glasser (formerly of the Post) for their book on James Baker; "historian" Jon Meacham, the former editor of Newsweek, for his adoring John Lewis book; and Molly Ball of Time for her positive biography of Nancy Pelosi. There's also a weird-sounding book by an NPR reporter who combines an exploration of fish taxonomy with "attempts to make sense of her own messy life."