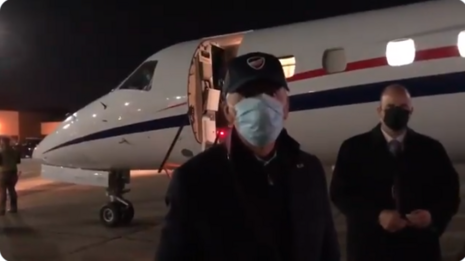 Joe Biden’s campaign announced another “lid” on Monday morning, announcing their candidate would avoid all contact with reporters for four entire days leading up to the Thursday night debate. Biden is avoiding reporters like each one of them is highly contagious with the coronavirus.

Over the weekend, CBS News producer Bo Erickson asked a very mild question on what is apparently supposed to be a forbidden topic, his family's financial wheeling and dealing: “Mr. Biden, what is your response to the New York Post story about your son, sir?”

Biden lashed out like the CBS guy was somehow from Fox News: “I know you'd ask it. I have no response. It's another smear campaign. It's right up your alley. They’re the questions you always ask.”

This is remarkably similar to last fall, when Fox’s Peter Doocy dared to ask about Hunter Biden's gigs: “Mr. Vice President, how many times have you ever spoken to your son about his overseas business dealings?” Biden claimed: “I have never spoken to my son about his overseas business dealings.” That was implausible then, and it’s ridiculous now. The New York Post report puts Joe Biden in a meet-and-greet with Hunter’s client at Burisma, the corrupt Ukrainian oil company.

When Doocy continued, Biden yelled at him: “Trump’s doing this because he knows I’ll beat him like a drum. And he’s using the abuse of power and every element of the presidency to try to do something to smear me.” Biden claimed “Everybody looked at this, and everybody’s looked at it and said there’s nothing there,” and then yelled at Doocy “Ask the right questions!”

Translation: “The right questions” means never unspool a question about anything having to do with the Biden clan’s lucrative and suspicious lobbying based on their government connections.

Almost no one objected to Biden disparaging the CBS producer. On Twitter, CBS reporter Paula Reid threw out the worst insult: comparing Biden to Trump. “Biden adopts Trump playbook - attacking pool reporter...for asking about Hunter Biden story which has been a focus of President Trump’s campaign over [the] past few days. Fine to attack the story, but why personally insult Bo?”

The liberals are already crying “false equivalence.” Well, yes, the obvious difference is that the press corps is overwhelmingly pro-Biden, so yelling at reporters is like yelling at your own supporters. He can’t be a budding authoritarian when he assaults reporters, because the oddball that throws a hardball isn’t representative of the media as a whole.

They might also scream “false equivalence” in comparing the financial jockeying of Biden’s children to the business of the Trump children. The Left has been screaming for five years about the Trump progeny and the “emoluments clause,”  but now it’s off limits for Biden.

This is a wider story. Take the candidate’s brother Frank. In January, ABCNews.com reported “How Frank Biden leveraged his famous name for business gain.” ABC’s TV coverage? Zero. Naturally, Biden falsely protested: ““I have never discussed with my son or my brother or anyone else anything having to do with their businesses, period.”

Then there’s his son-in-law Howard Krein. On October 13, Politico reported “Biden’s son-in-law advises campaign on pandemic while investing in Covid-19 startups.” That didn’t break through, either.

The campaign is almost over, and do you recall all the investigative journalism that’s been done on these family financial ties? Biden can lie and deny, and most reporters just let him vanish into the basement.