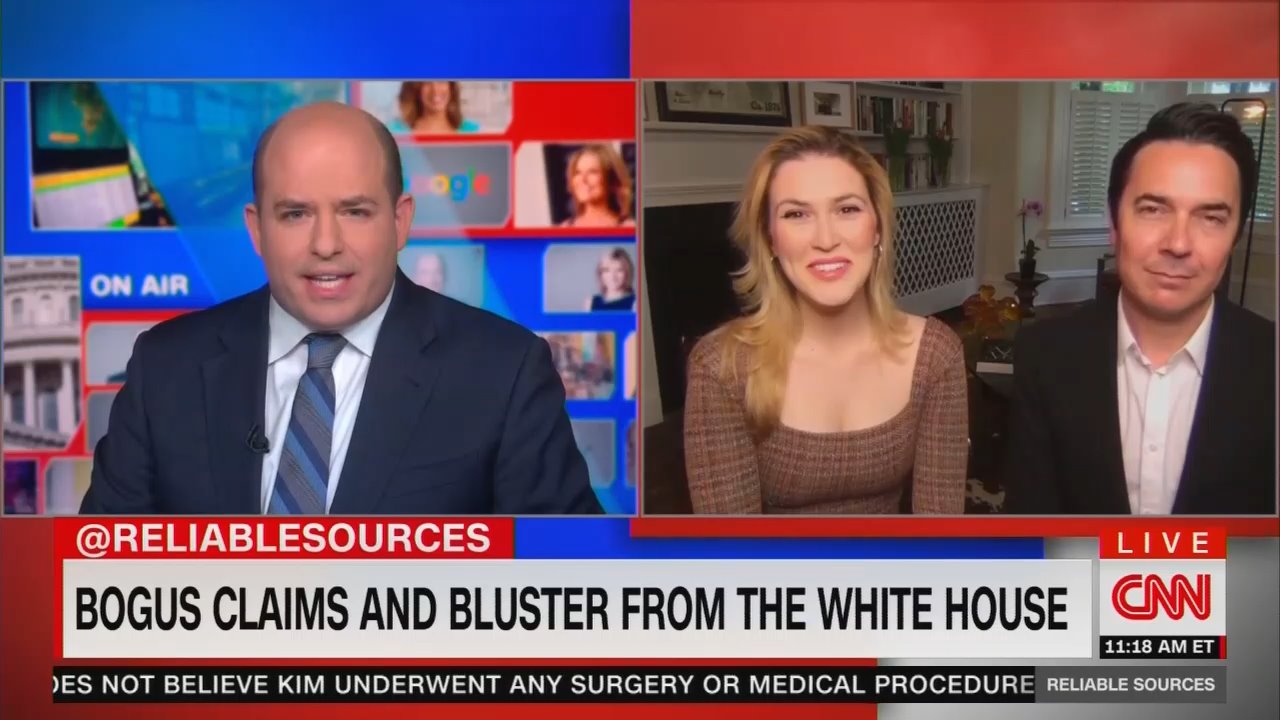 On Sunday’s Reliable Sources, CNN host Brian Stelter continued his consistently inconsistent record on Trump White House press briefings – bash them when they have them, and when they don’t. Stelter slammed the first briefing by new press secretary Kayleigh McEnany, playing up AP reporter Jill Colvin’s question asking McEnany to pledge she would never lie.

Stelter didn’t ask whether Democrat press secretaries were ever asked if they would lie from the podium, let along assess whether they did. Colvin didn’t respond to my tweet to her asking if that question’s been launched before by her company. Consistently inconsistent.

Instead, Stelter’s screen read BOGUS CLAIMS AND BLUSTER FROM THE WHITE HOUSE as he oozed “Maybe the New York Times put it best on Saturday – 'New press aide vowed never to lie, that was the first lie'.”

Stelter brought on New York magazine reporter Olivia Nuzzi and her boyfriend Ryan Lizza of Politico, sheltering in their D.C. home. He told Nuzzi “Olivia, you faced a lot of blowback for your question.” He replayed it. “If an American president loses more Americans over the course of six weeks than died in the entirety of the Vietnam war, does he deserve to be re-elected?”

Stelter then threw the softball “Why was that question important to ask?”

Nuzzi claimed “I think it’s important to put the question to Trump and to learn how he is thinking about these things. To his credit, obviously he often will attack the person asking the question....he did not do that in this case.”

Nobody was doing a “fact check” on this claim. How is it accurate to claim the president “lost” 67,000 Americans due to coronavirus? Would reporters think it was fair to ask how Governor Cuomo “lost” 18,000 New Yorkers? Cuomo never seems to get this harshly partisan attack line in his briefings.

Then Lizza rushed to his girlfriend's defense:

RYAN LIZZA: I'm always surprised by the social media reaction, especially on the right. Right now there is this view that we as reporters who go to the White House and go to these, especially Trump briefings, the only thing reporters are supposed to be doing there is getting more information, right, about the coronavirus response. And it leaves out this whole set of categories of questions about accountability and some of the -- one of the issues that Olivia raised.

And there's this sort of policing right now on the right that -- an argument that reporters only -- you're only there to, you know, find out a little bit more about what state is opening, some very technical specific informational question, and the broader more, ‘Hey, you said this, now you're saying this, why did you change your mind?’ or questions of accountability, that's all somehow showboating, or not real journalism. And that’s just wrong, and that’s never been the case since I’ve been covering the White House.

In my reporter days, I sat a few seats down the back row from Lizza at a White House press conference in the East Room a month after 9/11, so he's been there a long time. Somehow he's never found Jim Acosta and Brian Karem and so on to be "showboating"? That's just laughable.