CNN viewers are used to a narcissist spectacle on almost daily basis in White House reporter Jim Acosta. Former ABC White House reporter Sam Donaldson, whose liberal bluster is surely an Acosta inspiration, has come to Acosta's defense: "I think he's as good as it gets." So it was a little funny for Donaldson to come on CNN Wednesday night and slam President Trump and his top aide Kellyanne Conway as "narcissists" who love the spotlight and don't mind "trashing anyone."

Reporters are not good at self-reflection.

Anderson Cooper brought on "legendary reporter" Donaldson (which can be a synonym for "84 years young") to discuss a new book by a former Trump White House aide who trashed Conway as a "cartoon villain." If you don't remember Cooper or the liberals promoting former Secret Service agent Gary Byrne's anti-Clinton best-seller Crisis of Character, then you can understand how liberal bias works.

COOPER: A cartoon villain brought to life, that's how a former Trump aide describes Kellyanne Conway in a new look at the infighting the leaking and the gossiping that have been part of the fabric of the Trump White House. The former aide, his name is Cliff Sims, wrote about all of it in a book that comes out next week called Team of Vipers: My 500 Extraordinary Days in the Trump White House.

Vanity Fair has published an excerpt Sims writes about one particular day that he was writing a statement on Conway's laptop while she was texting on her phone. The two devices were connected and Sims write that for 20 minutes he could see the text conversations Conway was having with at least half a dozen reporters from all over the place she and the President call fake news. And that she was trashing Jared Kushner, Reince Priebus, Steve Bannon and Sean Spicer.

Honoring Sam Donaldson as a living statue of Ye Olde Liberal Media is a far better exercise than the Stelters and Maddows honoring disgraced Dan Rather. Cooper went right after Conway: 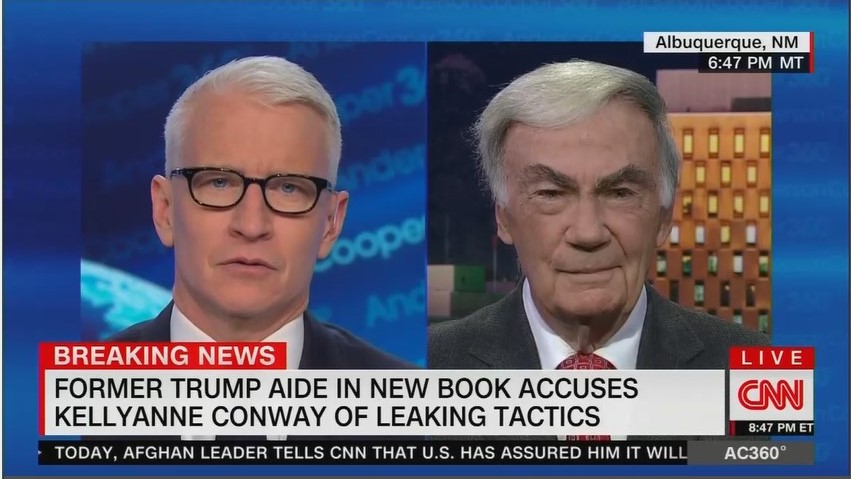 COOPER: Legendary reporter and anchor Sam Donaldson covered the White House, of course, for decades for ABC News, he joins me now. Sam, every White House has leakers as you know better than almost anyone. How often is such a prolific leaker in such a high level position?

SAM DONALDSON: Well, I've not seen anything like Kellyanne Conway. I mean, she and the President are symbiotic in their relationship. They look in a mirror, they see each other. They're both narcissists. They both want all the kind of media spotlight on them. They don't mind trashing anyone. She trashes Morning Joe, for instance, is another example. He trashes people and they both lie. I mean, what more do you want?

Cooper sounded a little dim as he asked "If President Trump hates leaks, as he claims, and Kellyanne Conway is a serial leaker, I guess then why is she still there?" Obviously, as Donaldson replied, every White House has leaks the president plans and wants, and the sneaky, unauthorized kind.