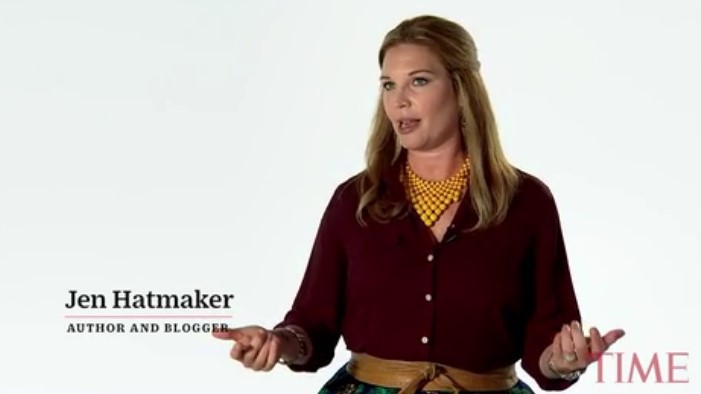 The liberal media’s favorite Christians are the liberal Christians, the ones who think there’s too much emphasis on abortion and homosexuality....and are fine with both, when you nudge them about it.  Time’s “Ten Questions” interview in the August 28 issue features "Texas pastor" Jen Hatmaker, a liberal author and blogger who’s horrified by Donald Trump and thinks evangelicals need to loosen up.

The pull quote in the magazine is this: “If we are following Christ literally, then nobody’s humanity is up for grabs. Nobody. That is a non-negotiable.”

This is NOT a quote about abortion. It’s a quote about “LGBTQ issues.” Liberals insist their positions are “non-negotiable,” and that social conservatives deny the humanity of people they oppose as the promoters of grave sin. Christians are called to surrender everything the Bible says about sexuality or they’re not “following Christ literally.” That may seem nonsensical, but it lines up with the Time viewpoint very nicely.

Time’s Belinda Luscombe asked an abortion question, if there’s a “way forward,” which translates into “will the anti-abortion folks please accept our progressive future?”

TIME: As a woman of faith, do you think there's a way forward in the anti-abortion vs. pro–abortion rights debate?

HATMAKER: It's one that my particular tribe of women is asking. Historically the Christian community has taken what is a very fraught decision and reduced it down to a sound bite. Right or wrong. But rather than simply just a pro-life stance, I'm seeing a much broader construct, which is pro–prenatal care, pro–affordable housing, pro–health care.

Pro-lifers get upset by Hatmaker’s politician answer, the one she has typically offered.  She refuses to address the humanity of the unborn, and then insults pro-lifers as anti-health care, or anti-affordable housing. Abortion is not a "decision," it's the destruction of a person. It's not "reduced to a sound bite" to advocate for a baby's survival. It's "reduced to a sound bite" if you obliterate their humanity.

Time’s interviewer was upset at “Why did so many evangelical Christians vote for President Trump, who didn’t seem to espouse traditional evangelical values?” This is a deeply stupid question.

How can supposedly intelligent journalists ignore the Supreme Court mandating "gay marriage" on all 50 states? And the fines and the shaming and the persecution of Christians who don't want to make gay-wedding cakes or host these unions? And the federal government imposing birth-control requirements on nuns? Religious liberty -- which the liberal media put in scare quotes, like they're not real freedoms -- are in danger, and Trump promised to oppose that.

One can certainly be a sincere Christian and skip voting for Trump. The better question is how can one profess to be a Bible-thumping evangelical Christian and be in vogue with the Democrats and Time magazine? What gospel is being preached?

TIME: Do you think LGBTQ issues will eventually divide the church?

HATMAKER: I feel hopeful, to be honest. Had you asked this question even 10 years ago, I would have had a different answer. Now I see really smart people pulling chairs up to the table and thinking this through together. If we are following Christ literally, then nobody's humanity is up for grabs. Nobody. That is a nonnegotiable. So I'm hopeful. And I hope to help lead that charge.

TIME: Were you surprised by the vitriol when you first expressed your opinion?

HATMAKER: Yes and no. I knew that space was tender. It's fragile, theologically. But if the end result was that I in some tiny, tiny, tiny way created a little safe space where really good people could join a conversation that matters, then I'm glad for it. It nicely parlays into what my dream is for my little moment on this earth, which is to set a really wide table.

This is a bogus answer. Liberals never set "a really wide table." They are not tolerant of the conservative Christians. They want them defeated and marginalized as...."fragile, theologically."