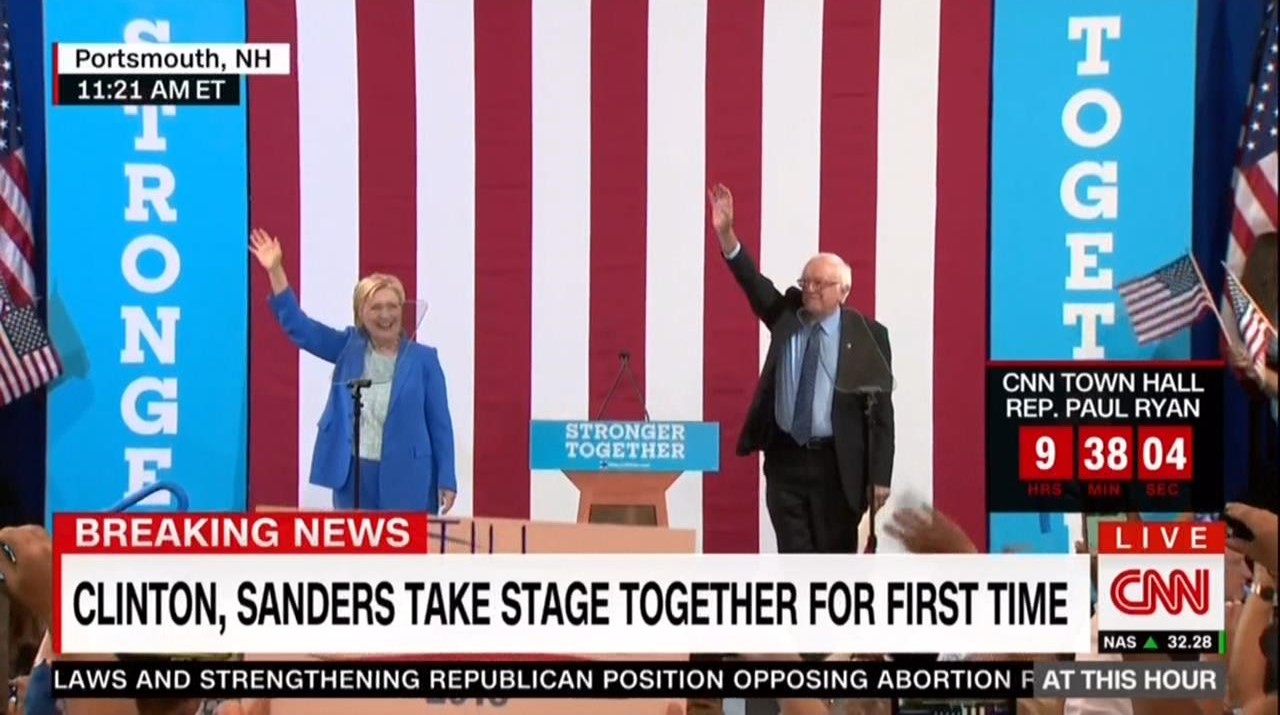 As he endorsed Hillary Clinton yesterday, Bernie Sanders comforted himself by asserting his campaign had brought the Clintons to creating “the most progressive platform in the history of the Democratic Party.” You wouldn’t find those words in The New York Times on Wednesday, but they did carry this story: “Emerging Republican Platform Goes Far to the Right.”

Reporters Amy Chozick, Patrick Healy, and Yamiche Alcindor only had this front-page nod to the Sanders boast:

In the coming weeks, from Mrs. Clinton’s choice of a running mate to her convention speech, campaign commercials and overtures to Republicans, the 13 million voters who backed Mr. Sanders in the primary contests will be watching her for any hint of wavering from their progressive causes.

Meanwhile, beneath that story (once it jumped to page A-13) was reporter Jeremy Peters warning about the far-right GOP platform. The headline in the paper was “Republicans Draft Platform That Reflects Trump, Then Heads to the Right.” Peters began:

CLEVELAND -- Republicans moved on Tuesday toward adopting a staunchly conservative platform that takes a strict, traditionalist view of the family and child rearing, bars military women from combat, describes coal as a ''clean'' energy source and declares pornography a ''public health crisis.''

It is a platform that at times seems to channel the party's presumptive presidential nominee, Donald J. Trump -- calling to ''destroy ISIS,'' belittling President Obama as weak and accusing his administration of inviting attacks from adversaries.

But the document positions itself far to the right of Mr. Trump's beliefs in other places -- and amounts to a rightward lurch even from the party's hard-line platform in 2012 -- especially as it addresses gay men, lesbians and transgender people.

The Times then has to acknowledge the game they are playing here. The platform isn’t “far to the right” of previous platforms. It’s staying the same as the Democrats have pushed the LGBT crusades far to the left. The “mainstream” has lurched toward "inclusion," but the Democrats were never “far left” in the entire crusade. By this measure, Barack Obama and Hillary Clinton were on the "far right" in 2008. “Society” has shifted (at least Peters didn’t say “evolved”) to the libertine left:

The numerous additions to the platform on marriage, family, homosexuality and gender issues were a reflection of just how much society and the law have shifted since Republicans adopted their last platform four years ago. And the debate this week showed just how unsettled many Republicans remain with those changes.

But nearly every provision that expressed disapproval of homosexuality, same-sex marriage or transgender rights passed. The platform calls for overturning the Supreme Court marriage decision with a constitutional amendment and makes references to appointing judges ''who respect traditional family values.''

''Has a dead horse been beaten enough yet?'' asked Annie Dickerson, a committee member from New York, who chastised her colleagues for writing language offensive to gays into the platform ''again and again and again.''

The Times failed to describe just how far to the left Ms. Dickerson is. The Hill newspaper was much more specific: "an adviser to billionaire GOP donor Paul Singer, who is a proponent of same-sex marriage and other issues championed by the lesbian, gay, bisexual and transgender community." In other words, a woman who matches the Times template.

It would be accurate to say the socially conservative Republicans are standing firm, even at the risk of unpopularity. But Peters suggests "while public and legal opinion has moved steadily in one direction, the official declaration of Republican Party principles appears to be heading sharply in the opposite direction." But they're not "heading" in a direction. They're standing in the same place, and not budging.

The pull quote in the newspaper summarized: "A conservative backlash against recent expansions of L.G.B.T. rights." Naturally, the LGBT agenda is never "left" or "far-left."

Peters also added this little tweak about Trump’s personal morality: “If Mr. Trump, who has children with three different wives, does not share all of the party's most socially conservative stances, he could certainly be heartened by other additions to the platform, especially on national security and defense.”

No one at the Times will write anything like “Mrs. Clinton, who has tolerated many affairs” in their coverage of the Democratic planks on marriage or other social issues.

Peters concluded that "what Republicans will probably end up with when they formally vote next week to ratify the platform approved in committee on Tuesday is a text that can seem almost Victorian in its moralizing and deeply critical of how the modern American family has evolved."

There's the use of "evolved," away from the fuddy-duddy "Victorian" lingo and toward the....libertine, or the Clintonesque.

PS: In a Monday story, Chozick did touch briefly on the platform:

At the Democratic National Committee platform meeting in Orlando over the weekend, Mr. Sanders and the liberal wing of the Democratic Party promoted issues that had fueled his campaign.

Last week, Mrs. Clinton announced a plan to eliminate in-state tuition at public colleges and universities for families with annual incomes up to $125,000, a step toward the plan Mr. Sanders had pushed.

On Saturday, Mrs. Clinton also inched closer to Mr. Sanders on the issue of health care, encouraging Congress to add a ''public option'' to the Affordable Care Act and calling for additional support for community health clinics.

Backing “free tuition” and a “public option” could certainly be defined as going “far-left” in the Democratic platform, but you won’t find those words in the Times -- unless, of course, it’s a caption explaining which personage is on the far-left of the picture.