Time Feels Hillary's Pain at Being Called 'Liar'; But Cruz Is a Con Man in River City 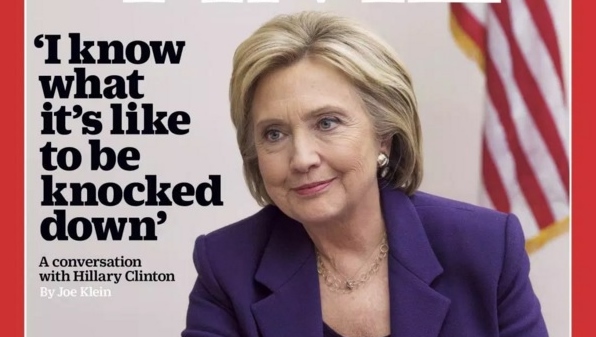 Someone just paging through the magazine at say, a dentist’s office – if any one of those still subscribes to Time – would catch the Hillary article with the silly headline “Do You See Her Now? After more than four decades in the spotlight, Hillary Clinton is finally coming into view.”

The pull quote from Time writer Joe Klein on the next page is “Clinton has become so encrusted with notoriety at this point that it’s near impossible for her to get a clean shot to make her argument.” Get out a handkerchief.

Meanwhile, there’s also a story on the Republican race in that February 15 edition, and the contrast is obvious. The headline is “Anger Management: After a wild preseason, GOP voters take sides.”

The pull quote from Time writer David Von Drehle isn’t a pulled punch: “The fact that a novice candidate with a half-baked platform and hair-trigger mouth could draw more than 45,000 votes was a political sensation.”

Unlike the TV networks, at least Time spends a little time noting Ted Cruz won the Iowa caucuses, and then goes on the attack. Cruz was a con man, like The Music Man: “He pitched his cause in a seamless patter worthy of Professor Harold Hill in River City, asking unabashedly for every voter to bring along not one but nine more."

Cruz might win in New Hampshire, since “Patrick Buchanan, with half the political skills of Cruz, thrived there in the 1990s on a platform of red meat and rifles.” And then he could do well in the “SEC primary” in the South.

“What makes this scenario plausible is Cruz’s ideological purity – to get to his right, you’d have to seize a wildlife refuge – backed up by his broad base of donors, who rage from megacheck millionaires to small-money crowdfunders.”

In his article, Klein explored how Hillary just wasn’t clicking with voters:

It seemed that Clinton had passed the point in the arc of her celebrity where she could be judged on her own merits – as an independent entity, not someone’s wife; unencumbered by the quarter-century of garbage that has been thrown at her; unencumbered by the missteps she has made, which have been inflated beyond reason because every step she takes is on a very public high wire. She has become so encrusted with notoriety at this point that it’s near impossible for her to get a clean shot to make her argument.

As for her enemies, who are legion and rabid, everything she says or does is easily dismissed. Hillary Clinton is a Republican epithet. [Italics his.] She’s a liar, she’s untrustworthy, she lives two steps ahead of the law – the drumbeat is so relentless it transcends the conservative fog machine and has infected the Democratic electorate, according to exit polls. She is considered “untrustworthy” by Sanders voters, even young women.

He can’t imagine there’s a reason for people to call her a liar or untrustworthy or indictable. The emails? Oh, that’s just “part of the perpetual haze around her — the sense, fair or not, that she cuts corners.”

That’s like writing “the sense, fair or not, that Bill Clinton has had a few affairs.”

After all this sympathy, Klein does try to throw readers off the impression he’s a journalistic servant, especially that “She has been an opaque figure; she isn’t ‘authentic’ in any demonstrable way, except for her relentless hard work, which is difficult to demonstrate in the midst of a campaign.”

Hillary’s reputation for dishonesty is hard-earned. Being “encrusted with notoriety” comes from being opaque, from shredding law firm documents and only providing half the State Department e-mails and telling Matt Lauer those Lewinsky stories wouldn’t be “proven true.” It’s not some tragedy. It merely comes from people paying attention and having a memory.

When you click to read the cover story online, non-subscribers can read a few silly questions and ridiculous answers from Klein to Clinton, like this one:

KLEIN: On the Friday before the caucus, the story comes out about the 22 emails. How are you going to get past this?

CLINTON: The same way I did Benghazi, by actually stating the facts over and over and over again, despite the Republicans' best efforts to try to confuse the electorate, to try to create an issue where there was none and then testify for 11 hours and there will be some who will continue to raise it, but it has certainly gotten absorbed through the body politic. This will as well.