The Left is incessantly freaking about all sorts of things - about which very little freaking is actually necessary. 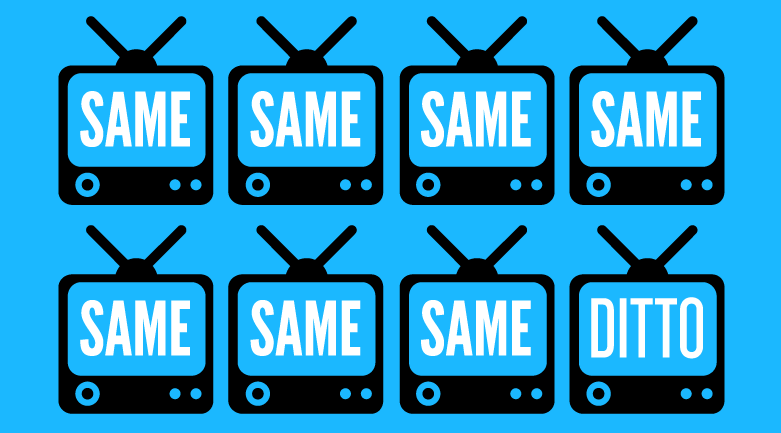 The Media is - by-and-large - the Left’s megaphone. About whatever the Left is freaking - you’ll find the Media freaking. Only louder, with many, MANY more outlets with which to amplify the freaking.

The advent of the Internet - has exponentially increased the number of outlets through which the Media can freak. For instance: If you miss a particular MSNBC on-air freakout - fear not, on the Web it shall hang forever, just a couple of mouse clicks away.

And nigh every outlet generates all sorts of Web-only content - video, audio and written. For even more additional avenues for freaking.

Each and every media outlet - is a multi-platform content delivery corporation.

The massive expansion afforded us all by the Internet - has allowed each and every outlet to be a one-stop-consolidation shop. They can each do TV, radio and print - all by their onesies.

The FCC is allegedly an “independent” agency - though it actually exists within the expanses of the Executive Branch. And it is charged with regulating our communications.

But the FCC’s reasons for continuing to exist - have pretty much evaporated as the Internet expanded.

The world over which it lorded - was finite and flat. The World Wide Web - is round and limitless. The world is download digital - the FCC is an 8-track player.

So when the dinosaur FCC weighs in on one of its issues - it almost always looks REALLY out of time and place. Even when the Commission is doing the right thing - getting the heck out the private sector’s way. To wit:

What is this - 1941? Are we really fearful of a return to Citizen Kane-esque outlet dominance?

On the Internet there are - estimating conservatively - nine trillion media outlets. From all over the planet. But for the Left-Media, “consolidation” is a HUGE problem.

Never mind the fact that the Internet has rendered the old-school, local-up media model - a bunch of 45 records in our Spotify world.

Which means these local media outlets - that used to make gobs of money - are now hemorrhaging cash. So our two options now are consolidation - or out-of-business oblivion.

And how warped is the Left-Media worldview?

Somehow, someone owning a local newspaper and a local TV station in the same town - is AWFUL.

But international Media mega-conglomerates delivering that same town video content over-the-air and on cable - and additionally delivering all sorts of video, audio and written content on their million-dollar websites - is just fine.

Media Consolidation Is a Threat to Democracy

Again, the only media consolidation about which we should be concerned - was a nigh-monopoly that formed ages ago. And grew into a trillions-of-dollars-a-year monster.

Just about every (news) outlet that produces content anywhere - is Leftist. Ideological consolidation of the worst kind.

To provide just one additional example (we could fill the limitless Web with them), behold the Left-Media’s reaction to another wise Trump FCC move.

This exponentially increased the power - and the scope of regulatory overreach - of the FCC on the Net. No bueno.

Thankfully, the Trump FCC is undoing this too. And the Left-Media is FREAKING. As one. Dozens of headlines and stories - all saying nigh exactly the same thing.

They all lie about what is actually going to happen - in exactly the same way.

FCC Plans to Vote to Overturn U.S. Net Neutrality Rules in December: “The head of the Federal Communications Commission is set to unveil plans next week for a final vote to reverse a landmark 2015 net neutrality order barring the blocking or slowing of web content….”

Well Reuters makes Net Neutrality sound innocuous. Why would anyone object? Why would the Trump FCC undo it?

Reuters NEVER mentions “Title II” or “reclassification.” They never mention the massive expansion of government in which that huge move resulted.

What other Left-Media outlets never mention that massive government grab in their stories? Here’s but a partial list:

The FCC Could Kill US Net Neutrality as Soon as December

Net Neutrality Rules May Be Thrown Out in December

That is a LOT of media outlets. No dearth of choices there.

Source consolidation - not at all a problem.

But EVERY ONE of those stories - skips entirely the huge government grab.

So the government has yet again demonstrated that it is woefully inept when it tries to lord over the private sector.

And the Left-Media has yet again demonstrated that it is woefully inept when it tries to report on the private sector.

Via its nine trillion outlets - all marching in ideologically consolidated fashion.