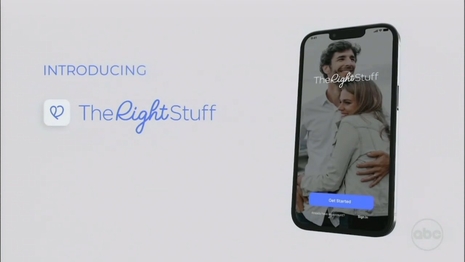 The haters at ABC late night on Thursday showcased, yet again, that they despise half the country. Jimmy Kimmel Live guest host David Alan Grier seethed about a new conservative dating app, deriding The Right Stuff as “Tinder for bigots.” Grier didn’t really bother to offer a joke there, just that all conservatives are racists.

CBS Mornings on Friday also covered the new app with Democratic donor Gayle King agreeing that she would want her kids dating within their political party. But first, here’s Grier on Thursday night: “There's a new dating app. It is called The Right Stuff....It's basically Tinder for bigots.”

The hateful Grier then played a doctored ad for the dating app with faux graphics proclaiming, “No gays,” “no Mexicans,” “only a few Blacks.” How hateful are the people behind Jimmy Kimmel Live? In 2017, when asked about Republicans turning off his show, Kimmel replied, “Not good riddance, but riddance.”

Over on CBS Mornings, co-host Tony Dokoupil asked about the new conservative dating app, wondering, “So I put the question to my trusty co-hosts, you have kids, would you want —  without revealing political beliefs of your children -- Would you want them to marry within their political belief system?”

Now, we don’t know about the politics of King’s daughter and son. But as I wrote in a 2020 NewsBusters analysis on her, we do know King’s politics:

If donating only to Democrats wasn’t enough, in 2017, King has vacationed with them as well. The CBS co-host enjoyed a trip on a yacht with the Obamas, angering actual journalists within CBS.

The hate on Jimmy Kimmel Live was sponsored by Liberty Mutual. Click on the link to let them know what you think. 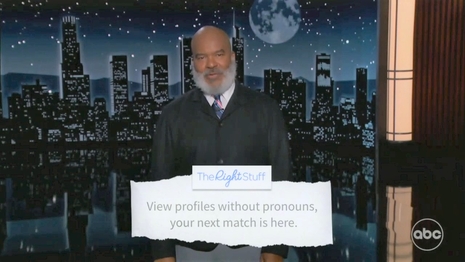 DAVID ALAN GRIER: Now you guys don't need this, but for some in our audience who are single and still out in them streets, they're looking for someone very special to meet. There's a new dating app. It is called The Right Stuff. Now, this is for the conservative dater. You see what they did there? The “right” stuff. It's basically Tinder for bigots. And one of their selling points is that you can view profiles without pronouns. In case you're wondering, the pronouns for anyone you meet on this app are “they” and "suck.” The Right Stuff doesn't launch till next month. But they've already put out a very informative commercial.

Graphic: “No gays” “No Mexicans,” “Only a Few Blacks.” Hey, guys. I'm Ryan. I am so excited to announce a dating app for all of us conservatives. It's called “The Right Stuff." What I love most about it is it's invite only. Not just anyone can join. The right stuff is all about getting into the right dating pool. We're sorry that you had to endure years of bad dates and wasted time with people that don't see the world our way. The right way. Okay, once you're in the app, you're ready to post a date. You can create your ideal date. You choose the time and place. See you there.

VOICE: The right stuff is not liable to match you with a cousin or stepbrother. Check the Age of consent in your state before kissing. Sex before marriage may result in eternal damnation. Please use the meth responsibly.

GRIER: We may have doctored it just a little bit.

TONY DOKOUPIL: My “Talk of the table” is not pop culture related, but it is culture related. It's about a new dating site, dating platform, dating app. It comes out of Trump world, two former Trump adviser and a political appointee with backing from a Trump donor, Peter Thiel, for conservatives. Take a look at the promo.

DOKOUPIL: So this caught my eye because as a business --

GAYLE KING: Are you trying to date?

DOKOUPIL: Gotta get back out there, Gayle.

DOKOUPIL: It caught my eye because it seems like a smart business move if you look at the polling. Since the 1950s there's been a doubling in the proportion of Americans who want their kids to marry someone of the same political party. So now most Americans apparently want their kids to marry in the political party. So I put the question to my trusty co-hosts, you have kids, would you want —  without revealing political beliefs of your children -- Would you want them to marry within their political belief system?

NATE BURLESON: Yeah. I do believe that, as well. My mother said try to date someone that's evenly yoked. You would love my kids to date someone that has different beliefs so they can challenge their own within the relationship and decide on who they are.

BURLESON: Listen, that's not bad. Listen, people have dating sites that are based on race.

KING: [Responding to the politics comment.] Yeah. I don't think that's bad at all. There's a farmersonly.com.

BURLESON: Like it’s a stamp or a title. That’s where we are.