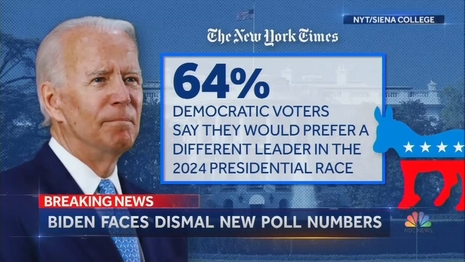 I wrote at the time:

Biden’s fall is, by far, the bigger news story of the two. In January of 2017, Trump started as an unpopular President, averaging around 44 percent, according to Real Clear Politics. His numbers largely stayed that way for four years. In January of 2021, Biden began as a popular President, beginning with a 55 percent popularity rating. By near the end of October, his average fell to just 42 percent.

And since then, it’s gotten even worse. On Friday, Biden’s Real Clear Politics average of approval polls was 37.2. On July 22, 2018, four years ago, Trump’s approval was 43.1. That means Biden is almost six percent LESS popular than the unpopular Trump.

Back during the Trump years, the networks were gleeful at Trump’s bad polling. On the August 2, 2017 CBS Evening News, Chip Reid trumpeted, “According to a new poll from Quinnipiac University, 62 percent of Americans say the President is not honest. Seventy-one percent say he is not levelheaded.”

The question for Biden is just how low can he go? According to the New York Times, Biden is polling at 33 percent. One thing is for sure, the networks won’t be excited about Biden’s collapse as they were about Trump unpopularity.