The British Daily Mail on Wednesday summed up the newest laptop revelations with this staggering headline:

Additional details from the story:

Of the 281 websites found in his search history over six days, 98 were pornographic, DailyMail.com can reveal.

However, other texts show he and Joe Biden used each other's phone numbers at various times, so it is unclear whether the president was using that number at the time.

Network morning and evening news coverage for this? 0 minutes and 0 seconds.

People magazine on Wednesday published an excerpt of the new memoir by Kathleen Buhle, Hunter’s ex-wife. Buhle wrote about how it was left to her daughter to reveal that Hunter was having an affair with the widow of his dead brother.

"Debbie," Finny said once we had Naomi on speakerphone, "can you tell her? We can't do it." Debbie looked me in the eye and calmly said, "Kathleen, Hunter's having an affair with Hallie."

"Oh my God." This was all I said. Was this what shock felt like? "How do you know?" I finally asked.

"We found his phone," Finnegan said. "There were text messages between them," Naomi added.

I could see Finnegan's face relaxing now that the secret was out and I hadn't fallen apart. If anything, I felt a strange vindication. Not only had I not been crazy, but it was so much worse than I could have imagined. I was shocked, but not heartbroken. Heartbreak had already flattened my self-esteem that past year. "We called Hunter," Debbie said to me then with a look of compassion. "We told him we found the phone and that we knew." She looked directly at me. "From now on, Kathleen, no more secrets. I told the girls that from this day forward, you will tell them the whole truth."

No more secrets. The idea was a relief.

Network morning and evening news coverage for this? 0 minutes and 0 seconds.

None of this should be shocking. As I reported on March 28, the network morning and evening newscasts went 259 days without saying the words “Hunter Biden.” And as Media Research Center Director of Media Analysis Geoffrey Dickens tweeted on Thursday, there’s only been 275 seconds on the Hunter Biden Laptop since the March 16 revelation by the belated New York Times that it’s real. 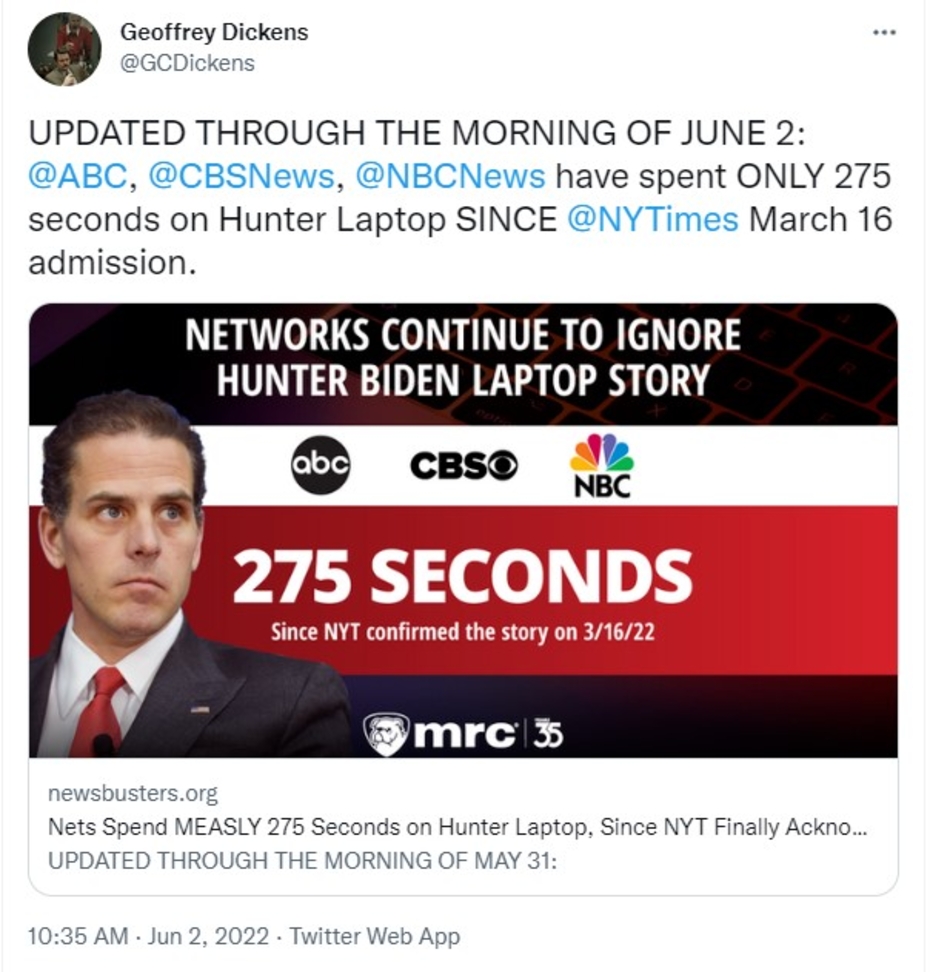 On April 5, 2021, CBS Mornings allowed just 40 seconds in a larger interview to Hunter's affair with the wife of his deceased brother Beau Biden.

On that day, reporter Anthony Mason offered mostly gently questioning about the affair:

ANTHONY MASON: A lot of people look at that and think, what were you thinking?

ANTHONY MASON: What were you thinking?

HUNTER BIDEN: Both of us had gone through the most incredibly painful loss.

HUNTER BIDEN: And it was out of love. And I thought that maybe that love would bring my brother back.

Given the obsessive way the networks covered Donald Trump's sons, how do you think they would handle all the disturbing and disgusting revelations in the Hunter Biden laptop, if they were about Don Jr. or Eric Trump? “Pretty differently” would be the understatement of the year.