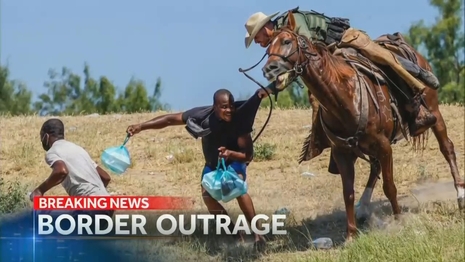 All three broadcast networks in the fall of 2021 smeared border patrol agents as monsters who “whipped” illegal immigrants in “horrific,” “alarming” video. The footage showed a small number of agents on horseback struggling to stop migrants from crossing the Rio Grande.

They uncritically parroted Joe Biden on September 24, 2021 vowing to punish the accused: “I promise you, those people will pay.”

However, as the New York Post reported on March 29: “The Border Patrol agents accused of ‘whipping’ Haitian migrants last September have been cleared of criminal wrongdoing.” But the same networks that devoted 13 minutes and 25 seconds of coverage to the supposed outrage last fall have censored any mention of the clearing.

Back in the fall of 2021, ABC hammered the story for five days straight (From September 20th through the 24th) on Good Morning America and World News Tonight, smearing the agents for seven minutes and nine seconds. CBS Mornings and the CBS Evening News came in second with three minutes and 12 seconds and NBC pushed the now-false claims for three minutes and four seconds on Today and Nightly News.

With no evidence of malice, the networks uncritically assumed the worst. On the September 21, 2021 Today, co-host Hoda Kotb scolded, “But this morning, a new controversy: Shocking images of border agents appearing to whip migrants.”

On the September 20 World News Tonight, anchor David Muir seemed to try and convict the agents: “There are alarming images from the Texas border tonight. The White House pressed on them today, calling the images horrific. What were some border patrol agents doing?”

Anchor Lester Holt opened the September 21 NBC Nightly News promoting Biden’s relentless attacks on the men: “The President vowing to get the crisis at the border under control as outrage grows over these images, border agents on horseback confronting migrants.” Three days later, Biden deemed the agents guilty, saying at the White House: “It’s outrageous. I promise you, those people will pay.”

The September 22 World News Tonight featured reporter Kenneth Moton showing how quickly the investigation was moving. He noted that the Department of Homeland Security is “launching an investigation into these images, showing border patrol agents on horses, confronting migrants as they enter Texas from Mexico.” On September 23, WNT's Muir explained that DHS is “temporarily suspending the use of horses.”

But now, seven months later? Silence from the networks. On March 29, President of the National Border Patrol Council Brandon Judd concluded: “[Department of Homeland Security’s Office of the Inspector General] determined there was no criminal activity that was done so they closed out their investigation.”

The border patrol agents who were accused of whipping migrants coming across the border, that process has finished. They were not charged with wrongdoing. It would be nice of those that blamed them of wrongdoing from the White House would come out and admit that was a mischaracterization of what we saw at the border.

It would also be nice if journalists would come out and apologize for smearing these border agents with accusations of racist whipping attacks. They highlighted the accusations, claims that have now fallen apart. They need to cover the story, even if it makes Joe Biden — and the press — look bad.

The guilty conviction delivered last fall on ABC was sponsored by Prudential, on CBS it was Neutrogena, on NBC it was Geico. Click on the links to let them know what you think about these smears.