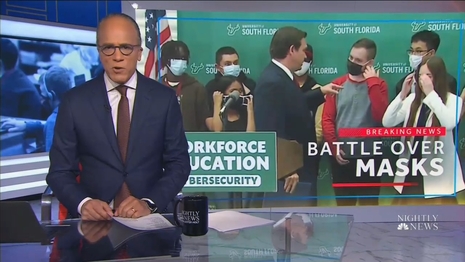 According to CBS and NBC, here’s what matters: Ron DeSantis “scolding” teens for wearing masks. What doesn’t matter? Issues like the many Hunter Biden scandals, the crisis at the border and critical race theory being taught in schools.

Last week, the Florida governor said to an event with high schoolers: “You do not have to wear those masks. I mean, please take them off.” He added, “So if you want to wear it, fine, but this is ridiculous.”

Here’s a flavor of the breathless hyping of a non-story:

On Thursday’s Nightly News, anchor Lest Holt blasted, “Outrage tonight from that scolding by Florida's Governor to a group of students because they wore masks, calling it political theater.”

Reporter Miguel Almaguer hyped, “Tonight more fallout after Florida Governor Ron DeSantis admonished a group of high school students Wednesday.” He ended the report with this ridiculously pompous close: “And while he won't wear a mask, tonight he is the face of controversy.”

NBC was the main force in making such a minor event an overheated big deal. Late Night host Seth Meyers played video of the moment and snarled, “How much of a dick do you have to be to yell at a bunch of high school students who are just trying to be safe?”

(Meyers has spent the first year of the Biden presidency sounding like a human DNC talking point machine.)

Though CBS gave the story considerably less time than NBC, the network still pushed it. On the March 2 CBS Evening News, reporter Mola Lenghi warned, “Today, Florida Governor Ron DeSantis admonished a group of students at the University of Florida for wearing masks.” The network covered it again on the March 3 CBS Mornings.

In total, the NBC and CBS morning and evening shows devoted three minutes to a relatively minor DeSantis exchange with teenagers. (This doesn't count the quick joke on Late Night. Also, ABC, unlike the other two networks, ignored the non-story.) Three minutes may not seem like much time, but consider the stories the networks have been burying:

Clearly, the above controversies, scandals and news stories are not priorities of the networks. Instead, an off-hand comment by the governor of Florida to some high school students gets more attention on five national news shows.

The promotion of a non-story into national news on NBC was sponsored by Ameritrade, Fidelity and Liberty Mutual. Click on the links to let them know what you think.

Here is the transcript for the March 3 NBC Nightly News. Click "expand" to read more.

LESTER HOLT: Outrage tonight from that scolding by Florida's Governor to a group of students because they wore masks, calling it political theater. It upset some parents and underscored the heated debate over masks. Here's Miguel Almaguer.

GOVERNOR RON DESANTIS: You do not have to wear those masks. I mean, please take them off.

DESANTIS: Honestly, it's not doing anything, and we got to stop with this COVID theater.

ALMAGUER: Highlighting yet again the bitter divide over face masks.

DESANTIS: So if you want to wear it, fine, but this is ridiculous.

ALMAGUER: And what they represent.

ALMAGUER: Eric Marshall was one of those students.

DAWN MARSHALL: I almost jumped out of my skin. I was really appalled.

ALMAGUER: His mother, Dawn who’s immunocompromised, was furious by what the Governor said.

MARSHALL: He took away my authority. He put my child at risk. He put me at risk because my child comes home to me.

ERIC MARSHALL: I was honestly not completely ready for it. I went to that USF press conference for thinking it was just a simple photo-op.

ALMAGUER: With mask mandates rolling back for the majority of the country, the CDC still recommends wearing them indoors where COVID levels are high, which is the case in Tampa, where the press conference was held. Today, Kate Snow spoke with CDC Director Rochelle Walensky.

ROCHELLE WALENSKY: So those students should have been comfortable wearing a mask. It is absolutely their choice.

ALMAGUER: Governor DeSantis doubled down today, calling masks political theater. Defending his comments and highlighting the incident in a fundraising letter. And while he won't wear a mask, tonight he is the face of controversy. Miguel Almaguer, NBC News.