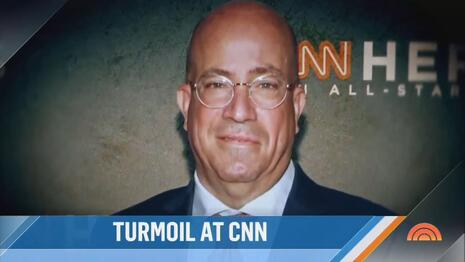 NBC on Thursday discovered the most disgraceful thing that ex-Today show producer Jeff Zucker did, now that he’s resigned from CNN after a sex scandal: Zucker hired Donald Trump back in the ‘90s.

The fact that Zucker also secured the career success of alleged sex abuser Matt Lauer went unmentioned by the Today show. Meanwhile, CBS’s Gayle King was “confused” about what the fuss is over Zucker.

Zucker left CNN on Wednesday as a casualty in disgraced Chris Cuomo’s war against his former network. It was announced that that Zucker had been hiding a consensual relationship with a vice president, Allison Gollust. However, on NBC’s Today, Emilie Ikeda revealed the real scandal:

Before CNN, the pair [Zucker and Gollust] starting their careers and climbing the ladder at NBC, Zucker as executive producer of the Today show and president and CEO of NBC Universal at the head when NBC hired Donald Trump as the host of The Apprentice. The relationship later souring as the former President’s relationships with the press and CNN turned contentious.

As Fox News pointed out in 2019, Zucker was also “the executive producer of Today when Lauer was hired in 1994.” But that point never came up on Thursday’s Today. (Unsurprisingly, the network erased Lauer from the show’s 70th anniversary celebration in January.) Instead, the most important thing to know about Zucker... is his connection to Trump?

Over on CBS Mornings, co-host Gayle King didn’t see what the big deal was over President Zucker and Vice President Gollust hiding a secret relationship, one that the fired-Chris Cuomo may have taken revenge over.

TONY DOKOUPIL: Workplaces used to be the number-one place to meet somebody. Times have changed.

NATE BURLESON: Not anymore. Thank you so much.

King’s reaction isn’t surprising. She previously co-hosted with the disgraced Charlie Rose, accused of sexual harassment and abuse by 27 women. On May 3, 2018, after the scandal was exposed, King whined on-air about having to cover it: “I don't know what to say about this.... I don't know what more we can do to Charlie Rose except a public flogging. He's gone.... I’m sick of handling it.”

After some blowback, she retreated on May 4, 2018, saying of the Rose inquiry: “Let the chips fall where they may.”

The hiding of any mention of Matt Lauer on NBC was sponsored by Ensure. On CBS, Gayle King’s comments were sponsored by Progressive insurance. Click on the links to let them know what you think.

TONY DOKOUPIL: CNN faces big changes this morning a day after its president, Jeff Zucker announced he's resigning. Zucker says he broke company policy by failing to disclose a consensual relationship with a longtime colleague, one of his top aides, at the company's highest level. As our national correspondent Jericka Duncan shows us, the issue came up during the investigation of former CNN anchor Chris Cuomo.

JERICKA DUNCAN: This is how CNN made the bombshell announcement.

BRIANNA KEILAR: We have news now to report involving our network. CNN President Jeff Zucker has just resigned after disclosing a consensual relationship with a colleague.

DUNCAN: Jeff Zucker admitted to violating CNN company policy, Wednesday, by not disclosing a consensual relationship with Allison Gollust. Gollust is CNN Vice President and the network's chief marketing officer. In a statement, Zucker acknowledged the relationship, saying, "I was required to disclose it began, but I didn't. I was wrong." He referred to Allison Gollust as his closest colleague and said the pair worked together for more than 20 years.

JEANNE CHRISTENSEN: It should have been disclosed.

DUNCAN: Attorney Jeanne Christensen specializes in employment discrimination. Many people will hear this and go, okay, two consenting adults, they're both in high-level management positions, what's the big deal?

CHRISTENSEN: The big deal is that —  not that they're two consenting adults. It's that CNN has a policy that you're supposed to disclose the fact that you are in such a relationship.

DUNCAN: Zucker's departure from CNN comes two months after he fired anchor Chris Cuomo. Cuomo was fired for advising his brother, former New York Governor Andrew Cuomo, on how to handle sexual misconduct allegations. Zucker was asked about his relationship with Gollust as part of CNN's Chris Cuomo investigation.

BRIAN STELTER: This is a domino effect that begins with Andrew Cuomo, going down the governor's office, then Chris Cuomo being fired from CNN, and then Jeff Zucker losing his job at CNN.

DUNCAN: In a statement, Gollust acknowledged the relationship and said she regretted not disclosing it at the right time. She says she will remain at CNN for now. Now, Christiansen told me it is highly unlikely two people at top positions or in the same department could ever stay on, even after they disclose a consensual relationship which, you know, this is part of the problem but also why people keep it a secret.

DOKOUPIL: Yeah. Workplaces used to be the number-one place to meet somebody. Times have changed.

NATE BURLESON: Not anymore. Thank you so much.

BURLESON: Yeah, you are right about that. 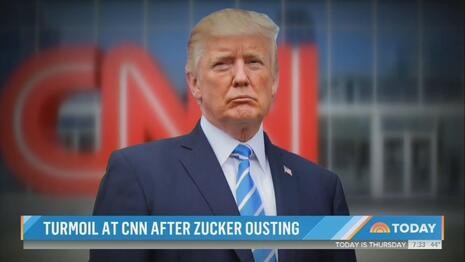 EMILIE IKEDA: Before CNN, the pair starting their careers and climbing the ladder at NBC. Zucker as executive producer of the Today show and president and CEO of NBC Universal at the head when NBC hired Donald Trump as the host of the Apprentice . The relationship later souring as the former President’s relationships with the Press and CNN turned contentious.

IKEDA: Gollust was an executive in the NBC communications department. She also briefly worked for former New York Governor Andrew Cuomo’s office in 2012, but jumped to CNN shortly after Zucker took the reins.