Remember CBS’s OTHER Botched Attempts to Take Down Powerful Republicans? We Do! 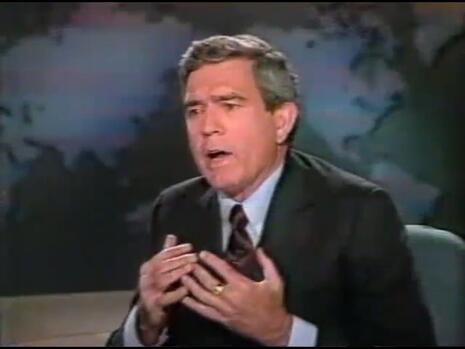 This week, an attempt by CBS’s 60 Minutes to destroy Ron DeSantis blew up as more details emerged over just how shoddy the network’s reporting was. Without evidence, 60 Minutes tried to suggest the Florida Republican Governor operated a pay to play scheme with a supermarket chain on vaccine distribution.

But if you know your history, none of this should be surprising about CBS. The network has a several decades-long history of trying to take out prominent Republicans with shoddy journalism. Here’s a look back at two: On Monday, January 25, 1988 Dan Rather, then the anchor of the CBS Evening News, laid a trap and attempted to ambush then-Vice President George H.W. Bush on live TV.

As I wrote on the 30th anniversary of the debacle for CBS, the segment was supposed to be a “candidate’s profile.” Instead, Rather screamed at the Vice President over the Iran-Contra scandal, making it the sole topic discussed. Visibly angry, he berated the Vice President: “You’ve made us hypocrites in the face of the world!”

But Bush didn’t just sit back and take the bias. The Republican shot back: “It’s not fair to judge my whole career by a rehash on Iran. How would you like it if I judged your whole career by those seven minutes when you walked off the set in New York?” Bush lowered the boom: “I have respect for you, but I don’t have respect for what you’re doing tonight!”

If you’re wondering what the burn was in reference to, In 2008, the MRC's Rich Noyes quoted from The Quest for the Presidency, recounting:

...a notorious incident several months earlier when Rather, on location in Miami, had got sore at having his newscast held up by a tennis match and had walked off his set to call New York to bitch about it.

The tennis match had ended in his absence, and CBS, with nothing else to put on the air, had gone to black — an empty screen — for six minutes. It was the ultimate embarrassment for a network...

It wasn’t the last time CBS would try to take down a Bush. As I wrote in 2019, on Wednesday, September 8, 2004, during a heated presidential election campaign 60 Minutes II aired a report, hosted by Rather, accusing Bush of trying to get out of Guard service. Rather claimed, “Tonight, we have new documents and new information on the president’s military service.”

Except, as many now know, those documents weren’t vetted by Dan Rather, producer Mary Mapes, or the executives at CBS. The shifting and unreliable stories of where the documents came from — and whether they were forgeries —  would ultimately take down Rather.

Here’s how the excellent Fox Nation documentary Black Eye: Dan Rather and the Birth of Fake News described it:

Soon, the story would blow up in the faces of CBS journalists as the claims behind them becoming more and more unreliable. The documentary shows the chaos behind the scenes as CBS attempted to vet the documents after the story aired.

(For more on this compelling documentary, see my 2019 review.)

So the fact that CBS has, yet again, used shoddy reporting to try and destroy a potential 2024 Republican presidential candidate should surprise no one. What’s surprising is that anyone would still trust CBS now.