FLASHBACK: DiCaprio Panicked It Was ‘Too Late’ to Save Earth From Climate Horror 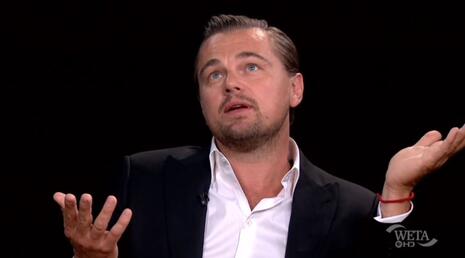 Liberal celebrities and journalists keep telling us that it’s “too late” save the Earth from the coming climate change horror. Well, in this week’s FLASHBACK we found movie star Leonardo DiCaprio worrying that very thing four years ago. On January 7, 2016, ABC’s Good Morning America used a child as a prop to fret about polar bears and global warming.

But first, the Titanic star appeared on the January 7 edition of Charlie Rose. Reflecting on the 2015 climate conference in Paris, the jet-setting actor pontificated, “The big question is are we too late? That's been the pondering question for everyone. I know we should all remain optimistic and I want to remain optimistic.” (It turns out, four years later, yes, the world still seems okay.)

Rose, who was not yet disgraced at that point over sexual misconduct allegations, did not question DiCaprio on his own carbon-creating lifestyle, taking six private jets in six weeks.

On the same day, the January 7, 2016 Good Morning America, co-host Lara Spencer highlighted an emotional child worried that global warming would keep polar bears from eating. Spencer talked to Bernadette Woods Placky of the website Climate Central and hyperventilated: “Is this the kind of thing that people who live on the coastline should be panicking and moving inland?”

Embracing the idea of manipulating children, Spencer played this clip of a little girl: “I really want the polar bears to have food to eat so that they won't be – so they won’t be hurting. I don't know how to fix it and I really want to.”

As Joe Biden takes office, be prepared for another expensive global warming push that liberals in the media and in Hollywood will aggressively support.

A partial transcript is below. Click "expand" to read more.

CHARLIE ROSE: But you were worried that we are too late. That somehow we've done so much damage we can never —

LEONARDO DICAPRIO: The answer to that is in somebody else's hands. But we do know that the scientific community has been screaming out loud for decades. And other interests have stifled their voice and manipulated this conversation. And it's a real shame. But one thing I'm proud of, that for the first time, we've seen the world community take this issue seriously.

And if they hadn't, there would be absolutely no hope. We can't wait another four years for people to start to listen to 99 percent of the scientific community. I mean, it's an absurdity. And it's not about the individual anymore. It's about we. It's about we as a species, as a world community, finally coming together to make some sort of progress forward. Whether we're too late or not remains to be seen. But you know, I'm just very happy as an environmentalist to see something happen in the right direction.