When it comes to the so-called mainstream media, it’s a case of Kanye West vs. Kanye West. The networks on Thursday and Friday mocked the “bizarre,” “surreal” rapper for appearing at the White House with Donald Trump. But these outlets gushed over the “thoughtful” entertainer when he derided then-President George W. Bush as a racist.

On Friday, Good Morning America journalists used hyperbolic language about the visit. Guest co-host Cecilia Vega opened the program by freaking out: “Also this morning, that stunning scene in the Oval Office. Kanye West taking center stage praising President Trump.” Vega marveled at the “surreal scene in the Oval Office that has everyone talking.”

Over on CBS This Morning, Major Garrett mocked West’s affinity for Trump: “With the ‘Make America Great Again’ hat, West went all hero worship on the President.” On NBC’s Today, co-host Hoda Kotb chided: “President Trump sitting down in the Oval Office with Kanye West, who launched into a lengthy and bizarre speech.” (MSNBC saw West as “bonkers” and “crazy.”) 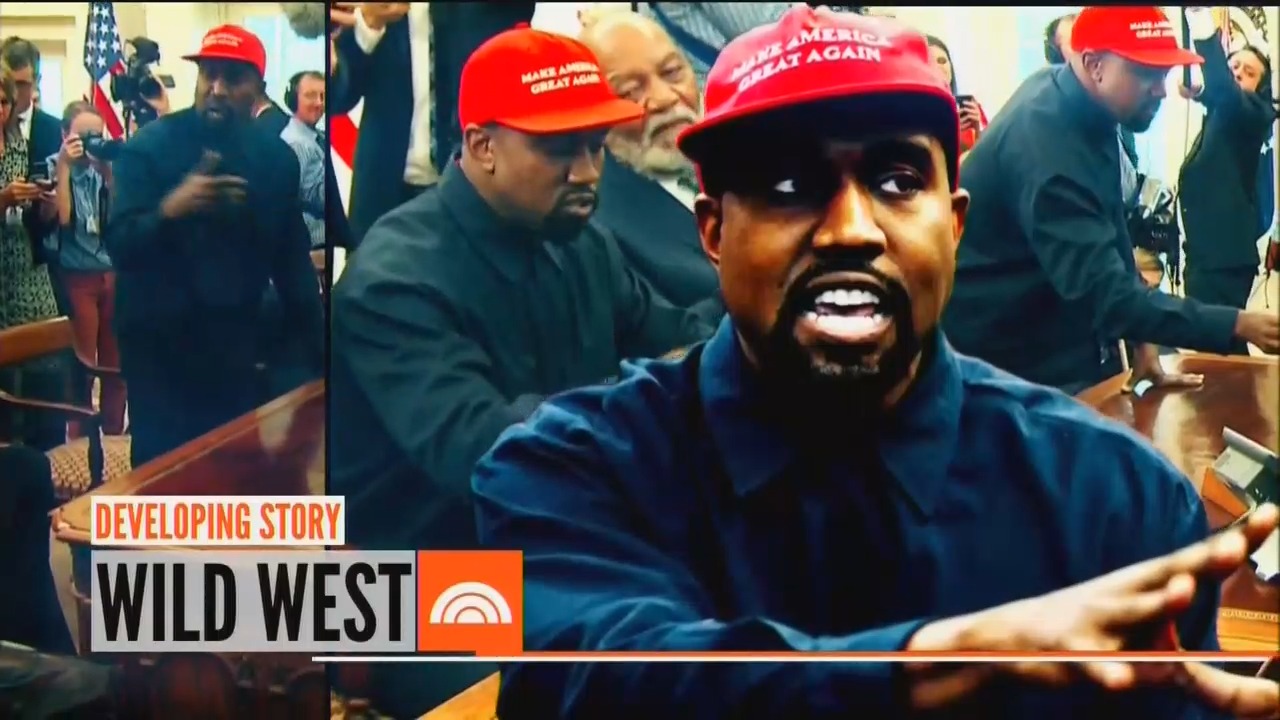 With his discussion of Superman and I.Q. tests, there’s no doubt West’s monologue had a lot of weirdness to it. But this isn’t how journalists reacted to a previous, out-of-left-field outburst by the rapper. In 2005, he turned a fundraiser for Hurricane Katrina into a platform to slam President Bush, sneering, “George Bush doesn’t care about black people.”

ABC’s Terry Moran in 2007 was enthused over that, saying that the remark turned West “into a cultural force to be reckoned with” and extolled the “complex and thoughtful pop star.” Moran gushed: “He's a very interesting figure on the cultural landscape, a complex icon of music and style.”

In 2010, the not-yet-disgraced Matt Lauer grilled Bush on West’s comments, taking it seriously and using it as a hammer to knock the ex-President. Speaking of NBC, the stars of Saturday Night Live now seem to be embarrassed by West. But in 2010, the comedy show invited West back on to reprise his attack on Bush.

For an additional contrast, the networks this week were thrilled with Taylor Swift coming out to oppose Republicans in the 2018 midterms. If the singer ever cozies up with a Republican, don’t expect that excitement to continue.

Partial transcripts from Friday are below

KAYNE WEST: It was something about when I put this hat on, it made me feel like Superman.

VEGA: Then sounding off in an expletive-laced monologue even leaving the President speechless.

VEGA: It is that surreal scene in the Oval Office that has everyone talking. Kanye West launching into a monologue about, well, frankly, just about everything.

HODA KOTB: Now to the White House meeting that has everyone talking. President Trump sitting down in the Oval Office with Kanye West, who launched into a lengthy and bizarre speech. NBC White House correspondent Kristen Welker has more on that.

MICHAEL ERIC DYSON: This is white supremacy by ventriloquism. A black mouth is moving but white racist ideals are flowing from Kanye west's mouth.