Providing an assist to Hillary Clinton, CBS This Morning’s Nancy Cordes on Wednesday flatly declared Donald Trump’s attacks on her are “unfounded.” Discussing the “political firefight” in the wake of the Orlando terror attack, Cordes parroted, “Hillary Clinton waded in, Tuesday, accusing Donald Trump of, quote, ‘bizarre rants’ on the topic and batting back his unfounded claim that she wants to abolish the right to bear arms.”

The journalist then uncritically played a clip of the Democrat insisting, “He said I'll abolish the Second Amendment. Well, that's wrong.” It’s true that Clinton never said those exact words. However, on June 5, the candidate refused to call gun ownership an individual right.

In leaked audio from a 2015 fundraiser, she declared the Supreme Court “wrong” when in regards to the landmark 2008 Heller decision. So, calling Trump’s concern “unfounded” is a simplistic explanation that offers spin for Clinton’s clear anti-gun record. 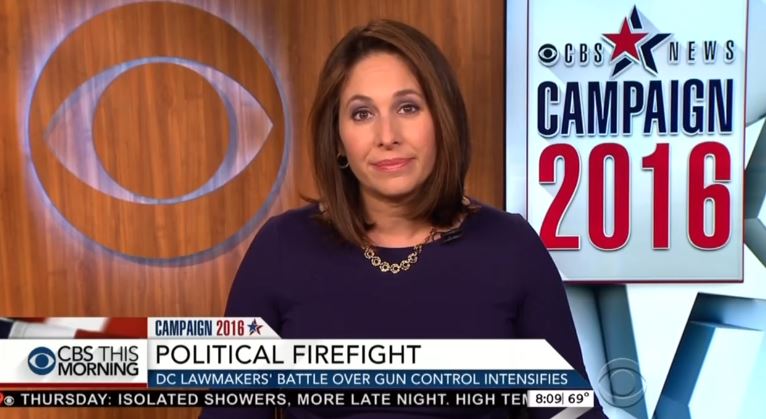 Cordes grilled Republican Senator John Cornyn: “Do you think that the founders anticipated assault weapons that could very quickly kill 50 people?” She also pushed moderate Democrat Joe Manchin on whether he would be rethinking his opposition to an assault weapons ban.

Later in the show, author Malcolm Gladwell appeared and offered a rare dissent, a less than full-throated support for new restrictions: “I think gun control has a place, but let's not kid ourselves that if we pass the strictest gun control in the world that we would end this particular behavior.”

On Tuesday, CBS This Morning co-host Gayle King pleaded, “What will it take to move the needle” on gun control? 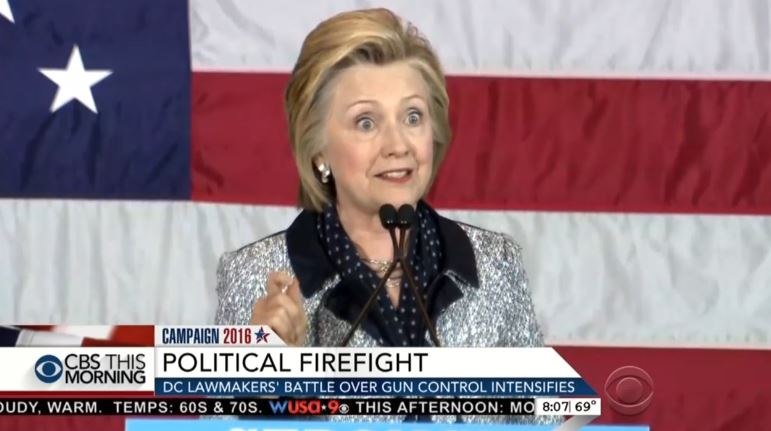 JOHN HEILEMANN: The Orlando attack has renewed the gun control debate on Capitol Hill. Senate Republican leader Mitch McConnell now says he would be open to serious suggestion business stopping terrorists from getting guns. But the two parties do not appear close to a compromise. A recent report reveals how 91 percent of people on the terrorist watch list who tried to buy a gun were able to do so. Nancy Cordes shows how the argument is returning to the presidential race. Nancy, good morning.

NANCY CORDES: Well, it is one of the most contentious issues on Capitol Hill and now in the presidential race. Hillary Clinton waded in, Tuesday, accusing Donald Trump of, quote, "bizarre rants" on the topic and batting back his unfounded claim that she wants to abolish the right to bear arms.

CORDES: Speaking in Pittsburgh, Clinton said she favors a return to the ban on assault weapons and restrictions for those on the no-fly list.

CLINTON: People being watched by the FBI for suspected terrorist links can buy a gun with no questions asked. That is absurd.

CORDES: Democrats on Capitol Hill chimed in, pointing to a new federal report that shows in the last year alone, people on the terrorist watch list were able to pass federal background checks and buy a gun in 223 cases out of 244 attempts.

SENATOR CHUCK SCHUMER: Let our Republican colleagues contemplate that. They want to fight terrorism, but they say they're going to continue a situation where 91 percent of suspected terrorists can get a gun.

CORDES: Republicans have their own bill they say would do the same thing while making sure those denied a gun have a right to appeal it. An assault weapons ban, they say, would be unconstitutional. [To Senator John Cornyn] Do you think that the founders anticipated assault weapons that could very quickly kill 50 people?

SENATOR JOHN CORNYN: Right now, our Democratic friends seem to be more interested in opportunistically using this tragedy to advance their agenda rather than looking to work with us to solve problems.

UNIDENTIFIED: The amendment is not agreed to.

SENATOR JOE MANCHIN: The reason I had, at that point, and the reason I still would be cautious about that from that standpoint— is that I know with the AR-15 that they're talking about, the type of weapon and what it's used for, the people that go hunting —  we don't use that type of gun. But there's an awful lot of people who do collect and go sport shooting. They use it for very legitimate, very legal way.

CORDES: Senator Manchin did co-author legislation to close loopholes in background checks after the Sandy Hook massacre, and it was seen as the best chance for a bipartisan compromise back then. But it also failed. He's hoping this tragedy could give it new life.