Jorge Ramos: The Job of Journalists Is to 'Denounce' Trump's Positions

Fresh from his confrontation with Donald Trump on Tuesday night, activist reporter Jorge Ramos appeared on ABC and CBS to pitch the idea that it's the job of journalists to openly oppose the candidate's positions. On Good Morning America, Wednesday, he asked colleague George Stephanopoulos, "We have to denounce that he wants to deny citizenship to children being born here."

He added, "They're citizens, just like [Trump's children], and it is impossible to build a 1900-mile wall... So that's the kind of questions that I was asking Mr. Trump." Of course, those were statements and not questions. Lobbying for more subjectivity in the press, Ramos declared, "...I think the best journalism happens when you take a stand... We are not only required, but we are forced to take a stand."

To his credit, Stephanopoulos actually challenged this and reminded: 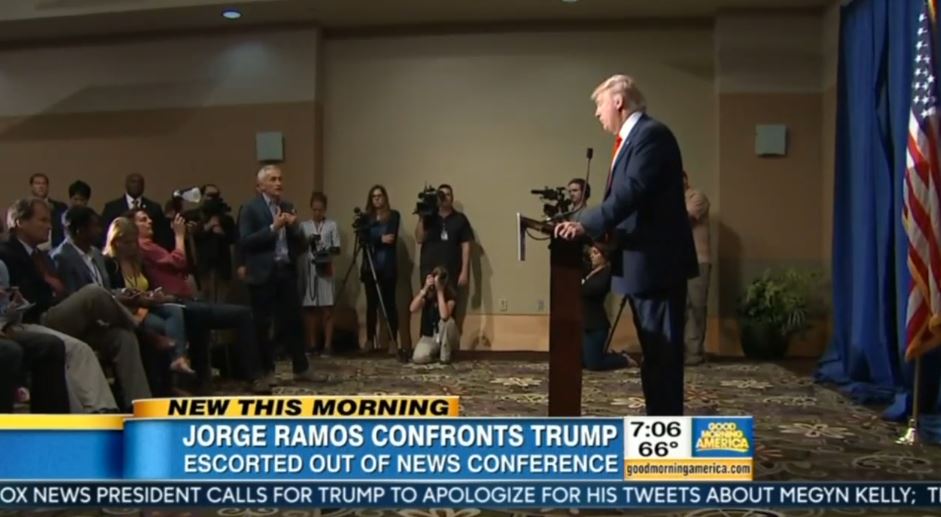 GEORGE STEPHANOPOULOS: You pressed him hard with those questions. You have also had tough things to say about Mr. Trump. On CNN you said he was the loudest voice of intolerance, division and hatred right now in America. So, how do you respond to some of your critics like Sean Spicer, the chief strategist of the RNC, who says you're more advocate than journalist?

Over on CBS This Morning, Ramos again proved he is much more interested in pushing an agenda and opinion. Taunting Trump, the reporter insisted that the candidate can't win: 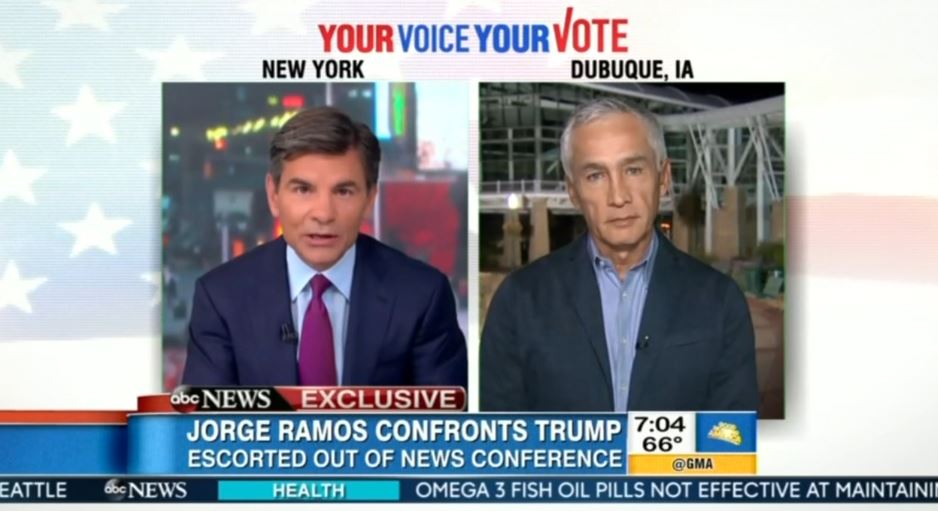 Regarding Ramos's ejection from the press conference, co-host Norah O'Donnell wondered, "So, were you there to pick a fight?"

Ramos has a long history of pushing agenda-driven journalism – and not just on the issue of immigration. On the December 10, 2014 edition of GMA, he asked Barack Obama if George W. Bush "betrayed American values."

A transcript of the August 26 GMA segment is below:

GEORGE STEPHANOPOULOS: And the man of the moment, Jorge Ramos joins us right now and, Jorge, you said in that piece you've never seen anything like this before. But is it what you were expecting given the disputes between Univision and Mr. Trump? 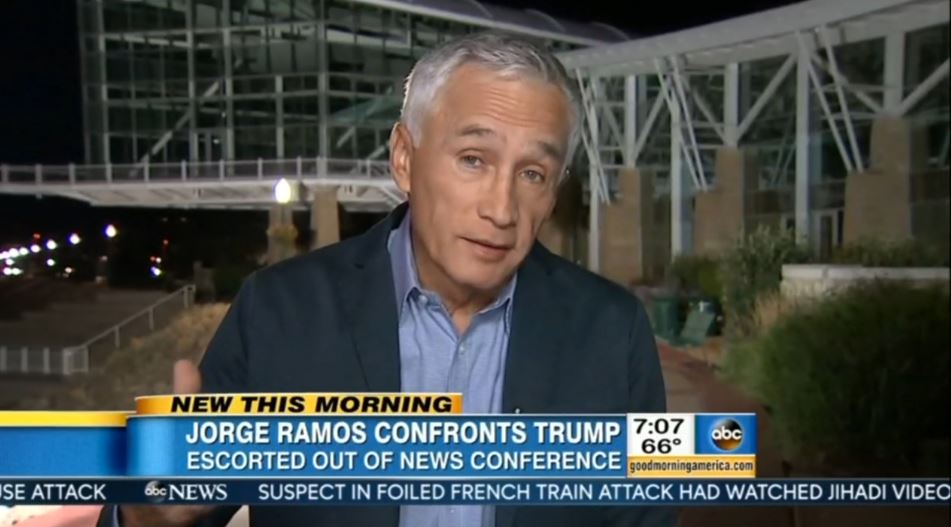 JORGE RAMOS: No, what I would expect is that I can ask a question as a journalist because that's our responsibility and I would expect Mr. Trump to answer honestly about what he really wants to do, because he hasn't given us the specifics. And I saw your show on Sunday and you pushed him on how he's going to deport 11 million undocumented immigrants and he didn't answer your question and he didn't answer mine. But I didn't expect to be thrown out of a press conference. Never in my life, and I've been a journalist more than 30 years, I've been thrown out.

RAMOS: It is very clear with his body language that he was going orders and I did wait for my turn. You know how it is in those press conferences. Two reporters before me ask a question and then I said I have a question on immigration. He didn't say anything. I stood up. I started my question. He didn't like my question and when he didn't like my question then he motioned so the one security guard would come where I was and then threw me out of the press conference.

STEPHANOPOULOS: So, hat did the guard say to you? What did they do and what happened backstage?

RAMOS: I waited outside and then my other colleagues also confronted Donald Trump and somebody from his campaign came out of the room, told me if I wanted to come in and ask my question and I did. Of course, I went -- I came all the way to Iowa to do that. Remember, I tried to have an interview with Donald Trump. He didn't allow me to have an interview. He published my cell phone. That's what I wanted to do. So, I came back and asked those questions.

STEPHANOPOULOS: He eventually did take your questions at the press conference, as you say. Have you heard anything else from him or his team?

TRUMP: No, I didn't hear anything new. He has to explain how he wants to deport 11 million people. Can you imagine? How is he going to do that? Is he going to put people in stadiums? We have to denounce that he wants to deny citizenship to children being born here. They're citizens, just like his and it is impossible to build a 1900-mile wall between Mexico and the United States. So that's the kind of questions that I was asking Mr. Trump and obviously he didn't give any answers.

STEPHANOPOULOS: You pressed him hard with those questions and have had also tough things to say about Mr. Trump. On CNN you said he was the loudest voice of intolerance, division and hatred right now in America. So, how do you respond to some of your critics like Sean Spicer, the chief strategist of the RNC, who says you're more advocate than journalist?

RAMOS: What I would say is that as a journalist, you have to take a stand. I think the best journalism happens when you take a stand and when it comes to racism, discrimination, corruption, public lies, dictatorships of human rights, as journalists, we are not only required but we are forced to take a stand.

STEPHANOPOULOS: Think Mr. Trump would give you an interview now?

RAMOS: He didn't want to give me an interview before. But right after the interview, he said, "we'll talk." So let's see if he keeps his promise. I'm not sure.

STEPHANOPOULOS: Jorge Ramos, thanks for your time this morning.

STEPHANOPOULOS:  A lot of people would watch that interview.

ROBIN ROBERTS: I'm sure they would.