The journalist rhapsodized, "Along the way, for many millennials and for the media elite, Stewart came to be regarded as a beacon guiding his viewers through a sea of spin and cynicism." Speaking of a man who once brought in a choir to sing "go f***k yourself" to Fox News, Connelly fawned that Stewart is "a true 21st century anchor."

As though he were hosting Access Hollywood, the reporter lauded the "profundity" of the comic and added, "Stewart's protean talents made for insightful and seriously funny televison." 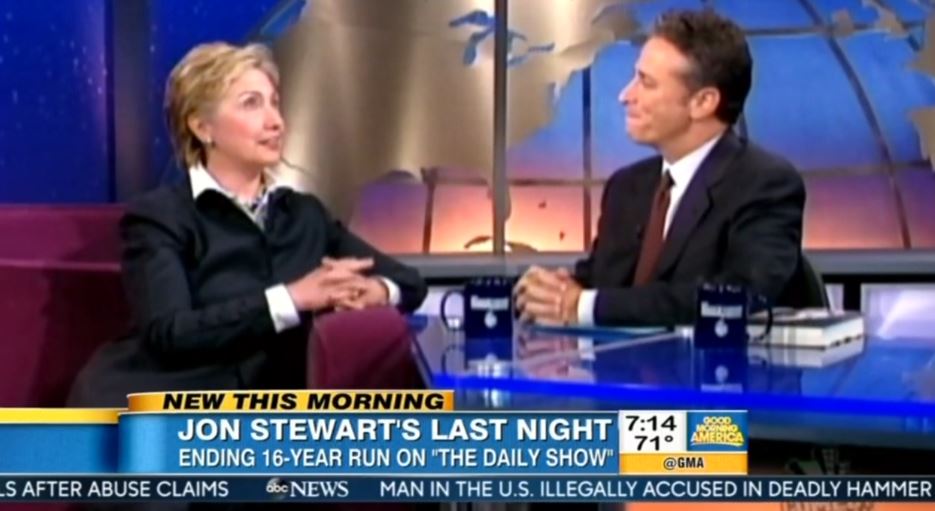 On NBC's Today, Savannah Guthrie worried, "Tonight, he signs off and late-night TV will never be the same." Willie Geist insisted, "Stewart went from respected stand up comic to cultural icon." Unlike GMA, however, the host noted that "Stewart... leans left, but President Obama was not safe either."

Really, Obama wasn't safe? Is that why the comedian was "summoned" to the White House for "secret" meetings with the President?

CBS This Morning offered the most coverage, nine minutes and 21 seconds. Vinita Nair highlighted the entertainer's "journey from comedian to one of America's most trusted voices." Journalist Vladimir Duthiers attempted to spin Stewart as bipartisan, redefining the deeply liberal comic: "On his own show, Stewart used his satirical anchor chair to lob bombs at the media and politicians alike." 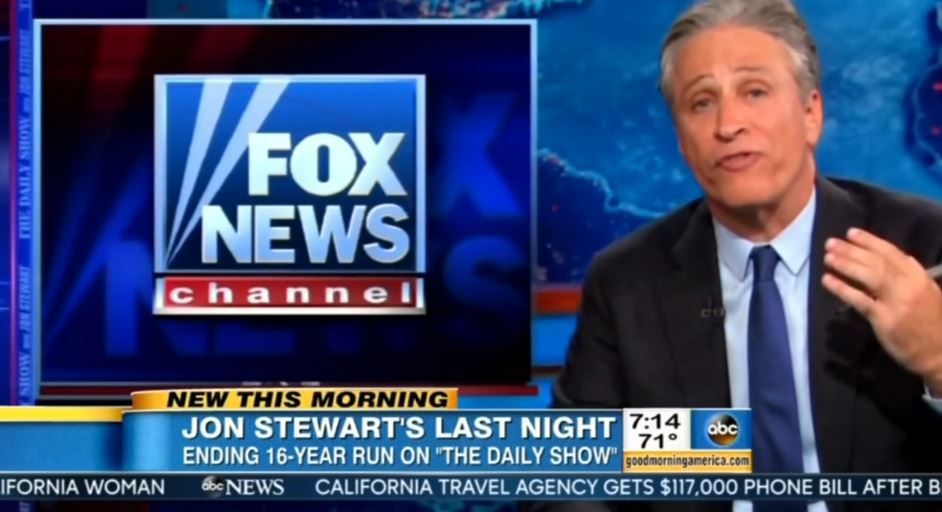 However, Stewart's hard-left ideology is more than enough reason for the networks to mourn his loss.

A transcript of the August 6 GMA segment is below: 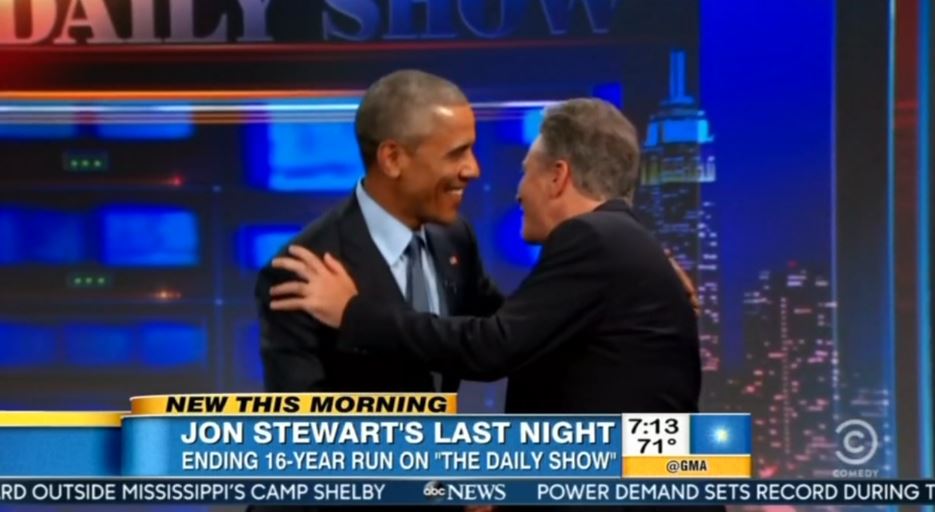 LARA SPENCER: Turning to you to the end of an era. Jon Stewart signs off as host of The Daily Show tonight, a job he's been doing since 1999. Our Chris Connelly looks back at some of Stewart's best moments behind the desk.

CHRIS CONNELLY: That was 16 years ago.

STEWART [montage]: Am I crazy? A wicked tongue.

CONNELLY: Tonight, Jon Stewart's last as host of The Daily Show ending a run that saw the former MTV star deploying smarts and a BS detector to become one of the most trusted sensibilities in TV news.

GLENN BECK: Progressives think they know better than you do.

STEWART: I didn't know that's what I wanted. But I guess I want to control every aspect of your life!

CONNELLY: With wit and wisecracks and savage parody.

STEWART: Are you willing, Mr. President, to trust Governor Bush with our foreign policy?

GEORGE W. BUSH: I am not willing to take that chance again, Jon.

STEWART: The view from my apartment was the World Trade Center and now it's gone.

CONNELLY: Whether he was interviewing a fellow comic like Louis CK.

STEWART: I've been on Letterman a bunch of times, I don't think I ever touched his face.

STEWART: Let me deflate the tension right off the bat. Apology accepted.

BARACK OBAMA: I can't believe that you're leaving before me.

CONNELLY: Along the way, for many millennials and for the media elite, Stewart came to be regarded as a beacon guiding his viewers through a sea of spin and cynicism and by others more as the relentless nemesis of Fox News.

STEWART [talking to O'Reilly]: I know you're very frightened and I want to tell you everything is going to be okay. There you go, baby. Get that going. Settle down..

CONNELLY: Though this comic Trevor Noah will assume the Daily Show chair, in the minds of his fans, Stewart remains impossible to replace. A true 21st century anchor.

STEWART: It's been an absolute privilege. It's been the honor of my professional life.

STEPHANOPOULOS: Complete path breaker. Brought something brand new to new to all of us.

SPENCER: So well respected. Always said, "Oh, I'm a comedian." But so much more than that. He'll be missed!