The hosts and journalists of MSNBC seem to have found a new Republican favorite, one in the mold of 2012 moderate Jon Huntsman. Daughter Abby Huntsman, a co-host on The Cycle, lamented presidential primary politics, sneering, "You have got to be an entertainer. You've got to feed the far-right what they want."

According to Fineman, the problem with the Huntsman candidacy wasn't that he ran as a moderate in conservative primaries. Instead, the journalist lamented, "Well, to both praise your dad and criticize the current process, [Kasich] can't be as nice as your dad."

The Huffington Post journalist has previously assailed conservative Republicans, worrying that "xenophobia" sells for the "nativist" GOP base. 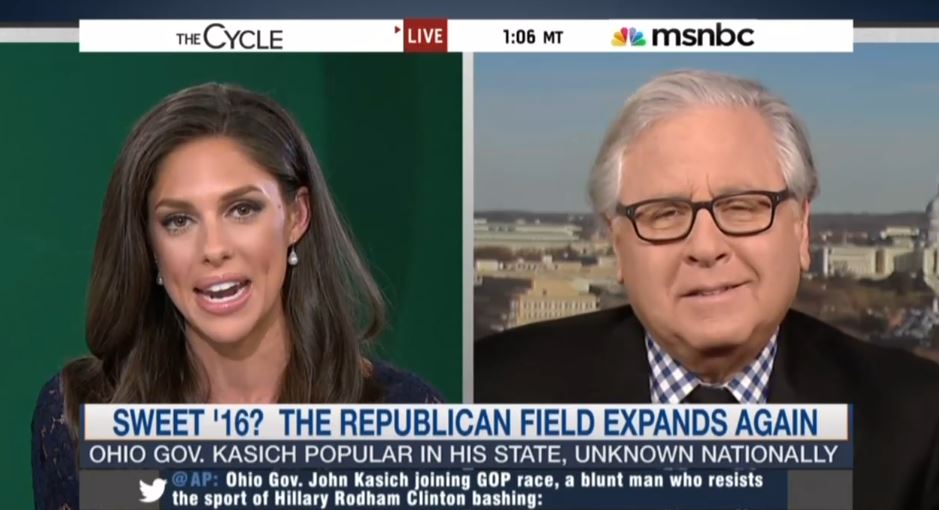 HOWARD FINEMAN: I know Kasich. I covered him when he was in the Congress. He's a serious guy who thinks about issues seriously. And as Kasie also said, he is from Ohio. I would keep him on the radar screen, whatever happens with whether he gets into the debate in Cleveland.

ABBY HUNTSMAN: Yeah, certainly anything could happen at this point in the race. I've got say, Howard, though, this does remind me an awful lot of my dad running for president four years ago. I know the media had some  fun with this. I tweeted out this morning when he was announcing. He's got the same team. 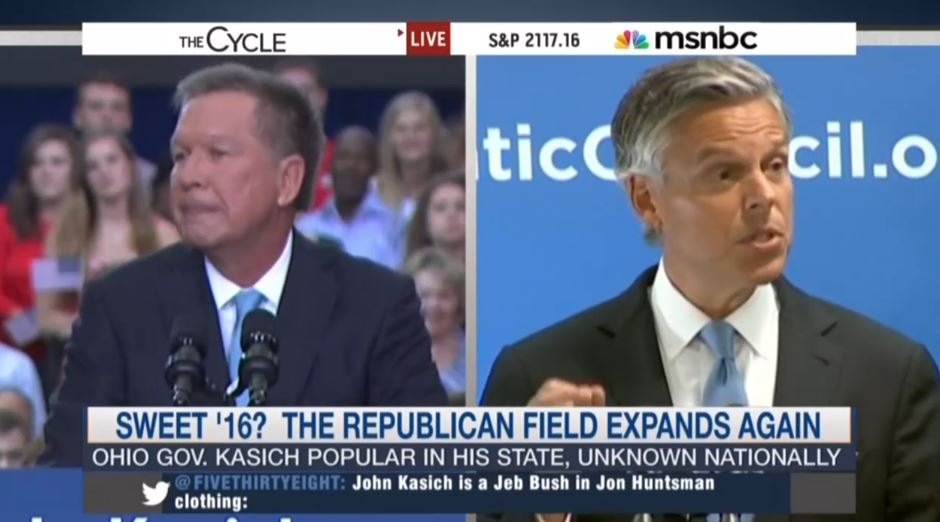 HUNTSMAN: Very similar timing late in the race. Similar strategy. I said I hope it does ends better for him.

HUNTSMAN: I'll leave that rant for another day. I will say, and you were hitting on this [picture of Huntsman family on screen] --

TOURE: Look at that pretty family.

HUNTSMAN: My dad and Kasich are similar in the sense that they are pragmatic, conservative problem solvers.

HUNTSMAN: They've proven they know how to govern in the past. Two term governors. Both worked under Reagan. Both would probably make very good presidents. But as you know, being a good president is very different from being a good candidate. You have got to be an entertainer. You've got to feed the far-right what they want.

HUNTSMAN: You've got to sometimes say things you don't always agree with. What can Kasich learn? And I'm going to put you on the spot, what can he learn from my dad four years ago that--  where he could just pop this time?

FINEMAN: Well, to both praise your dad and criticize the current process, I think he can't be as nice as your dad. I think your dad was a gentleman on the campaign trail. And we all know what happens to gentlemen on the campaign trail. They get run over. I think Kasich's a fighter. I think he is from a big eastern to east-midwest American state, Abby. That makes a difference. I also think he's from a big eastern to east-midwest state, Abby. And I think that makes a difference. I think he's had to contend with tough Democrats, with labor unions, with all of the sort of panoply of minority groups and interest groups that make up the country. Ohio is a microcosm of the country. And Kasich a 60 percent  approval rating in a state that's a microcosm, demographically, of America. He's tough and a fighter.