On Thursday, the general consensus around the table on Morning Joe was that Justice Ginsburg’s recent comments on Republican presidential nominee Donald Trump were inappropriate and misplaced.  While host Joe Scarborough joked that Ginsburg’s comments were a symptom of her “miss[ing] Scalia” he reiterated the reality that her actions walk the thin line of “ethical violations.” Similar to MSNBC’s Andrea Mitchell, who “set the record straight” in defense of Ginsburg, co-host Mika Brzezinski danced around the issue and suggested “maybe it was a mistake?”

JOE SCARBOROUGH: We're talking about ethical violations. I mean you as a judge, a federal judge, are not to choose sides in campaigns.

MIKA BRZEZINSKI: Well, she just did.

NICHOLAS CONFESSORE: She is not bound by the same rules—

SCARBOROUGH: As the lower. The Circuit courts.

CONFESSORE: —the circuit courts, but, still. I have to say, it’s a real break from the norm.

After the panelists couldn’t help but laugh over the “Darth Bader” New York Post cover mocking Ginsburg, Nick Confessore brought the conversation back and reminded viewers that Supreme Court justices are not paid to provide commentary on presidential elections.

SCARBOROUGH: But how do you tell circuit court judges you can't do this, but the Supreme Court— 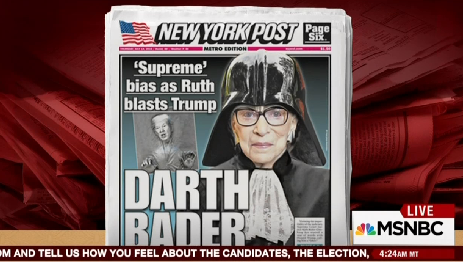 CONFESSORE: I don't think Americans want to see Supreme Court judges doing hot takes on the presidential campaign. [Scarborough laughs] And that's what she's doing. He’s got an ego. Who--this is not what you are paid to do.

BRZEZINSKI: Aw, maybe it was a mistake.

Aw, maybe it was intentional. Ginsburg’s comments were clearly targeted, as she consistently spoke out against Trump to the Associated Press, CNN and the New York Times alike. Perhaps it would have been a “mistake” if a Washington insider overheard Ginsburg saying these comments in a more private forum, much like the scenario where Sandra Day O’Connor was overheard groaning about “four more years” at a cocktail party when it looked like Al Gore was going to win in 2000.

SCARBOROUGH: You know, John Meacham, I remember cringing when reading a report that Sandra Day O’Connor while watching returns in 2000 actually groaned when it looked like Al Gore was going to win and said to her husband, I guess we're going to have to be here for four more years.

MEACHAM: Yeah, I think so. And I think it's not a great moment for the court. We're at a point, as we all know, where the institutions of the country aren't trusted. I mean, congress I think has an approval rating within the margin of error and the court is already politicized with the fact that there are eight members and nobody wants to have hearings, on, on, or the Republicans don't want to have hearings on judge Garland. So I don't think this helps the overall enterprise suggesting the court is above politics which is a useful myth.

Ginsburg must have felt the heat coming from Democrats and Republicans alike rebuking her comments, because as of this morning the justice switched gears and expressed “regret” for her remarks, insisting that “Judges should avoid commenting on a candidate for public office.” Unfortunately, it’s too little too late, as the damage is already done.