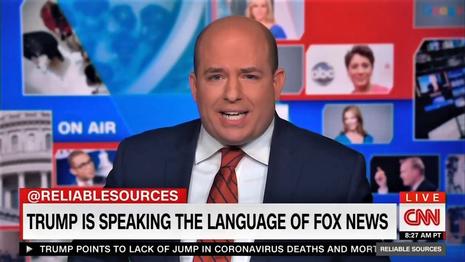 Brian Stelter's seething hatred for Donald Trump and Fox News came through again on Sunday's Reliable Sources as he uncorked his thesis that "President Trump only seems to make sense if you know how to speak the Fox language." Does Stelter really need a "translator"?

He claimed that people worrying that children are being taught America has been a horrible country makes no sense, but "it does make sense if you go to Laura Ingraham School, where it's all about grievance politics, victimhood, threats to old-fashioned conservatives and I might add white America."

He might need a conservative to point him to who's not a conservative. "In the words of the conservative critic, David Frum, the trouble is that even though GOP elected officials are now locked in a Fox-created bubble of unreality. Outside that bubble, vandalism of statues looks like petty criminality, a minor local issue.  But inside the bubble, it is all statues 24/7."

As if CNN and the rest of them haven't fixated on how Trump is allegedly only railing in favor of Confederate statues.

Stelter read the latest headline from the Associated Press: "'For the nation's birthday, Trump sees enemies -- slams the enemies within.' He sees enemies among fellow American citizens. And that's a lot like how Fox primetime sees the country."

That's an odd take. Stelter's show could be called The Enemy Within....The White House. Stelter then introduced his guest: "Let's talk about this warped view of reality and history with CNN presidential historian Douglas Brinkley."

STELTER: Don't Trump voters want dark and divisive? Don't they believe they're at war against liberals, and so, they like when the President talks this way?

DOUGLAS BRINKLEY, CNN PRESIDENTIAL HISTORIAN: Yes. Donald Trump is the Infowars President. He's a conspiracy theorist, and he works to divide and dis-unite the country. The Mount Rushmore speech was aimed at Donald Trump kind of claiming all the statues of America's past as if he has powers to help Thomas Jefferson and George Washington and I will protect them against these evil, pitchfork, anarchist Americans that are trying to loot and burn the streets down.

And that was the calm part! CNN somehow thinks it's not dark and divisive to suggest the president thinks black protesters should be exterminated!

BRINKLEY: What's happening is that Donald Trump is Joe McCarthy. He's creating, like what you said, an anti-communist hysteria that you had to smear people in Hollywood that were once socialist or you had to fire people that were in a union that used to like the old IWW.

I mean, it was -- it was awful in the 1950s, but alas, McCarthy wasn't President of the United States. We are now seeing McCarthyism running out of the White House. And so the smearing of Black Life Matters, which is a peaceful protest organization, very articulate and well- educated thinkers that have been touting James Baldwin as their hero are suddenly being marginalized and smeared by the President of the United States as being almost vermin that needs to be exterminated.

This is hardly the first time Brinkley has made such outlandish statements. During an appearance on The Lead With Jake Tapper last summer, Brinkley compared Trump to McCarthy and lumped him in with the late segregationist George Wallace for good measure.

Stelter confessed that he was more than halfway through the show and hadn't mentioned Joe Biden, so Stelter and Brinkley expressed joy at how much calmer and better he would be. Stelter concluded "My favorite headline this week was in the Washington Post that said, Joe Biden rises with a Less is More campaign. And that just speaks to the idea that a lot of people are exhausted and just want Less is More for politics right now."