MRC Study: Challengers to Clinton and Trump Get Just 0.03% of TV News Airtime 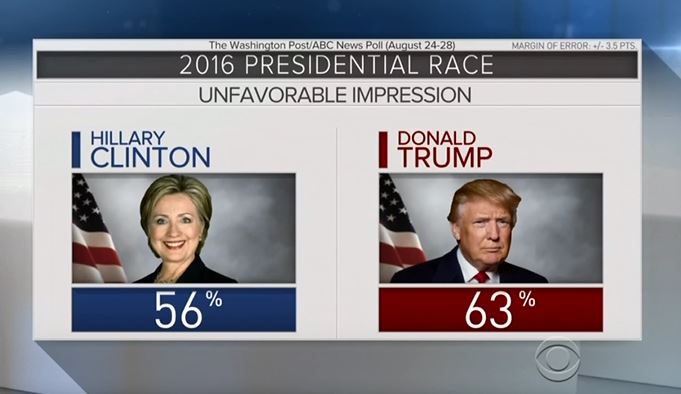 Not since Ross Perot in 1996 has a third-party presidential candidate polled as strongly as Libertarian nominee Gary Johnson is right now — he’s currently averaging more than eight percent, according to RealClearPolitics. At the same time, other polls show record levels of voter disapproval for the Democratic and Republican nominees Hillary Clinton and Donald Trump.

In spite of this, the broadcast network evening newscasts are essentially blacking out the existence of alternatives to Clinton and Trump — a potentially fatal blow to candidates who are required to average 15 percent support to qualify for the upcoming presidential debates.

MRC analysts examined all 1,713 campaign stories on the ABC, CBS and NBC evening newscasts from January 1 through August 31 (1,472 full reports, 104 brief items and an additional 137 stories on other topics that included some discussion of the campaign or candidates).

Not surprisingly, Trump has drawn most of the attention: 1,773 minutes of evening news airtime during the first eight months of the year, far ahead of Clinton’s 1,020 minutes of coverage. Since the primaries ended on June 7, the networks’ focus has stayed on Trump, who received 705 minutes of coverage — much of it about various controversies — vs. 437 minutes for Clinton.

But compare those totals to the third party or independent candidates: Thus far in 2016, Johnson has received a mere 11 seconds of evening news coverage — just a single sentence on the NBC Nightly News as he was formally nominated back in May. That means Clinton has received more than 5,000 times more coverage than Johnson, while Donald Trump garnered nearly 10,000 times more evening news airtime than his Libertarian challenger.

To date, neither ABC nor CBS has mentioned Johnson’s candidacy on their evening newscasts, although  ABC has hosted him on This Week, and he’s been discussed on CBS’s Face the Nation and CBS This Morning.

Green Party candidate Jill Stein has fared even worse, drawing a paltry three seconds of discussion in August on the NBC Nightly News. Stein’s name wasn’t even mentioned; in his report, NBC’s Jacob Soboroff included the response of a voter in Iowa to the question of whether she supported Clinton or Trump.

While Stein was a guest on ABC’s This Week, like Johnson, ABC and CBS evening news viewers have yet to hear about her candidacy. 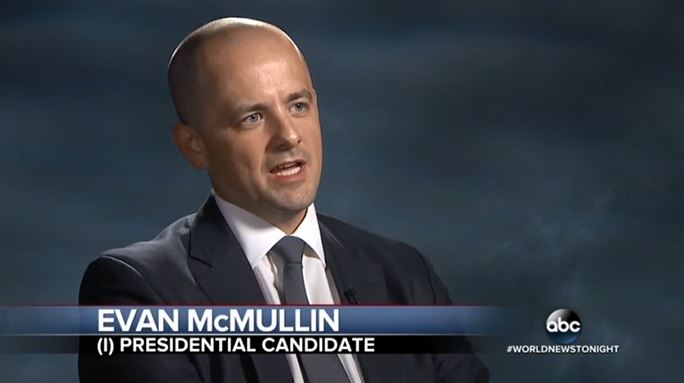 The story is similar for conservative independent Evan McMullin, who hopes to pull votes from Republicans fiercely opposed to Donald Trump. When he launched his candidacy in early August, ABC’s World News Tonight devoted 32 seconds of a larger campaign segment to McMullin.

Reporter Tom Llamas suggested he was a spoiler: “What do you say to Republicans who support Trump, who say a vote for you is gonna be a vote for Hillary Clinton?” McMullin replied that Trump had spoiled his own candidacy: “He’s alienated broad swaths of our population. Donald Trump cannot win.”

The third party possibility that drew the most attention this year was former New York City Mayor Michael Bloomberg, whose primary season flirtation with a possible independent challenge drew roughly eight minutes of evening news airtime — on all three networks — before he opted not to run.

Writer David French, whose name was put forward as a potential conservative independent candidate before McMullin, garnered 32 seconds of airtime on ABC’s World News Tonight. Constitution Party candidate Darrell Castle, who is on the ballot in 29 states, has received zero coverage from the Big Three evening newscasts.

There’s been some coverage of these candidates on cable news (CNN has hosted town halls for Johnson and Stein, for example), but the totals pale in comparison to the coverage of Trump and Clinton. And entrepreneurial voters who want to learn more about these candidates can get additional information from alternative news sources, social media and/or the candidates’ own Web sites.

But it’s the day-to-day mass media coverage that validates candidates in the eyes of most voters. During his independent run in 1992, Ross Perot received enough media coverage to be seen as a real competitor to George H. W. Bush and Bill Clinton, and as a result garnered enough public support to win a slot in the presidential debates. On Election Day, Perot won nearly 19 percent of the vote, the best showing by an alternative candidate since ex-President Theodore Roosevelt ran on the Bull Moose ticket in 1912.

Without significant media coverage, most voters probably won’t even consider the alternative candidates of 2016, no matter how dissatisfied they are with the two major party nominees.