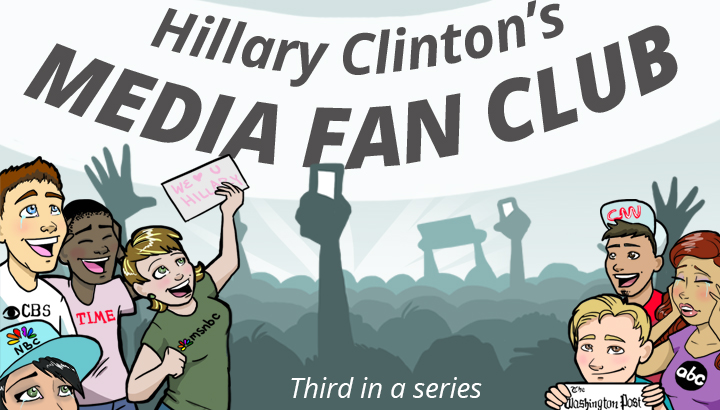 Over the next two weeks, NewsBusters will be documenting the media’s role in fueling Hillary Clinton’s political career by showering her with adoring press coverage while smearing her critics as sinister and sexist. On Wednesday, we kicked off with a collection of media quotes celebrating Clinton as the “successful,” “remarkable,” “fabulous,” “sexy” and “pious” “icon of American womanhood.”

Then on Friday, we showcased quotes from journalists suggesting those who criticized Clinton were sexists upset by her role as a “cultural pioneer.” Today, examples of reporters cheerfully echoing Hillary’s attempt to blame all of her and her husband’s scandals on a “vast right-wing conspiracy,” as opposed to the Clintons’ own impoverished ethics.

Future installments will document journalists’ marveling over Hillary’s “dazzling political mastery,” the many softball interviews she has enjoyed over the years, and the media’s open clamor for her to become the first woman President of the United States. (Links to rest of report added below.)

(Once again, thanks to MRC’s Mike Ciandella for tracking down the available TV clips; the full set of quotes follows the video compilation.) 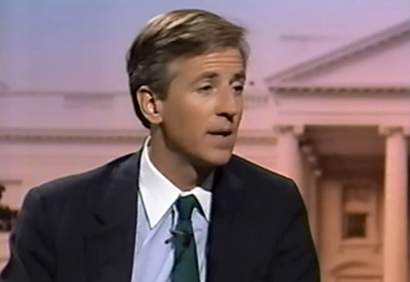 “She [Hillary] is really convinced that the right wing is incredibly well-organized, and there is kind of a hate campaign going on in this country that is, is deeply and well-organized, and it poses a real threat to government and to the Clintons’ personally. And I mean, she may be right.”
— Newsweek’s Evan Thomas on Inside Washington, August 13, 1994.

“So why did it last for four years and cost $40 million? A look at the men and the money behind Ken Starr’s Whitewater investigation indicates that Hillary Clinton may have been right when she said there was a right-wing conspiracy to bring down the President.”
— Co-anchor Diane Dimond on CNBC’s Upfront Tonight, October 23, 1998. 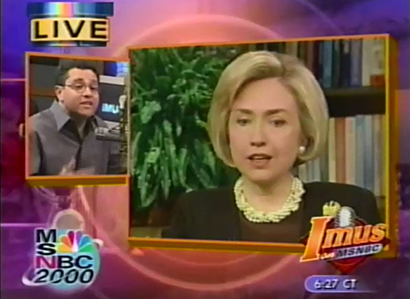 ■ Host Don Imus: “Was the First Lady right when she went on the Today show and described this attempt to get her husband as a ‘vast right-wing conspiracy’? Was there any kind of conspiracy?”
ABC’s Jeffrey Toobin: “I think she was more right than wrong....And if you look at how I think the legal system was manipulated by Clinton’s enemies, you know, practically from day one of his presidency, yes, I think it’s fair to say there was a conspiracy to try to force Clinton out of office, but one in which the President, you know, gave his enemies tremendous ammunition.”
— January 11, 2000 appearance on Imus in the Morning on MSNBC by Toobin, author of A Vast Conspiracy: The Real Story of the Sex Scandal that Nearly Brought Down a President.

■ “A supportive spouse, surprisingly accepting colleagues, and a mandate to legislate. For Sen. Clinton, life is almost perfect. If only they weren’t still out to get her.”
— Subhead of Washington Post reporter John Harris’s profile, “The Liberation of Hillary,” the cover story for the Post’s Sunday magazine, January 27, 2002. “They” referred to Clinton’s conservative critics.

■ “It’s her resilience and capacity to survive and thrive against all comers that partly fuels the haters’ fury....Installed in Washington, Hillary morphed into a comic-book villain for her detractors — a man-eating feminist, they claimed, who allegedly threw lamps at her husband, communed psychically with Eleanor Roosevelt and lit a White House Christmas tree adorned with sex toys. The narrative of depravity — a tissue of inventions by conservatives — was often hard to follow....The anti-Hillary industry has never managed to bring down Hillary herself — in fact, the more they have attacked, the higher she has risen.”
— Newsweek’s Jonathan Darman and Mark Hosenball in “The New War on Hillary,” June 18, 2007 issue. 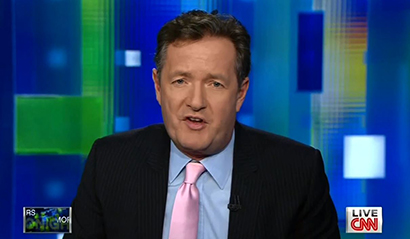 ■ “I’m getting a little bit weary, I’ll be honest with you, with the relentless attacks first on Susan Rice and now on Hillary Clinton. There’s a whisper of misogyny to it.”
— CNN’s Piers Morgan discussing Benghazi with ex-State Department spokesman P. J. Crowley on Piers Morgan Tonight, January 23, 2013.

■ “First, she was called the bra-burning feminist with a degree from Wellesley. Then, she was the aggressively political spouse from Arkansas who plotted behind closed doors. Today, she is the millionaire elitist who socializes in New York City and the Hamptons. Few modern political figures inspire the animus that Hillary Rodham Clinton generates, and the cottage industry that opposes her never really goes out of business. But as Mrs. Clinton prepares for a likely presidential campaign in 2016, the sprawling network is evolving to attack her on new grounds.”
— New York Times reporter Amy Chozick, January 24, 2015. 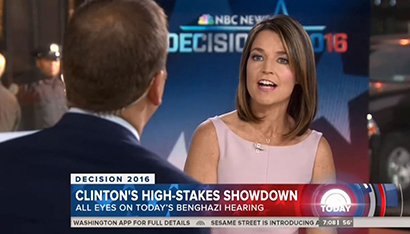 ■ “Hillary Clinton has done a fairly good job of trying to disqualify this [Benghazi] panel. Some would argue they disqualified themselves.”
— Co-host Savannah Guthrie on NBC’s Today, October 22, 2015.

■ “She did great, because she was up against a group of demagogues. You have to go back to Joe McCarthy to see this kind of demagoguery in a congressional hearing, and what they did is they gave her a platform to show what kind of President of the United States she would be.”
— Former Washington Post reporter Carl Bernstein talking about the Benghazi hearings on CNN Tonight, October 22, 2015.