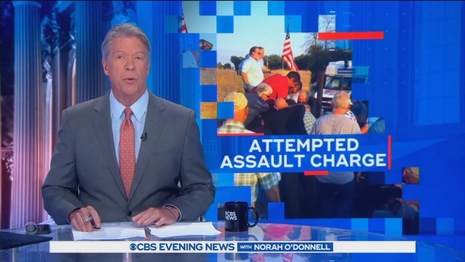 After minimal coverage Friday morning of the violent assassination attempt of New York Republican Congressman Lee Zeldin as he campaigned for governor, ABC’s World News Tonight and CBS Evening News downplayed the attack with the latter calling the weapon just a keychain. And NBC Nightly News ignored the attack altogether to focus on lost luggage at airports.

During Good Morning America, ABC gave the attack 58 seconds. Seemingly not wanting to be outdone, World News Tonight decided to cut their coverage by more than half, with fill-in anchor Whit Johnson giving it just 24 seconds.

Showing grainy images of the attack, Johnson said the attack was a “dangerous moment” but never showed the weapon which, in other clearer images available online revealed it was just inches from Zeldin’s throat.

“Zeldin wasn't hurt. Investigators tell ABC News the suspect is a 43-year-old Army vet who receives treatment for alcohol abuse and anxiety,” Johnson added. He also noted the attempted assassin was released from jail but didn’t have anything critical to share about that.

Over on CBS Evening News, they gave the assassination attempt just 16 seconds. Apparently, the 29 seconds CBS Mornings gave it was too much.

In the news brief delivered by chief Washington correspondent Major Garrett, who was filling in for anchor Norah O’Donnell, the weapon used wasn’t too much to worry about because it was just “a sharp self-defense keychain.”

Garrett also didn’t provide any critical take on how “a man charged with attempting to assault New York Republican gubernatorial candidate Lee Zeldin has been released without bail.”

The largest drop-off in coverage was from NBC News. Their flagship evening newscast NBC Nightly News dropped the story entirely after the Today show gave it a respectable two minutes and five seconds in the morning. Instead, they gave that time to a segment on lost airport luggage. The luggage report lasted almost two minutes (1: 54).

This, combined with how quickly the assassination attempt against U.S. Supreme Court Justice Brett Kavanaugh was dropped, makes it look as though the networks don’t care about the lives of conservatives.

This disregard for the life of a conservative congressman was made possible because of lucrative sponsorships from Prevagen on ABC and Ensure on CBS. Their contact information is linked.

The transcripts are below:

WHIT JOHNSON: Now to the dangerous moment for the Republican candidate for governor of New York. Congressman Lee Zeldin speaking to a small group when a man climbed up on stage and attacked him. Zeldin wasn't hurt. Investigators tell ABC News the suspect is a 43-year-old Army vet who receives treatment for alcohol abuse and anxiety. The suspect was arrested and charged but released from jail less than 24 hours after the attack.

MAJOR GARRETT: Tonight, a man charged with attempting to assault New York Republican gubernatorial candidate Lee Zeldin has been released without bail. The man armed with a sharp self-defense keychain was wrestled to the ground at a campaign event Thursday. Congressman Zeldin was not hurt.