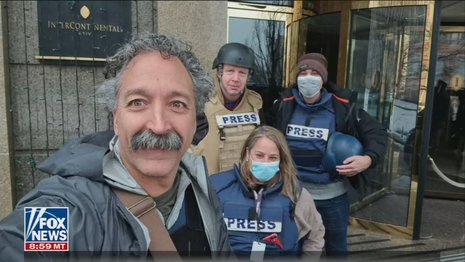 On Tuesday, we got more terrible details about the fate of the Fox News crew that came under fire by Russian forces as they were newsgathering outside Kyiv on Monday where one was left hospitalized and at least were two killed, including cameraman Pierre Zakrzewski and local reporter/producer Oleksandra Kuvshynova. Of course, this meant that some of the classless ghouls in the liberal media were eager to crawl out of their holes and use those deaths to strut around and attempt to score political points.

The first to sprint to prove how low they could go was New Yorker staff writer and CNN global affairs analyst, Susan Glasser. “What a tragedy. A cameraman died covering the war for a TV network that airs a pro-Putin propagandist as its top-rated primetime host,” she gloated in a tweet.

A few minutes later, she slithered back to remark that Zakrzewski’s dedication to journalism “[m]akes the years of lies and propaganda so much harder to take—there are truly deadly consequences.”

So grateful for the heroic work that Pierre and all the journalists, Ukrainian and foreign, have been doing risking their lives to show us the horror of this war. Makes the years of lies and propaganda so much harder to take—there are truly deadly consequences.

Seeing Glasser’s ghoulishness, Washington Post columnist Margaret Sullivan decided she needed to get on it too with this now-deleted tweet (no explanation for the deletion was given):

In yesterday's attack near Kyiv, we have lost a beautiful brave woman - Oleksandra Kuvshinova - Sasha. She loved music and she was funny and kind. she was 24 years old. She worked with our team for the past month and did a brilliant job.
May her memory be a blessing pic.twitter.com/QGzqV3Fy5D

But now that we’ve gotten those unpleasant folks out of the way, let’s look at those who knew when to come together.

Over on CNN, in contrast to Glasser, media reporters Brian Stelter and Oliver Darcy published a write-up on the tragic story and did not try to take shots at their rival network. “Fox News had just recognized Zakrzewski in December as one of the network's ‘unsung heroes.’ He was described at the time as a journalist who ‘risks his life in war zones to get the story for Fox News,’” they wrote.

There are no words. I had the great privilege of working with Pierre and the even greater privilege of calling him a friend. An extraordinary spirit and tremendous talent and one of the kindest, most gracious colleagues on the road. Absolutely heartbreaking. https://t.co/KmScUCcAwd

This is how I want to remember Pierre Zakrzewski.

He was found dead alongside Ukrainian journalist, Oleksandra Kuvshynova. RIP

And we’ll leave you with some Fox News journalists remembering their colleague and friend.

A happier memory of Pierre Zakrzewski - he had us try the largest crab I’ve ever seen when we were in Singapore. He was JAZZED to try it. He was funny, kind and always up for an adventure. Rest peacefully friend. ❤️ pic.twitter.com/6JIf3yA1YA

Dear colleagues,
It is with great sadness and a heavy heart that we share the news this morning regarding our beloved cameraman Pierre Zakrzewski. Pierre was killed in Horenka, outside of Kyiv, Ukraine. Pierre was with Benjamin Hall yesterday newsgathering when hit. MORE pic.twitter.com/Elr7deWR89

I don’t know what to say. Pierre was as good as they come. Selfless. Brave. Passionate. I’m so sorry this happened to you. pic.twitter.com/IvxlPWGDAl