The Second Half: CBS/NBC Give Jan. 6 Over 80% Evening News Airtime 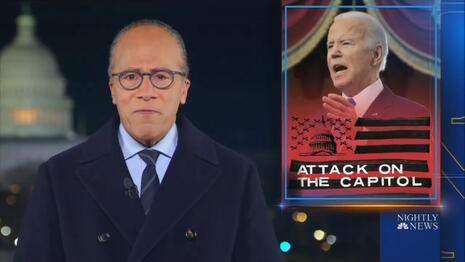 As NewsBusters documented Thursday morning, the anniversary of January 6 was their Super Bowl as the broadcast networks (ABC, CBS, and NBC) spent nearly 90-combined-minutes obsessing over the riot at the Capitol like their political careers depended on it. That infatuation cared over through half-time (to stick with the football nomenclature) to their evening newscasts where CBS and NBC each gave it over 80 percent of their total airtime.

NBC Nightly News was arguably the most political invested given their ties to MSNBC. Of their total airtime dedicated to delivering the news (18 minutes and 33 seconds) they spent 15 minutes and 27 seconds, or 83.3% on January 6 and stories related to it.

Not included in these time tallies are the opening teases, pre-commercial teases, teases of upcoming network content/reports, and commercials.

Of course, as he usually is, NBC anchor Lester Holt was grandiose when speaking about the day’s events. “We begin tonight in the virtual shadow of the U.S. Capital, a symbol of democracy, and for the past year, a symbol of how fragile that democracy is,” he declared at the top of the show. “Tonight, a year on from the attack that stunned the world the day January 6 evokes anger and sadness as well as denial and rationalization.”

He also conducted a sit-down interview with Speaker Nancy Pelosi (D-NY), giving her the floor to suggest a bomb was dropped on Congress and teed her up to lecture Republicans about what they used to stand for.

WELKER: The Vice President comparing January 6th to infamous attacks on the U.S. that killed thousands, including Pearl Harbor and 9/11. 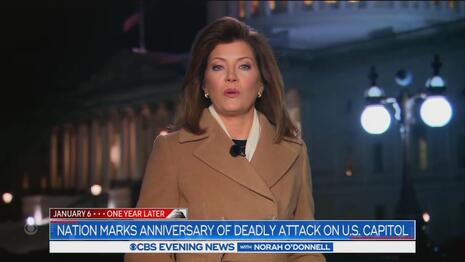 Over on CBS Evening News, they came in second with 16 minutes and 58 seconds of news airtime, with 13 minutes and 43 seconds of that dedicated to the anniversary. This breaks down to nearly 81% (80.8) of their airtime going to something few rational people outside the D.C.-New York bubble care about.

Adding: “…but it was more than the Capitol that was attacked – democracy itself was under assault but, in the end, democracy prevailed.” The network also pushed the false, Democratic Party narrative that voting rights were in peril.

As with NBC, CBS’s other covered contented included the COVID pandemic and more winter weather hitting the Washington, D.C. area, because they’re forever obsessed with themselves.

Finally, we have ABC’s World News Tonight with a tad more modest majority (56.6%) of their news content going to celebrate their new religious holiday for the church of government. Their total airtime for news was the least at 15 minutes, 58 seconds. Of that, 9 minutes and 12 seconds went to January 6.

“It has been one year since the attack on the Capitol. And today, President Biden addressing the American people and condemning former President Trump,” lauded ABC anchor David Muir.

This over-the-top, politically motivated coverage was made possible because of lucrative sponsorships from Vicks on ABC, Prevagen on CBS, and Liberty Mutual on NBC. Their contact information is linked.