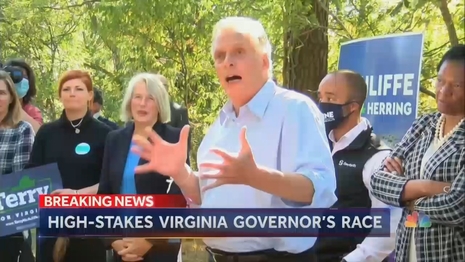 As NewsBusters has been reporting in recent days, the broadcast networks were going all-in on trying to keep Democrat Terry McAuliffe’s dwindling chances to win the gubernatorial in Virginia alive. But while they take McAuliffe’s side against Republican Glenn Youngkin, they were leaving him completely unvetted. Luckily we had The Daily Wire to investigate the Democrat’s ties to a law firm that fights against rape victims and with which he has taken a paycheck as recently as this election year.

Instead of reporting on McAuliffe’s connection to this firm during Tuesday’s NBC Nightly News, chief White House correspondent Kristen Welker flew the campaign’s banner. “But Youngkin has gained ground by running attack ads highlighting this controversial McAuliffe comment, which McAuliffe insists was taken out of context,” she proclaimed, playing a soundbite of his contempt for parents having a say in education.

If Welker was concerned that McAuliffe’s words were “taken out of context,” she could have looked to her colleague and NBC political director, Chuck Todd. He was the moderator for the debate where McAuliffe made the comment; he was even in the shot she used in the report.

Meanwhile, ABC’s World News Tonight was busy gushing about a guy who found and bought his mother’s old '71 Cutlass Supreme. And CBS Evening News was busy hyping a Japanese princess that rejected a dowry and lost her title.

So, it was up to Daily Wire investigative reporter Luke Rosiak to shed light on the story.

“A law firm that employed Virginia gubernatorial candidate Terry McAuliffe has made a cottage industry out of aggressively fighting victims of alleged sexual abuse in schools, being paid huge sums by school administrators whom the girls say ignored their accusations,” he reported

And according to his findings, they would go against young girls who were the victims of truly heinous acts:

In one case, the Hunton Andrews Kurth law firm, where McAuliffe served as a senior adviser from 2019 until recently, is battling a young woman who says that she was repeatedly raped on her Fairfax County middle school campus as a 12-year old and that she was slashed with a knife, burned with a lighter, and anally penetrated.

They would even try to get victims’ identities exposes even when they were facing death threats from their attackers.

“The law firm and McAuliffe’s campaign refused to comment on whether the law firm still employs McAuliffe by the deadline but McAuliffe reported income apparently linked to the firm in 2021, after announcing his run for governor of Virginia on December 8, 2020,” Rosiak reported.

The firm was also casing a case to the Supreme Court where they hoped to upend protections for young victims “while protecting administrators who failed to act.”

The networks also omitted how, during his first run as governor, McAuliffe blocked “a bipartisan bill that would have required parents to be notified of explicit material and assigned reading,” as reported by Alexandria Hoff on Fox News Channel’s Special Report, on Tuesday.

By ignoring McAuliffe’s ties to this firm, the networks were flaunting just how politically driven they were. Because if he was a Republican, they would be all over it. But they want to keep the Virginia governor's mansion in Democratic hands.

This blackout of Terry McAuliffe’s ties to a law firm fighting against rape victims was made possible because of lucrative sponsorships from Ring on ABC, Salonpas on CBS, and Consumer Cellular on NBC. Their contact information is linked so you can tell them about the biased news they fund.

LESTER HOLT: With Democrats still divided over his spending plans, President Biden is campaigning in Virginia tonight for the Democratic candidate for governor. That dead-heat race is being viewed as a referendum on the President as well. Kristen Welker went to Virginia for us.

KRISTEN WELKER: Tonight, a critical test for President Biden campaigning next door in Virginia. But with Mr. Biden's poll numbers dropping, can he boost support for Democrat Terry McAuliffe, a former governor?

TERRY MCAULIFFE: This election is about the next chapter of Virginia.

WELKER: The President is the latest top Democrat to barnstorm in the state.

WELKER: Still, despite the high-powered help, McAuliffe is locked in a tight race against Republican Glenn Youngkin in a state that's recently gone blue.

GLENN YOUNGKIN: We've got people flocking to our campaign. [Transition] People walk up to me every minute and say, Glenn, I'm a lifelong Democrat. I'm voting for you.

WELKER: The Republican businessman walking a fine line when it comes to the marquee name in his party, former President Trump. Mr. Trump endorsed Youngkin but has not campaigned with him. McAuliffe is trying to link Youngkin to the former President and it's working on some early voters.

Why did you vote for Terry McAuliffe?

UNIDENTIFIED MAN: Because I'm supporting the Democrat this year. I didn't even look at the Republican candidate because of the last four years honestly.

WELKER: But Youngkin has gained ground by running attack ads highlighting this controversial McAuliffe comment, which McAuliffe insists was taken out of context.

MCAULIFFE: I don't think parents should be telling schools what they should teach.

WELKER: A strategy that could be resonating in the all-important suburbs, which Mr. Trump lost in 2020.

UNIDENTIFIED WOMAN: I'm going to vote for Youngkin. [Transition] I think, like, you know, with these school board meetings and everything like that, I just like -- everything's in chaos.

WELKER: And tonight, there are still voters who are undecided, including Democrat Christina Davis. Do you know who you're going to vote for for Virginia governor?

CHRISTINA DAVIS: I have no idea. I'm still up and down and seeing what people are really going to do and if they're true to their word.