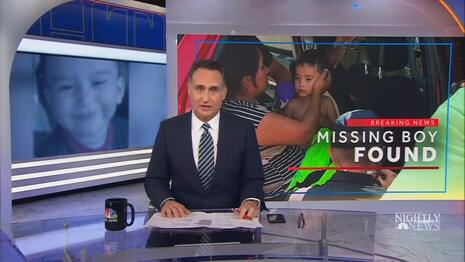 Just last month, on September 23, both CNN Prime Time host Chris “Fredo” Cuomo and NBC Nightly News lectured their viewers about how the media and the public needed to care more about missing minorities and help try to find them. But both missed their chance to do just that last week when three-year-old Latino boy Christopher Ramirez went missing in Grime County, Texas. Thankfully, his community came out in force and he was found safe after a four-day search, and NBC didn't mention it until after that point (pictured here).

“Let's see if the attention on #gabbypetito and the concern about neglect of others who are missing can generate sustained interest in finding folks. Another family is desperate. Will you take up the cause,” Fredo chided in September, asking people to be on the lookout for Native American Reatha May Finkbonner.

And in a response to a commenter who questioned if he would stick to what he was preaching, Cuomo shot back: “Will you be as interested? Let's watch tonight and see. There are other families desperate for answers. We hate with gusto on here...can we help as well?”

Fredo’s argument at the time was essentially the media wasn’t going to cover missing minorities because the public didn’t seem to care about them as much as they did for white woman Gabby Patito. It was a bizarre argument because CNN seemed to be doing everything to drive down their ratings anyway and not chasing them as Cuomo suggested.

In another tweet, Cuomo scoffed, saying, “Talking about the problem is good. Doing something about it is better. Who in media will step up?” It clearly wasn’t going to be him as he chose to focus on the search for Patito’s runaway former boyfriend Brian Laundrie and not little Ramirez.

There was a similar tone-deafness on NBC where anchor Lester “fairness is overrated” Holt lamented how “The intense and heavily followed effort to find Gabby Petito invites a sharp contrast. The families of so many of those missing in this country, many people of color feel forgotten.”

At the time, NBC correspondent Antonia Hylton suggested that “As Gabby Petito's case grips the nation, families of color with missing loved ones remind the nation they're hurting too.” Adding: “In 2020, more than 500,000 people were reported missing. Nearly 40 percent of them, people of color.”

But neither NBC Nightly News nor the Today show mentioned the missing little boy, that was until he was found on Saturday (pictured above). “There is some really good news in the search for a missing boy in Texas. The three-year-old who went missing in the woods has been found safe after a four-day search,” announced Nightly News anchor Jose Diaz Balart.

And contrary to their initial assertion that white people just didn’t care about missing minorities, their report included excited Grimes County Sheriff Don Sowell. “We were running on prayers, four-wheel drive, and overdrive, to be honest with you. Because we had nothing else,” he told the press. “In my 53 years of combined law enforcement, I've never seen one this detailed.”

In an ABC World News Tonight report on Monday, they noted that Sowell had made Ramirez a junior duty. And the lander who found it, who also happened to be white, went out to search for him by himself.

The American people are obviously better than the media would dare give them credit for on this topic, and yet the media don’t even live up to the standards they set for themselves.