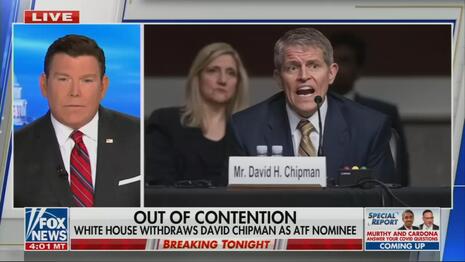 NewsBusters asked and the broadcast networks answered! On Thursday, the Biden administration was forced to pull the nomination of radical gun control activist David Chipman to head the Bureau of Alcohol, Tobacco, Firearms and Explosives after evidence surfaced that he had targeted black agents with false negative reviews during promotions while at the bureau years ago. As expected, ABC, CBS, and NBC refused to cover the latest embarrassing defeat for President Biden.

In addition to praising Biden and using violent terms for what he would do to the unvaccinated, each of them wasted valuable time focusing on the asinine and the partisan. ABC’s World News Tonight and NBC Nightly News bizarrely put a spotlight on a military parade in North Korea. ABC was fixed on how thin Kim Jong-un had gotten while NBC touted the soldiers marching in hazmat suits to symbolize their fight against COVID-19.

Meanwhile, CBS (as well as the others) hyped the Justice Department acting as a cudgel for the administration by suing the State of Texas over their pro-life law.

Chipman’s nomination was shot down due the diligent reporting of Stephen Gutowski, the founder of The Reload, who broke the story in late July that the wannabe ATF boss had a racial complaint filed against him during his previous 25 years working at the bureau.

“Multiple ATF sources back up the existence of a complaint alleging President Biden’s nominee to lead ATF, David Chipman, made racist comments during his previous stint at the agency,” Gutowski wrote.

Adding: “The agents, who have decades of experience at the agency, told The Reload they heard the accusation that Chipman denigrated black ATF agents up for promotion. The officials said they heard about Chipman’s alleged comments before they were referenced in a recent lawsuit seeking the release of the complaint.”

From there, things snowballed in August when another black former ATF agent accused Chipman of similar racial misconduct (again broke by The Reload) and Iowa Senator Chuck Grassley (R) demanded the release of a whistleblower report regarding Chipman’s conduct.

“In a letter, Grassley (R., Iowa) told the inspector general his office was concerned about a recent story published in The Reload where the agent accused Chipman of being motivated by a racial bias. The senator said his office had received additional whistleblower reports that back up the allegation,” Gutowski reported.

Less than a month later, The Reload claimed the scalp (click “expand”):

David Chipman will not be the director of the ATF.

Multiple sources have told Politico, The Washington Post, and CNN the White House plans to withdraw his nomination after failing to garner 50 votes in the Senate. Chipman was unable to secure support from even the Democratic caucus after a contentious confirmation hearing and a series of Reload stories on allegations of racism on his part coming from former ATF agents. The Reload stories led to calls from Republicans for new hearings and a whistleblower report being filed with the ranking member of the Senate Judiciary Committee.

Despite the fact that The Reload’s reporting was the driving factor behind the White House’s decision, the liberal media was trying to make it about Chipman’s work for radical gun control organizations.

“Chipman worked at the ATF for 25 years before retiring in 2012. He then advised groups that advocate for gun control, like Everytown, and the Giffords Law Center,” reported William Brangham on PBS NewsHour.

Adding: “And when it and when it came to confirming Chipman, those affiliations were a problem for all of the Republicans in the Senate. Even some moderate Democrats expressed reservations.”

Gutowski has made an appearance on the NewsBusters Podcast to discuss the liberal media’s ignorance of guns, gun owners, and gun facts. You can check that out here.

The network omission of this Biden defeat was made possible because of lucrative sponsorships from Fisher Investments on ABC, Cadillac on CBS, and Ford Motor Company on NBC. Their contact information is linked so you can tell them about the biased news they fund.