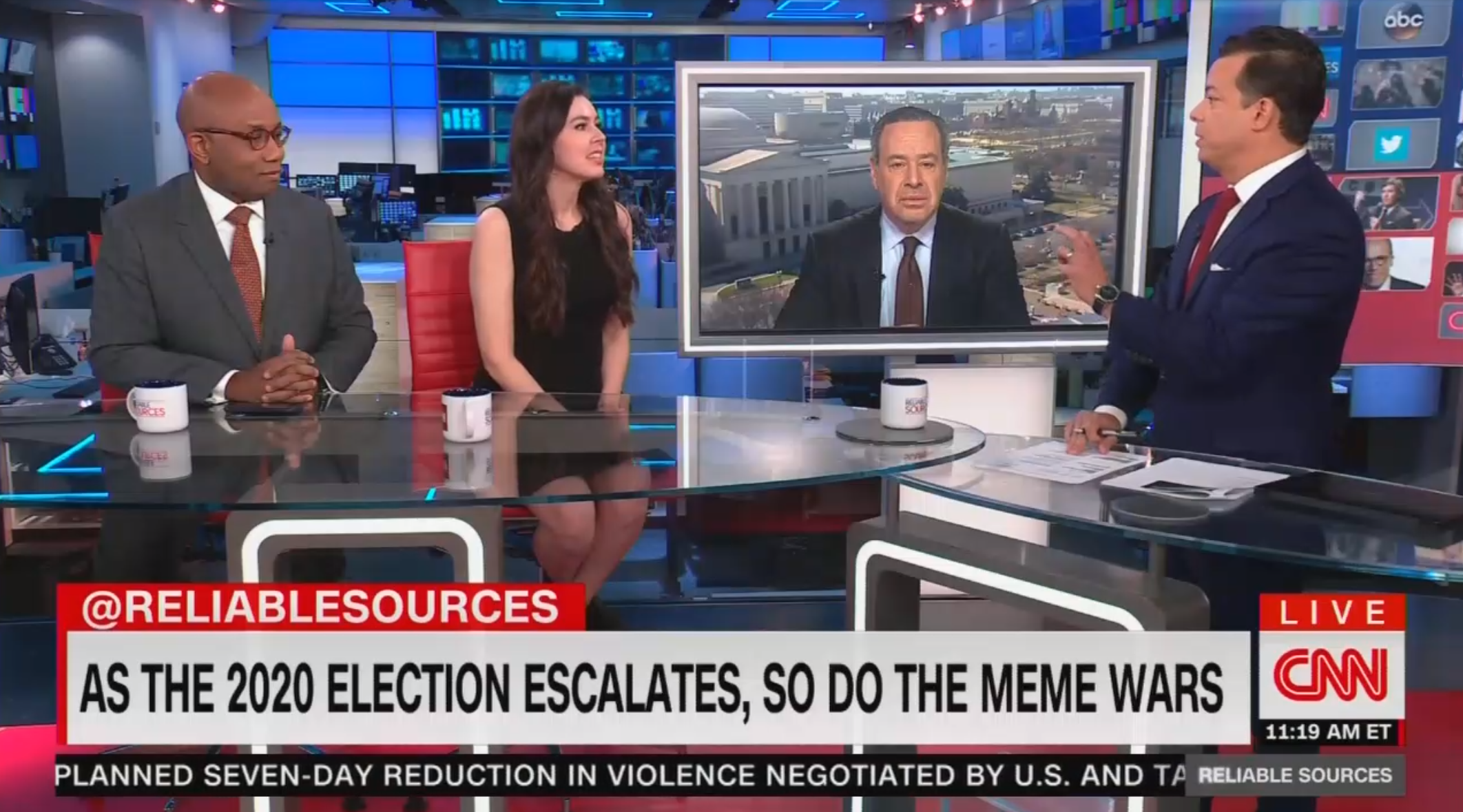 Though the segment blew up on Twitter because The Atlantic’s David Frum described President Trump as so “physically capable” that he couldn’t “pick up a ball,” the arguably more ridiculous part of that Sunday’s so-called “Reliable Sources” segment was when fill-in host John Avlon led the panel in a mini-freak-out about memes. Together, they claimed memes were responsible for voter suppression and were all part of a Russia election interference scheme.

In praising his New York Times guest, Taylor Lorenz for her work writing about the “Meme Wars,” Avlon made his outlandish claim. “And this, for folks who don’t know, is the new, new thing that's going to be really driving a lot of narratives and conversation and voter suppression efforts to some extent in this upcoming election,” he proclaimed without evidence.

After having to explain what a meme was to the audience, Lorenz moved on the denouncing them a particularly subversive form of evil spawned by Russia. “Well, memes use humor to introduce new ideas and often these ideas can be very insidious and problematic. Memes in 2016 were used throughout Facebook to spread misinformation. So, you know, basically Russian interference,” she declared.

This wasn’t the first time CNN had lost their collective minds over memes. In July of 2017, Reliable Sources host Brian Stelter decried Trump as “dangerous” and “fascist” for sharing a meme of him at a WWE event beating up on a guy with the CNN logo as a face. The undertone of the segment was that the President was threatening their lives via memes.

In response to that meme, CNN sent investigative reporter Andrew Kaczynski to hunt down the creator and blackmail him with the threat of revealing his identity if he ever made a mean meme about CNN ever again.

At the time, Avlon defended the blackmail tactic and denounced those who dared to criticize CNN. “I think what’s troubling and fascinating is the way that-- what Kirsten just explained, which is an emphasis language added by an editor at the request of legal all of a sudden got made and turned into a fictitious vision of playing the victim, that is amplified, moral justification, saying that it was a 15-year-old boy,” he said.

He went on to add: “And it has to be predicated on a fundamental lie to distract from the original issue, which is the President of the United States tweeting out a meme that shows violence against a news outlet (…) That’s something new, that’s something dangerous, but it’s something we need to be very firm about not get distracted by. Because the whole purpose is to distract us from the real issue.”

On Sunday, Avlon moved on to Frum to get him to speak about how memes “increase cynicism and apathy” in the pursuit to “muddy the waters.” From there, Frum spouted off about Trump ridiculing Hillary Clinton for her poor heal during the 2016 election. “But, he was able to put into the minds of tens of millions of people, the idea that Hillary Clinton, who is a very vigorous woman in good health, was somehow too sick to be president,” he whined.

Of course, he ignored the fact that the ridicule occurred when Clinton was hiding a pneumonia diagnosis, which was exposed by a video of her needing to be helped to a car after leaving a 9/11 memorial event early.

JOHN AVLON: Taylor, want to shift to you because you've had a series of fascinating columns and articles not at The New York Times about the meme wars. And this, for folks who don’t know, is the new, new thing that's going to be really driving a lot of narratives and conversation and voter suppression efforts to some extent in this upcoming election. For folks who don't know, explain to them what a meme is.

TAYLOR LORENZ: Sure. A meme is essentially just a short piece of content, you know, aimed at communicating a simple message. So, you can make -- it could be a short video, it’s often a short piece of text and an image, sort of like a political cartoon.

AVLON: And is— How is it weaponized to achieve a political end and what are those political ends that we've seen in recent months?

LORENZ: Well, memes use humor to introduce new ideas and often these ideas can be very insidious and problematic. Memes in 2016 were used throughout Facebook to spread misinformation. So, you know, basically Russian interference. Memes are also usually hyper-partisan. So, what gets shared the most on Facebook and Instagram are these, you know, very, very far-left very far-right memes promoting this information.

AVLON: David, one of the things that's so interesting and, I think, sinister about this stuff is that it really does have the impact of trying to increase cynicism and apathy, that that's part of its goal, to sort of muddy the waters. Tell us a little bit about your insights into that?

DAVID FRUM: Well, it has an effect also on people's affirmative ideas. One of the things that Donald Trump tried to spread in 2016 was the idea that Hillary Clinton was somehow physically incapable of managing the presidency.

I mean, it’s audacious. Donald Trump was the oldest president ever. One of the fattest presidents ever. The least physically capable president since Franklin Delano Roosevelt was in a wheelchair. I mean, he can't pick up a ball, never mind throw it.

But, he was able to put into the minds of tens of millions of people, the idea that Hillary Clinton, who is a very vigorous woman in good health, was somehow too sick to be president.

AVLON: Right. One of many examples, and we've certainly seen a lot around impeachment as well. And this, folks, is just the beginning.