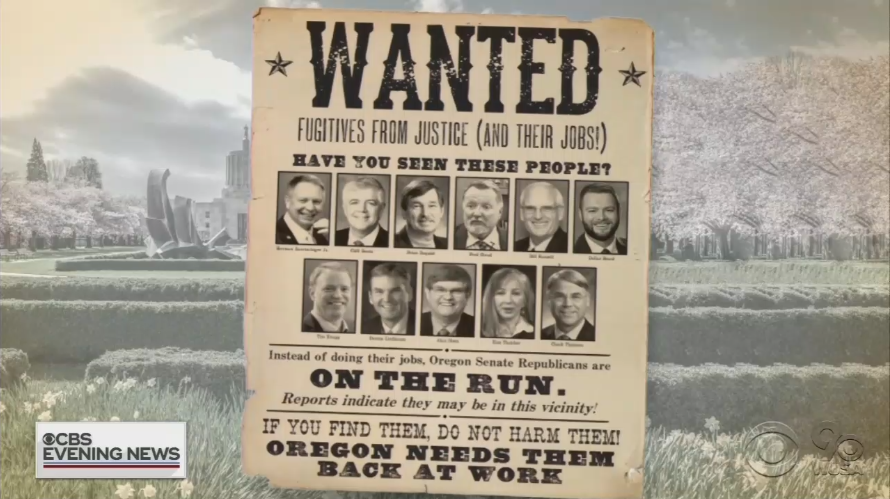 The CBS Evening News targeted GOP state Senators in Oregon for ridicule and scorn Tuesday night, after some went into hiding and others fled the state in order to block a vote on a controversial climate change bill. In a video call with one Senator, CBS correspondent Carter Evan wondered: “What are you afraid of? Are you afraid of democracy?”

But back in 2011, CBS threw its full support behind Wisconsin Democrats who used the same tactic to protect public sector unions from then-Republican Governor Scott Walker’s budget cuts.

Evans boasted that “state Democrats even made a wanted poster, harkening the days of the wild west.” He even shared a picture of it that suggested the Republican Senators were “fugitives from justice” that were “on the run.” “Reports indicate they may be in this vicinity,” the poster warned Oregonians.

Meanwhile, then-CBS correspondent Cynthia Bowers cheered on the Wisconsin Democrats by suggesting they had “become heroes to protesters.” “Now comes word, albeit, from a Republican, some may be ready to come home and concede," she lamented in early March of that year.

But when Democrats deployed the tactic, then-CBS Early Show co-host Erica Hill touted it as a way for those Wisconsin Democrats to “work together” with “more moderate Republicans” to “come to some sort of agreement that could then put pressure on the [Republican] Governor.”

In a video call with Republican State Senator Tim Knopp, Evans seemed to accuse the Senator of being “afraid of democracy”:

EVANS: Some have now fled the state. We video-conferenced with Republican Senator Tim Knopp, now in hiding. [TO KNOPP] We're at the state capitol right now. Where are you?

SEN. TIM KNOPP: I am in Idaho at a cabin by a lake.

“Actually, this is democracy. This is defending our constituents,” the Republican shot back.

While Evans found joy in Democrats putting a fictional bounty on the heads of Republicans, his network actually ignored the flood of death threats sent to those Wisconsin Republicans in 2011. Apparently, CBS believes only liberal causes were worth supporting.

MAURICE DUBOIS: Republican state senators in Oregon have not shown up for work since last Thursday. That’ve gone into hiding, some of them out of state to, block Democrats from voting on a climate bill. Carter Evans is in Salem tonight.

CARTER EVANS: As lively as Oregon's state capital appears on the outside, it is dead silent inside the state senate chamber.

UNIDENTIFIED WOMAN: That's what you're paid for. So they should be back to work and doing their job.

EVANS: 11 Republican state senators walked out six days ago. State Democrats even made a wanted poster, harkening the days of the wild west. But one outlaw senator took it to the extreme, telling a Portland television station --

SEN. BRIAN BOQUIST: Send bachelors and come heavily armed. I'm not going to be a political prisoner in the state of Oregon.

EVANS: At the heart of the political standoff is a bill that would drastically reduce carbon emissions. The Democrat-supported law would raise a variety of taxes. Democrats hold 18 Senate seats, but they need 20 senators in order to conduct business.

GOV. KATE BROWN: This is no longer about climate change. This is about ensuring that the legislative branch can operate.

EVANS: So Oregon Governor Kate Brown said she had no choice but to send out a posse. [TO BROWN] You sent the State Police after them.

BROWN: Yes, the State Police are still looking for members within the state of Oregon.

EVANS: Some have now fled the state. We video-conferenced with Republican Senator Tim Knopp, now in hiding. [TO KNOPP] We're at the state capitol right now. Where are you?

SEN. TIM KNOPP: I am in Idaho at a cabin by a lake.

KNOPP: Actually, this is democracy. This is defending our constituents.

BROWN: Oregonians should be furious. It's unacceptable. In Oregon, this is not how we solve problems.

EVANS: With just five days left in the legislative session, the Senate President now says there simply aren't enough votes to pass this climate bill, so he's urging Senate Republicans to return home, but they seem skeptical and don't appear ready to come out of hiding just yet. Maurice.