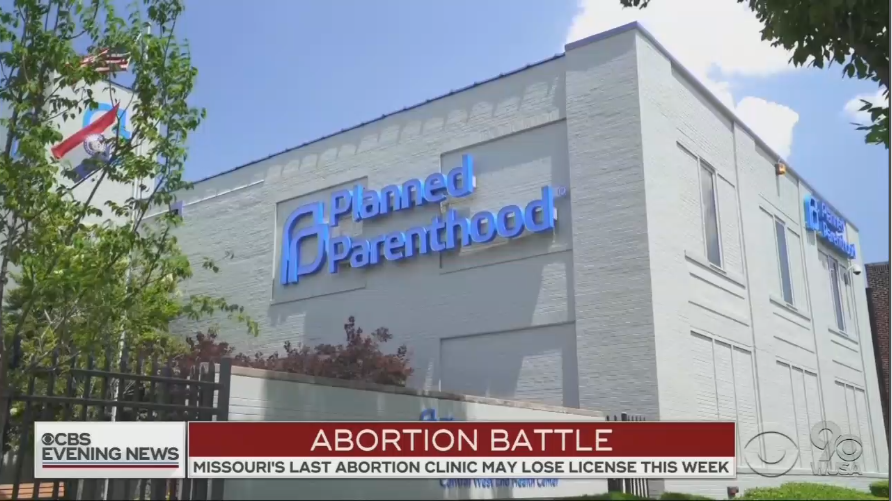 As the last Planned Parenthood clinic in Missouri battled the state to renew its license, the liberal broadcast networks rushed to the defense of the organization during their flagship Tuesday evening newscasts. While they decried the momentum of pro-life legislation, then neglected to answer the “why” portion of why the license was in jeopardy.

“Missouri could become the first state in the nation with no abortion clinic. This Planned Parenthood facility in St. Louis going to court to stay open beyond Friday, unable to reach an agreement with Missouri's health department to renew its license,” correspondent Anne Thompson announced in a repulsed tone during NBC Nightly News.

Thompson bemoaned how a combination of “no clinic and a new law” banning abortion after eight weeks would leave women with no options to have their babies killed. “Last week, a federal judge blocked a similar Mississippi law, finding it, quote, ‘threatens immediate harm to women's rights,’” Thomas touted.

CBS correspondent Janet Shamlian parroted some of the same talking points during her report on the CBS Evening News. She added: “It would mark the first time since the 1973 Roe v. Wade decision that a state would be without an abortion clinic.”

Along with highlighting a soundbite of Planned Parenthood President Dr. Leana Wen proclaiming that “banning abortion is not going to stop abortion, but it will stop safe, legal abortion,” Shamlian lashed out at a Louisiana state Democrat who supported their pro-life bill: “Where is the consideration for the woman? What about rape? What about cases of incest? There's no accommodation for that.”

“Actually, our belief is that if someone commits a sexual assault, the unborn baby has committed no crime,” he shot back.

What all these journalists were omitting from their reports was why Missouri wasn’t renewing their license. The only one to come close to addressing it was David Muir, anchor ABC’s World News Tonight. “Planned Parenthood, which operates the clinic, reports the state says it is investigating, quote, ‘a large number of possible deficiencies,’” he said in a news brief.

A report by NPR, out Tuesday, went into better detail that the broadcast networks, while still decrying the loss:

Planned Parenthood officials say they've been unable to reach an agreement with officials at the Missouri Department of Health and Senior Services, who want to require several doctors who perform abortions at the health center to submit to questioning as a condition of renewing the license.

“Planned Parenthood says state officials have indicated the questioning could lead to criminal proceedings or board review for those physicians,” NPR continued.

So, the clinic was on the brink of shutting down because Planned Parenthoods was refusing to allow doctors to answer questions from the state, which could reveal practices serious enough to warrant criminal charges (provided there was evidence). No wonder the broadcast networks blacked that out of their reports.

DAVID MUIR: There are new developments tonight in the widening debate over abortion in this country. Missouri's only abortion clinic could close on Friday because the state is threatening not to renew its license. Planned Parenthood, which operates the clinic, reports the state says it is investigating, quote, “a large number of possible deficiencies.” It comes days after Missouri's Governor signed a new law that bans abortions after eight weeks with no exceptions.

And tonight, the Supreme Court has issued a two-part ruling on Indiana's anti-abortion law, upholding its requirement that fetal remains be buried or cremated, but keeping in place a lower court ruling that blocked the law's ban on abortion motivated by race, sex, or disability of the fetus.

MARGARET BRENNAN: The Supreme Court today issued a compromised ruling on an Indiana abortion law upholding some portions while refusing to reinstate others. Now, this suggests that the justices are not eager to take up a challenge to Roe v. Wade. At the same time, several states are attempting to enact new restrictions on abortion, and as first reported on CBSN, Missouri may soon have no clinics providing abortions. Here's Janet Shamlian.

JANET SHAMLIAN: The only abortion clinic in Missouri may be forced to stop performing them Friday. Planned Parenthood says the state will likely not renew its license.

SHAMLIAN: It would mark the first time since the 1973 Roe v. Wade decision that a state would be without an abortion clinic. Jennifer Bach used a clinic to terminate a previous pregnancy due to a genetic anomaly.

JENNIFER BACH: If something's wrong, I won't be able to do anything in the state we live in. And that feels awful in a way I don't really know how to articulate.

BRIAN WESTBROOK: So, the way this was written, we can save lives immediately here in the state of Missouri with or without Roe v. Wade.

SHAMLIAN: At least 15 states have enacted abortion restriction or outright bans in 2019. Five states have passed so-called “heartbeat” bills, forbidding abortion once a heartbeat is detected, as early as six weeks. Louisiana will likely pass its heartbeat bill tomorrow. John Milkovich is sponsoring it.

JOHN MILKOVICH (D): Actually, our belief is that if someone commits a sexual assault, the unborn baby has committed no crime.

SHAMLIAN: The vote, scheduled for tomorrow here at the Louisiana state capitol. It is expected to pass. This state has a Democratic governor, and in a divide with other Democratic leaders, Governor John Bel Edwards says he will sign this legislation into law. Margaret.

SAVANNAH GUTHRIE: Next tonight, big developments in the heated battle over abortion. The Supreme Court handing down a major decision today. And in one state women seeking an abortion may have to leave to get one. We get more now from NBC's Anne Thompson.

ANNE THOMPSON: Missouri could become the first state in the nation with no abortion clinic. This Planned Parenthood facility in St. Louis going to court to stay open beyond Friday, unable to reach an agreement with Missouri's health department to renew its license. Two years ago, Jenny Bach says this is where she went to have an abortion.

JENNY BACH: I know that we made the best choice for her.

THOMPSON: But with no clinic and a new law the Governor signed Friday banning abortions after eight weeks, she and her husband would no longer have that option. They ended her pregnancy at 15 weeks after learning their daughter had a genetic disorder and would die soon after birth. Now they are expecting another child.

BACH: I believe my greatest act of love as her mother was to suffer myself instead.

THOMPSON: Louisiana is expected to enact an even stricter law, banning abortion once a fetal heartbeat is detected, as early as six weeks into the pregnancy.

RYAN GATTI (LA State Senator-R): We should look at when the heart starts beating to determine when life starts.

And for those looking for signs from the Supreme Court, today mixed signals on Indiana's law. The justices letting stand the lower court's decision blocking the law banning abortions on gender, race, or disability, but upholding the requirement fetal remains be buried or cremated.

AMY HOWE: It's becoming sort of increasingly clear and perhaps likely that there are several justices who just aren't ready to wade into the issue of abortion yet if they can possibly help it.

THOMPSON: Something several states are not afraid to do. Anne Thompson, NBC News, Chicago.