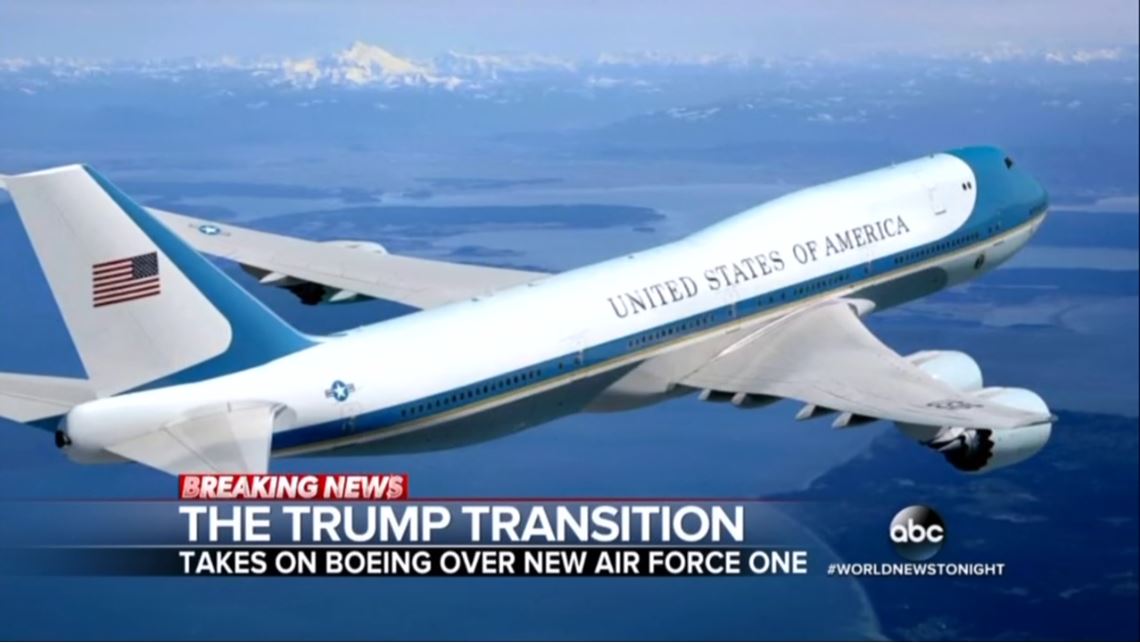 Despite recent revelations that the Pentagon may have been hiding $125 billion in wasteful spending, the Big Three networks (ABC, CBS, and NBC) all knocked President-Elect Donald Trump Tuesday for tweeting his disapproval of the $4 billion price tag of two new presidential aircraft. “President-Elect Donald Trump's sparking a new controversy over Air Force One after once again, taking to social media to criticize an American business,” whined fill-in Anchor Tamron Hall on NBC Nightly News. But each one of them reported a different price tag for the project.

Trump’s liberal media triggering tweet said, “Boeing is building a brand new 747 Air Force One for future presidents, but costs are out of control. More than $4 billion. Cancel order!" He explained to the press in the lobby of Trump Tower, “Well, the plane is totally out of control. I think it's ridiculous. I think Boeing is doing a little bit of a number.” Both NBC and ABC spun the facts heavily to try and discredit Trump’s claim.

NBC’s Hallie Jackson stuck up Boeing reporting that, “The aviation company saying in a statement, it looks forward to delivering ‘The best planes for the president at the best value for the American taxpayer.’” She continued, “Some experts warn, it's too early to say the Boeing contract is too expensive.” She never reported an actual number for the cost of the aircraft.

“But there is no $4 billion deal,” claimed ABC’s Tom Llamas on World News Tonight, “The Pentagon projects the cost could exceed $3 billion.” Llamas then chided that, “And the jets would likely be for Trump's successor, not Trump himself,” as if wasteful spending only effects the here and now.

On CBS Evening News, Nancy Cordes was the only network reporter to corroborate Trump’s claim about the cost, “The budget for the new Air Force One currently sits at about $3 billion and could climb, as Mr. Trump said today, to $4 billion.” But she oddly mocked him for preferring his plane because, “His 757 can't refuel midair or deflect missiles.” NBC’s Jackson did this as well, noting that presidential planes needed to be able to survive a nuclear blast.

Llamas on the other hand went after Trump for publicly discussing deals that would benefit Americans workers. He seemed to scold Trump for claiming that Carrier deal was great for worker because, according to him, 600 jobs were still going to Mexico while 1,100 stayed. So is Llamas arguing that no Carrier jobs are better than a majority of them?

He also attacked Trump for making a deal with a Japanese business man who, according to Trump, would “to invest $50 billion in the United States and 50,000 jobs.” Llamas claimed Trump was “claiming credit for another deal,” even though they both men met and he never explained how Trump was stealing credit.

Ironically, in 2009 President Barack Obama expressed concern about budget overruns for development of a new fleet of Marine One presidential helicopters. The program was cancelled in May of the same year when the projected cost of the project was roughly $13 billion dollars.

TAMRON HALL: And now to politics and President-Elect Donald Trump's sparking a new controversy over Air Force One after once again, taking to social media to criticize an American business. This time, he's threatening to cancel an order for new presidential planes from aviation giant Boeing. We get details from NBC's Hallie Jackson.

DONALD TRUMP: I don't know what I'd do without the airplane.

JACKSON: His own. A Boeing. Made by the company he's targeting today, threatening to cancel a contract for two new presidential planes, upgrades he says he doesn't need.

TRUMP: I think it's ridiculous. I think Boeing is doing a little bit of a number. We want Boeing to make a lot of money, but not that much money. 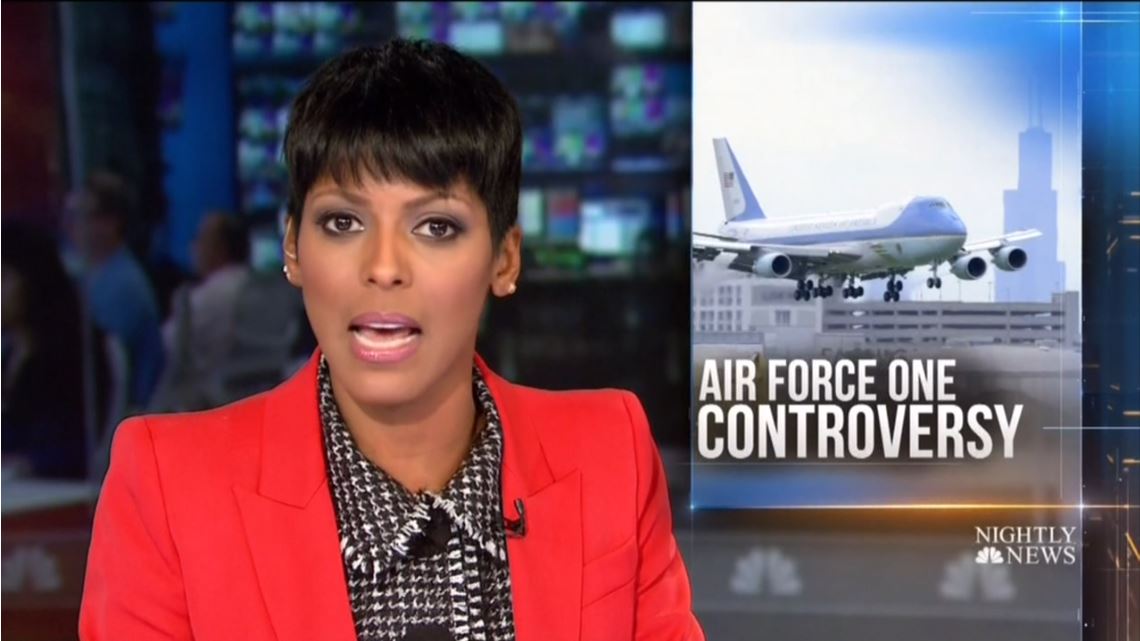 JACKSON: Donald Trump's tweet to cancel the order for the future Air Force Ones, sent Boeing stock into a slide before it bounced back. The aviation company saying in a statement, it looks forward to delivering “the best planes for the president at the best value for the American taxpayer.” Its CEO, in a report published before Trump's tweet, suggesting Trump's trade proposals, especially toward China, could hurt. Some experts warn, it's too early to say the Boeing contract is too expensive.

LOREN THOMPSON: I think the president-elect took to Twitter before he really understood the details. We don't know what this program is going to cost, because the Air Force hasn't said yet what the plane needs to do.

JACKSON: Military sources tell NBC News, the planes must be able to survive a nuclear blast and communicate with those on the ground under any circumstances. But Donald Trump's trying to show he's changing how the government does business with business.

UNIDENTIFIED TRUMP SUPPORTER: I think he is being a good steward of our dollars, our American dollars.

JACKSON: To some, his Boeing threat, an example of the businessman they elected, doing exactly what they'd hoped. Overall, is there anything that the president-elect could do once he takes office that would cause you to really rethink your support of him?

UNIDENTIFIED TRUMP SUPPORTER: If he stops being Donald Trump.

DONALD TRUMP: Well, the plane is totally out of control. I think it's ridiculous. I think Boeing is doing a little bit of a number.

TOM LLAMAS: No explanation for why he's attacking Boeing, but with the tweet came about an hour after the company's CEO was quoted, criticizing Trump's rhetoric on China. During the campaign Trump warned Boeing would send jobs there.

TRUMP: Your Boeing plant in this area will be gone. And we don't want that to happen.

LLAMAS: Air Force One, a super-charged 747, designed to be essentially a White House in the sky. Our Jon Karl getting a rare look. The oval office. The situation room. A full command center.

UNIDENTIFIED MAN ON AIR FORCE ONE: There's 87 telephones on the airplane. There’s three different networks, top secret all the way down to non-secure. 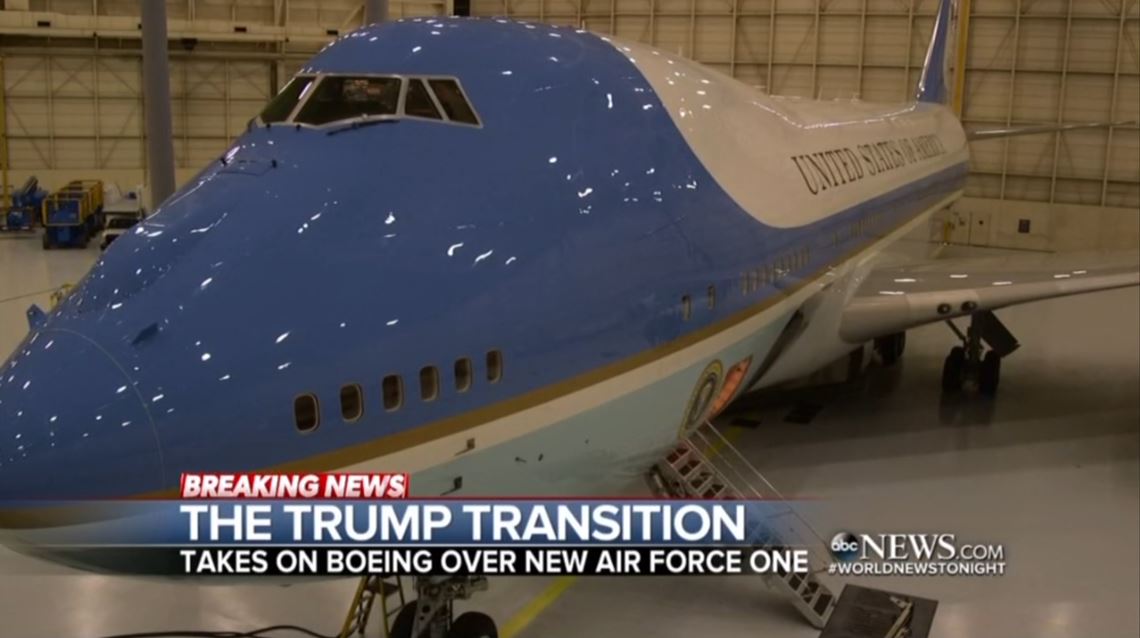 LLAMAS: But the aircraft is 25 years old and is quickly becoming obsolete. Boeing tapped to build two new planes. But there is no $4 billion deal. The Pentagon projects the cost could exceed $3 billion. And the jets would likely be for Trump's successor, not Trump himself. The president-elect now routinely tweeting about deals with specific companies.

There was Carrier, Trump announcing the company would stay in Indianapolis, quote, “Great deal for workers.” We later found out that while Carrier agreed to preserve 1,100 jobs, it is still moving 600 jobs to Mexico. Late today, Trump tweeting again, claiming credit for another deal, this time with a Japanese bank that owns Sprint. Again, Trump descending to the lobby, this time, with the Japanese CEO.

LLAMAS: But so far, no details about that deal. Or exactly how and when all those jobs would come to the U.S.

CORDES: The two planes that currently serve as Air Force One are more than 25 years old. They are the last 747 200 series passenger jets still in use in the United States. The Air Force contracted with Boeing last year to design two or three replacement. Slated for completion in 2023.  Mark Rosenker oversaw upgrades to air force one after the 9/11 attacks. 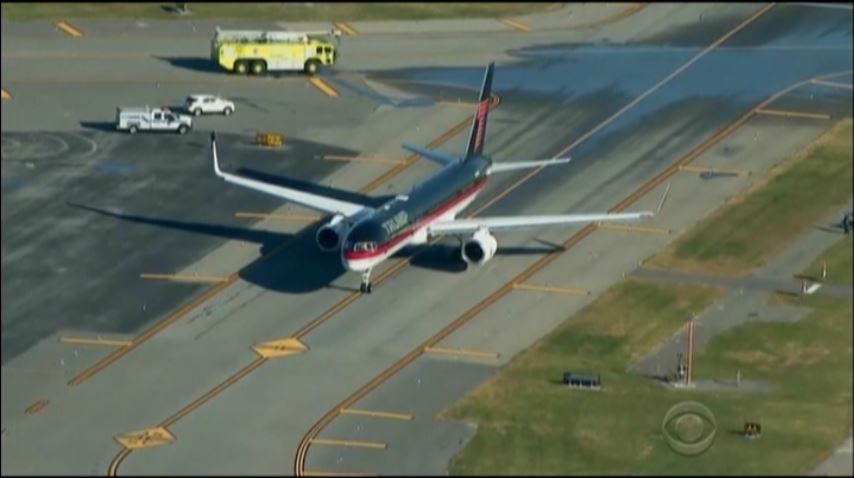 MARK ROSENKER: It is cheaper to buy a brand new aircraft, bring it into the 21st century, than to try to maintain an aircraft which was built in the 80s.

CORDES: It was unclear what triggered Mr. Trump's comments today, but his tweet came just 22 minutes after the Chicago Tribune posted this article, highlighting differences between Mr. Trump and Boeing's CEO, when it comes to trade with China. The president-elect has also signaled a preference for his own jet, insisting last summer that "Air Force One is a step down in every way," though his 757 can't refuel midair or deflect missiles.

ROSENKER: It's a beautiful aircraft but is not capable of supporting the president of the United States.

CORDES: A few hours after bashing Boeing, Mr. Trump praised a Japanese company, Softbank, making this announcement in the lobby of Trump Tower with the firm's CEO.

CORDES: The budget for the new Air Force One currently sits at about $3 billion and could climb, as Mr. Trump said today, to $4 billion. He was a Boeing stockholder, Scott, but his campaign claimed today that he quietly sold all of his stocks back in June.