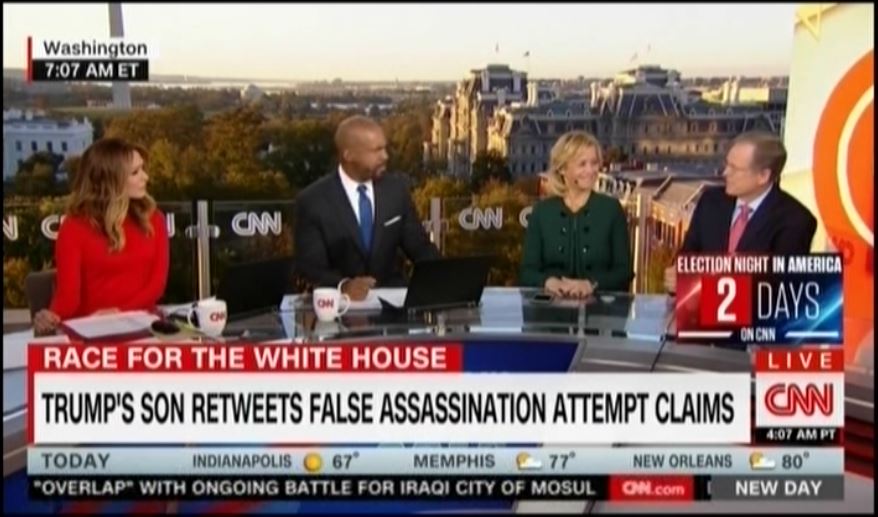 Late Saturday evening, a Donald Trump rally was disrupted as a cry of “gun” caused the Secret Service to leap into action and whisked the candidate away, while the crowd and officers subdued the suspected individual. Austyn Crites was the individual in question but no firearm was located, but he did have a “Republicans Against Trump” sign. With the recent video evidence of Democrats paying to disrupt Trump rallies the incident is suspect, but not to CNN anchor Victor Blackwell and commentator Hilary Rosen who flat out rejected the idea with little evidence.

Blackwell played a clip of Crites giving his account of the event, in which he stated be feared for his life. The CNN host seemed to be showing off his 20/20 hindsight and seemed put off by the crowd’s reaction.

Senior adviser, and former Georgia Representative, Jack Kingston was on the CNN panel and noted that there could be a lot of confusion in a large rally crowd. He then reminded the panel that such events at Trump rallies should be viewed with skepticism since, “We do know that there were paid Democratic operatives, this last summer, who were paid to disrupt Trump rallies.”

As Kingston was saying that the media didn’t cover the Project Veritas videos, Blackwell quickly cut him off and argued, “In this case this was a Republican against Trump that's what his sign [said].” So, using Blackwell’s reasoning, just because Crites held a sign it automatically means he was telling the truth about himself.

Kingston again brought up the undercover video evidence of the underhanded liberals before being interrupted by Democratic operative Hilary Rosen, who claimed it is not known if the videos tell the truth. “There was some video that suggested they wanted to do that but no evidence,” she forcefully dismissed. She then claimed violence is a fixture at Trump’s rallies, “First of all, there has been violence at Trump rallies before. We've seen this.”

But that’s exactly what the videos show. There was no “suggestion” for these actions, just admission. Scott Foval, who at the time was with Americans United for Change, open admitted to what he called “conflict engagement” and added “We’re starting anarchy here.” Project Veritas also released a video of two other liberal operatives admitted to being a part of violence sparking operations. Soon after the video was released, Foval was fired by AUC.

“From Democrats,” argued Kingston about the violence that has been seen. “Jack, you know, that's just not true,” Rosen exclaimed. She seems to have forgotten all the video evidence filmed and reported bu news organizations of leftists attacking Trump supporters and police officers in San Jose, California and Albuquerque, New Mexico. Rosen then went on to tout how Democrats deal with protesters, citing President Barack Obama:

There have been protests but look at what President Obama did just last week in welcoming a Trump protest at a Democrat's rally. So, you know, Democrats I think have done the best they can in what has been a very difficult environment.

JACK KINGSTON: I think there's always some excitement and some confusion in a presidential rally. We do know that there were paid Democratic operatives, this last summer, who were paid to disrupt Trump rallies. You know, I think it was a big scandal that probably didn’t get covered as much—

VICTOR BLACKWELL [Cutting off Kingston]: In this case this was a Republican against Trump that's what his sign and the reverend [Andre Mahanna] here said that there's been so much talk about the hate from Donald Trump it is the media's hate that brought this upon Donald Trump. Paraphrasing there.

KINGSTON: Well, I would not necessarily agree that it's the media's fault. But I would say it's probably unlikely that he was an innocent Republican with a sign. I don't think the Trump supporters or anybody would react to that so negatively. I think that's probably -- you know, we don't know what the backstory is, but we do know that there were paid Democratic operatives that went out –

HILARY ROSEN: No, we don’t.

KINGSTON: --that went out to Trump rallies. Robert Creamer. I think it was well documented Hilary.

ROSEN: There was some video that suggested they wanted to do that but no evidence. And look, I would just say this. First of all, there has been violence at Trump rallies before. We've seen this. We have seen--

ROSEN: There have been protests but look at what President Obama did just last week in welcoming a Trump protest at a Democrat's rally. So, you know, Democrats I think have done the best they can in what has been a very difficult environment.

I was going to go to a different point, a bigger point, which is, you know, at the end of this very divisive, difficult campaign, it is hard to run for office. It's often scary. And people in politician's families, and Jack knows, he was a member of congress, they put themselves out on the line every day. They go to event after event after event. Secret service can't always protect you. And I do think that we ought to just step back as Americans and say, you know what, our democratic process ought to be protecting these kinds of events. We shouldn't have that kind of threat of violence at any event.