The same liberal networks who sprinted to dismiss concerns about Hillary Clinton’s health as part of a “wacky strategy” by Donald Trump, turned a blind eye Tuesday night to similar accusations made about the GOP nominee. Following the first presidential debate Monday night, Clinton surrogate Governor Howard Dean tweeted that he suspects Trump had a cocaine habit and used it before the debate. He stuck by that accusation Tuesday on MSNBC stating that Trump has, “a signature of people who use cocaine.”

Even though NBC News didn’t feel the need to give Dean’s conspiracy air time, they did have a report of it on their website. Reporter Cassandra Vinograd seemed play along with the Dean’s accusation writing, “The Republican candidate sniffled repeatedly during Monday night's debate — setting off social-media memes and sparking the hashtag #TrumpSniffle.”

The failed presidential candidate doubled down during an interview with anchor Kate Snow on MSNBC. “So look, do I think at 70 years old he has a cocaine habit? Probably not,” he mocked, “But, you know, it's something that -- I think it would be interesting to ask him and see if he ever had a problem with that.”

When pushed by Snow to explain why he created such an accusation, when his own candidate found it inappropriate for Rudy Giuliani to do it to her, Dean argued:

Well look, Donald Trump has not only made his tax returns public. He’s also not made his medical history public in any meaningful way. Hillary Clinton has done that and answered any questions they want to raise.

The “Big Three’s” reaction, or lack thereof, to Dean’s ridiculous accusation further demonstrates the liberal media’s double standard between Democrats and Republicans on health. For instance, back in 2008 the level of scrutiny ABC, CBS, and NBC put on Senator John McCain was border line disgraceful. But when it came to Clinton, eight years later, they brushed it under the rug. And it took Clinton stumbling in the street for them to take it seriously.

KATE SNOW: So, following a bunch of sniffles, Governor Dean, you wrote on Twitter, “Notice Trump sniffing all the time. Coke user?” Why did you go there?

HOWARD DEAN: Well, you can't make a diagnosis over the television. I would never do that, but he has some interesting -- that is actually a signature of people who use cocaine. I'm not suggesting that Trump does, but –

SNOW: Well, you are suggesting it, actually in a tweet. 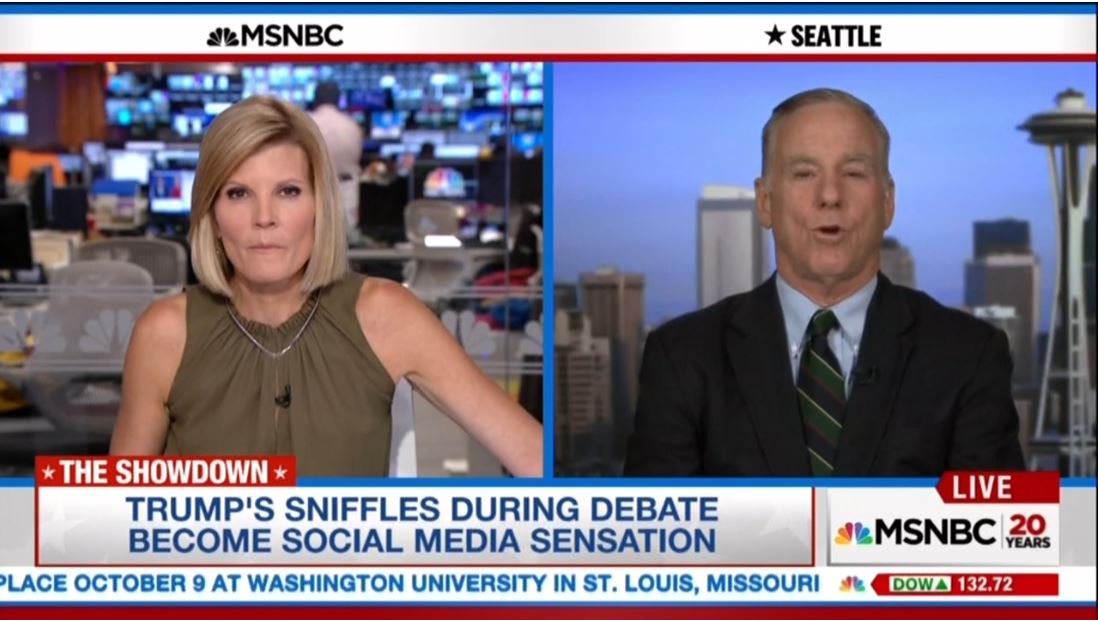 DEAN: No, I’m suggesting we think about it cause here's the interesting constellation. So, he sniffs during the presentation, which is something that users do.

He couldn't keep himself together. So look, do I think at 70 years old he has a cocaine habit? Probably not. But, you know, it's something that -- I think it would be interesting to ask him and see if he ever had a problem with that.

SNOW: So, as a physician and as a medical person yourself, you're suggesting we ought to look at whether the Republican candidate for president has a cocaine habit?

DEAN: No I don't think he has a cocaine habit. But again, I don't make any diagnosis over the television. I don't. I think that's wrong. I think doctors shouldn't do it. Doctors have done it in the past and they shouldn't do it. But I was just struck by the sniffing and then by his behavior, which all sort of came together, these four symptoms. You know, do I think he has a cocaine habit? I think it's unlikely you could mount a presidential campaign at 70 years old with a cocaine habit but it was pretty striking.

SNOW: This is reminding me, a lot sir, of Rudy Giuliani raising a few weeks ago raising very, not similar, but different questions about medical history and your candidate, Hillary Clinton. To which your campaign responded, this is inappropriate. We shouldn't be raising questions about Hillary Clinton's health with absolutely no substance or proof. You don't see the parallel?

DEAN: Well look, Donald Trump has not only made his tax returns public. He’s also not made his medical history public in any meaningful way. Hillary Clinton has done that and answered any questions they want to raise.

SNOW: What if a Trump supporter had suggested Hillary Clinton was using drugs last night?

DEAN: I suspect she would have said, “No, I’m not. And here's not and here's my medical report that shows so.”

SNOW: You're not going to delete the tweet? You don't regret it?

SNOW: You don’t apologize for it, is that right?