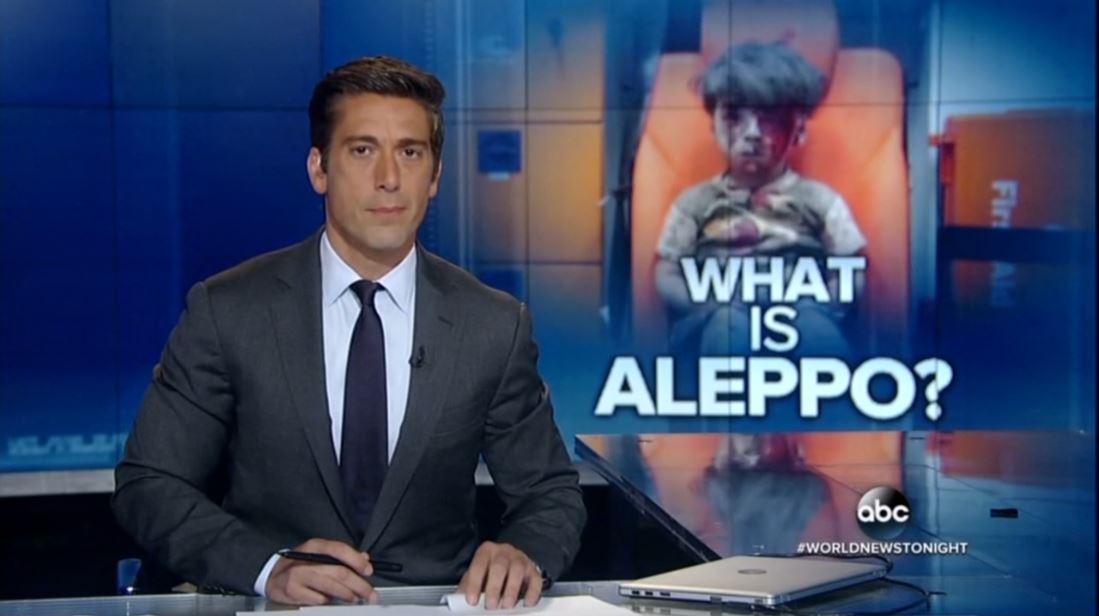 The “Big Three” network news programs were all a buzz Thursday evening over a seemingly inexplicable exchange that occurred on MSNBC’s Morning Joe that morning. “And what is Aleppo,” Libertarian presidential candidate Gary Johnson inquired after being asked by journalist Mike Barnicle what his plan for the city was.

“Johnson stumped not by a gotcha question but a basic foreign policy question in the headlines for months,” stated ABC’s Martha Raddatz on World News Tonight. But the evening prior Hillary Clinton was grilled in a forum about her use of a private e-mail server and they all but ignored it.

The nets railed against Johnson hard. “The video immediately going viral with the hashtag “what is Aleppo,” said NBC’s Peter Alexander on Nightly News, while reading a vicious tweet, “On Twitter, “Dear Gary Johnson, this is Aleppo.”” Alexander even ridiculously asked a member of the Commission on Presidential Debates if the flub means Johnson would be disqualified from the debates. The NBC reporter ended by making fun of the candidate, “At least now everybody knows Johnson's name.”

CBS anchor Scott Pelley also joked about Johnson on Evening News saying: “And then today, there is the third-party candidate who wants to be the third President Johnson. He wanted to put himself on the map in the worst way.” All-in-all the nets spent six minutes, two seconds marveling at Johnson’s flub. And CBS was the only network to mention that Green Party candidate Jill Stein had a warrant issued for her arrest in North Dakota.

But there was other was other important news of the day regarding Clinton’s e-mail scandal. During the Commander-in-Chief Forum Wednesday night, Clinton faced tough questioning from moderator Matt Lauer and audience member Lieutenant John Lester about her handling of classified material. ABC and NBC were the only networks to report Clinton’s grilling, but they mostly whined about it.

“One issue that will not go away? Her e-mails,” stated ABC’s Cecilia Vega, “Clinton spent a quarter of the time that she was on that stage answering questions about them.” “But it’s the e-mail still giving her the biggest headache,” parroted Clinton fangirl Andrea Mitchell.

Both networks also repeated Clinton defense lines pointing to former Secretary State Colin Powell’s message to Clinton discussing the use of private e-mails. “Now, new insight into her e-mail use, and the advice she received from one of her predecessors,” hyped Vega, while Mitchell jabbed saying, “House Democrats releasing Colin Powell's message telling her how he skirted the rules for his private e-mails.” The total time dedicated to Clinton’s e-mails was one minute, 40 seconds.

In addition, the only Spanish-language network to cover the events of the Commander-in-Chief Forum was Univision. The network spent a mere 14 seconds on Clinton’s emails, out of a total two minutes, 20 seconds dedicated to the forum.

DAVID MUIR: There are also two other much lesser known candidates in the race for president, and one of them today was asked, what would you do about Aleppo? Of course, the center of so much bloodshed and heartbreak in Syria. He asked, “What is Aleppo?” Here's Martha Raddatz with the moment.

MARTHA RADDATZ: The stunning moment playing out on live TV. Libertarian presidential candidate Gary Johnson stumped not by a gotcha question but a basic foreign policy question in the headlines for months.

RADDATZ: Aleppo, the largest city in war-torn Syria. Just two days ago, these images from Aleppo broadcasted around the world. More than 100 people, including dozens of children, sickened by a chlorine gas attack. Just last month, this picture became an international call to action. 5-year-old Omran Daqneesh, pulled out from the rubble of his bombed-out Aleppo home. Minutes after his interview fail, Johnson a former governor of New Mexico, acknowledged he quote, “blanked.” 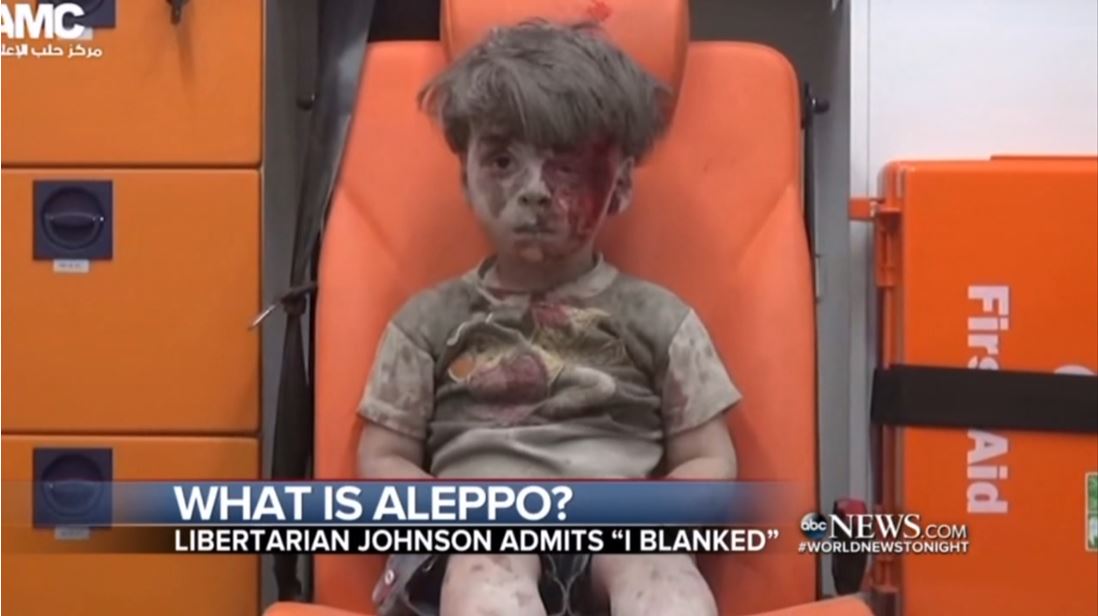 JOHNSON: No one is taking this more seriously than me. I feel horrible.

MARK HALPERIN: What do you think will happen now?

JOHNSON: Well, that I have to get smarter and that's just part of the process.

RADDATZ: But later, on ABC's The View, Johnson taken to task.

JOY BEHAR:  I know what it is, and I should not be any smarter than you, because you're running for president. I think it's a disqualifying statement, frankly.

MUIR: All right, let's get right to Martha tonight. Did he have any sort of explanation, why he didn't know what Aleppo was or where it was?

RADDATZ: David, he said he was thinking in terms of acronyms, that Aleppo was somehow an acronym for something. But he also said there was really no excuse whatsoever for his failure and he added that, “if you are running for president, everything should be fair game.” So, there have you it, David.

LESTER HOLT: Now to the moment on live television this morning that left so many stunned including the hosts themselves. Governor Gary Johnson, the libertarian candidate for president, who is hoping to be an alternative for voters unsatisfied by Clinton and Trump, was asked a question about a major humanitarian crisis that has dominated news headlines for years now. It was Johnson's response that caught everyone off guard. Here's NBC's Peter Alexander.

WILLIE GEIST: Governor, good to have you with us. 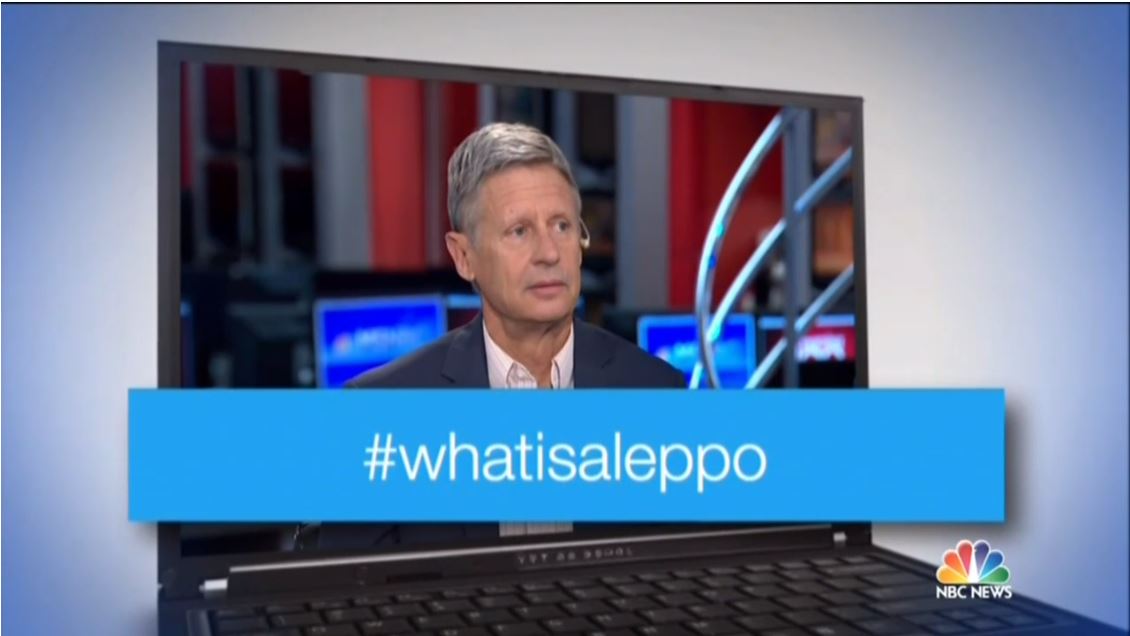 PETER ALEXANDER: Before this moment on MSNBC today, the question most people were likely asking, who is Gary Johnson?

ALEXANDER: A stunning political stumble for the former New Mexico governor and Libertarian Party presidential nominee. The video immediately going viral with the hashtag “what is Aleppo.” On Twitter, “Dear Gary Johnson, this is Aleppo.” Johnson responded online, “I'm human, adding, I blanked. It happens.” Appearing soon after on The View.

JOHNSON: No excuse. I was thinking in terms of acronym, Aleppo.

JOY BEHAR: I think it's a disqualifying statement, frankly.

ALEXANDER: Johnson's flub couldn't have come at a worse time. He needs 15 percent support nationwide to squeeze on to the debate stage. Right now polls have him just below 10. Yesterday Mitt Romney pushed for him. And today a member of the commission on presidential debates, Mitch Daniels, gave Johnson a pass.

MITCH DANIELS: Oh, if we were going to disqualify candidates for one comment they'd like to have back, it would be a small debate.

VEGA: One issue that will not go away? Her e-mails. Clinton spent a quarter of the time that she was on that stage answering questions about them. And she insisted she was careful handling classified material.

CLINTON: I took it very seriously. When I traveled, I went into one of those little tents that I'm sure you've seen around the world, because we didn't want there to be any potential for someone to have embedded a camera to try to see whatever it is that I was seeing that was designated, marked, and headed as classified.

VEGA: But now, new insight into her e-mail use, and the advice she received from one of her predecessors. In an e-mail, former Secretary of State Colin Powell, a Republican, told Clinton he, too, used, quote, a personal compute there was hooked up to a private phone line to communicate with a wide range of friends directly, without it going through the state department's servers.” Powell said he “even used it to do business with some foreign leaders and some of the senior folks in the state department on their personal e-mail accounts.”

MUIR: And Cecilia Vega with us live from Charlotte. And Cecilia, Hillary Clinton also seemed to fire back today when asked about criticism she didn't smile enough last night.

VEGA: Well, David, the head of the RNC tweeted that she seemed angry and on the defensive and that she didn't smile enough. Well, she was smiling today when she says she doesn't take anything that the RNC says seriously. She said, quote, “Trump chose to talk about his deep admiration and support for Vladimir Putin. Maybe he did it with a smile, and I guess the RNC would have liked that.”

MITCHELL: But it’s the e-mail still giving her the biggest headache. House Democrats releasing Colin Powell's message telling her how he skirted the rules for his private e-mails. Although Clinton told the FBI she did not take Powell's advice. Her behavior an issue for this veteran last night.

UNIDENTIFIED VETERAN: Had I communicated this information not following prescribed protocols, I would have been prosecuted and imprisoned.

CLINTON: I communicated about classified material on a wholly separate system. I took it very seriously.