During the December 27 CBS This Morning, National Correspondent Chip Reid announced that Trump’s push to repeal ObamaCare “could hurt many of his own supporters.” 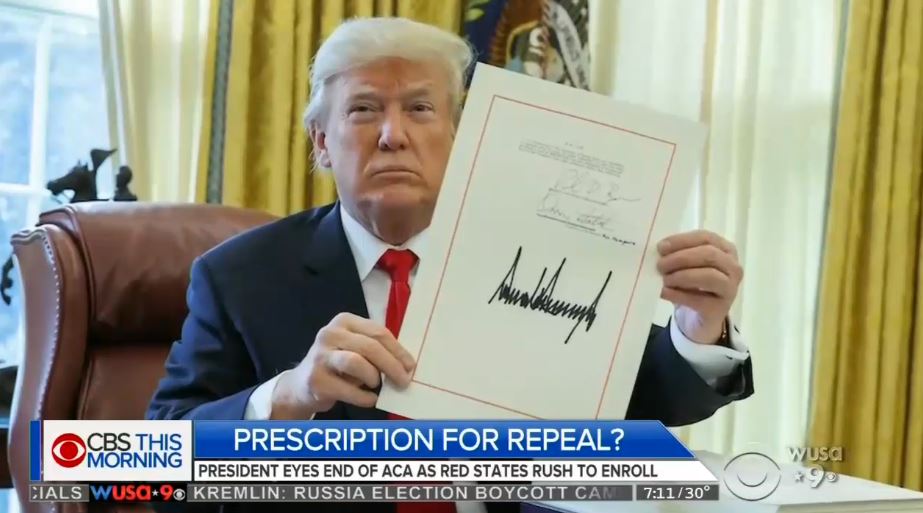 Reid turned to Slate’s Jamelle Bouie (also a CBS News political analyst). “I do think this is dangerous game for the president,” Bouie said. “One of his single largest drops in popularity came in March, after congressional Republicans began moving ahead with ObamaCare repeal.” As a reminder to people unfamiliar with Bouie, he’s the political analyst who wrote back in November that it was “abhorrent” and “perverse” to suggest that Trump voters were “good” people.

The segment also pointed to the number of ObamaCare sign-ups this year in red states, seeming to imply that these sign-ups showed support for the program by Trump voters. “According to one respected analyst, 62% of this year's ObamaCare enrollees live in states that President Trump won in 2016,” Reid reported. Reid also quoted Bouie as saying that “the big surprise is that red states are signing up faster than blue states.”

The “respected analyst” Chip Reid is referring to is likely The Associated Press, which recently released a report on government data which “found that 7.3 million of the 8.8 million consumers signed up so far for next year come from states Trump won in the 2016 presidential election.” However, there is no indication in the data of how many of these people were Trump supporters, or how many signed up simply to avoid paying the penalty for not having insurance.

Trump’s opposition to ObamaCare certainly polls low – among journalists. According to the MRC’s extensive Bias by the Minute project, in the first 80 days of the Trump presidency (from January 20 to April 9), the effort to repeal ObamaCare was the third most covered Trump-related topic by the evening news shows on ABC, CBS and NBC with 152 minutes of coverage. 94 percent of this coverage was negative.

In contrast, on September 15, a Politico-Harvard poll showed that a repeal of ObamaCare topped “GOP voters’ to-do lists.” According to the Politico write up about the poll: “Among Republican respondents, repealing Obamacare was the most critical priority, outpacing other concerns like tax reform (34 percent said that the issue was ‘extremely important’) and building a border wall (28 percent thought it was ‘extremely important’).”

During the Obama administration, ABC, CBS and NBC all repeatedly either failed to report on ObamaCare’s failures or downplayed them.

DANA JACOBSON: President Trump on vacation in Florida promises more bipartisanship in the new year. The president tweeted the Republicans and Democrats will come together on a new plan to replace Obamacare. Chip Reid is in West Palm Beach Florida near the President’s Mar-a-Lago resort. Chip, good morning.

CHIP REID: Good morning. President Trump played golf yesterday with Georgia Senator David Perdue, a big proponent of repealing Obamacare. Of course, that’s also a big priority for President Trump next year. But the numbers suggest that could hurt many of his own supporters.

PRESIDENT TRUMP: It ultimately leads to the end of Obamacare. Essentially, I think Obamacare is over.

REID: The president's prediction of the demise of Obamacare comes as about 8.8 million Americans in 39 states signed up for coverage at Healthcare.gov this fall. That's down just 4.4% from last year, despite the trump administration pulling advertising and slashing the enrollment period from 90 days to 45.

Both Republicans and Democrats view health care as a top priority for Congress and President Trump, making it a central issue in the upcoming midterm elections. The Congressional Budget Office projects that repealing the Individual Mandate will leave about 13 million more people without coverage by 2027. And, according to one respected analyst, 62% of this year's Obamacare enrollees live in states that President Trump won in 2016.

JAMELLE BOUIE: I do think this is dangerous game for the president. One of his single largest drops in popularity came in March, after congressional Republicans began moving ahead with Obamacare repeal.