When a white supremacist endorsed Trump, the broadcast networks blamed Trump for it. But when the radical father of a terrorist endorsed Hillary and showed up in the front row of one of her rallies, these same networks quickly dismissed it as nothing worth worrying about.

During the first three days of coverage after David Duke, a white supremacist and former leader of the KKK, endorsed Donald Trump back in February, the evening news shows on ABC, CBS and NBC devoted 11 minutes and 35 seconds to bashing Trump for not immediately denouncing Duke, after he already had.

But when the father of the Orlando terrorist, who himself openly supports the Taliban, showed up in the front row of a Hillary Clinton rally and vocally endorsed her, those same shows on ABC and CBS quickly dismissed it as a coincidence, giving it only 1 minutes 54 seconds of coverage on August 9.  NBC went a step further and failed to cover Seddique Mir Mateen attending Hillary’s rally at all until the following day, when they gave it a whopping 18 seconds of coverage. ABC and CBS didn’t mention this story at all on August 10.

To add to the scandal, part of the purpose of the Orlando rally for Hillary that Mateen attended was to remember the victims of the massacre that his son had caused.

The content of the coverage is every bit as biased as the time difference. When Duke endorsed Trump, the outcry from the media was immediate. In stark contrast, when Mateen showed up at Hillary’s rally, the networks immediately dismissed it as coincidence.

“So, how did he get this prime spot?” ABC correspondent Cecilia Vega asked as she wrapped her coverage of the incident, “Secret service telling us Mateen passed through metal detectors like everyone else. Clinton's aides will only say, ‘This individual wasn't invited as a guest and the campaign was unaware of his attendance until after the event.’” 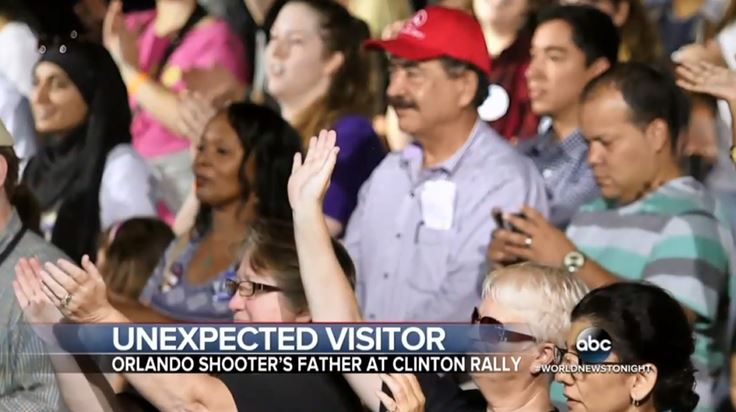 CBS Evening News anchor Scott Pelley was even more dismissive of this incident, spending a brief 24 seconds on the topic before moving on to hype “divisions in the GOP,” “Clinton opened a rally near Orlando yesterday by paying tribute to the 49 people who were murdered in June at the pulse nightclub. Well, it turns out just a few feet away, wearing a red hat, was Seddique Mateen, the father of the Orlando gunman. Today, the Clinton campaign said Mateen was not invited to the event, the event was open to the public.”

In contrast, on March 1, ABC anchor Tom Llamas described Duke’s endorsement as “the moment that’s jolted the Republican party.” Host Lester Holt led the February 29 NBC Nightly News with “in an election season filled with head-shaking moments, spray tans, the KKK and ear piece malfunctions are among the topics driving the conversation about the Republican race.” Not once did any of the networks even imply that Mateen was “driving the conversation about the Democratic race.”

After minimal coverage on the three broadcast networks, this story was dropped in favor of much-more-appealing-to-the-media Trump controversies. Back during March, the only thing that caused a drop in the Duke endorsement coverage (although it didn’t stop it completely) was the Super Tuesday primary voting on March 1.