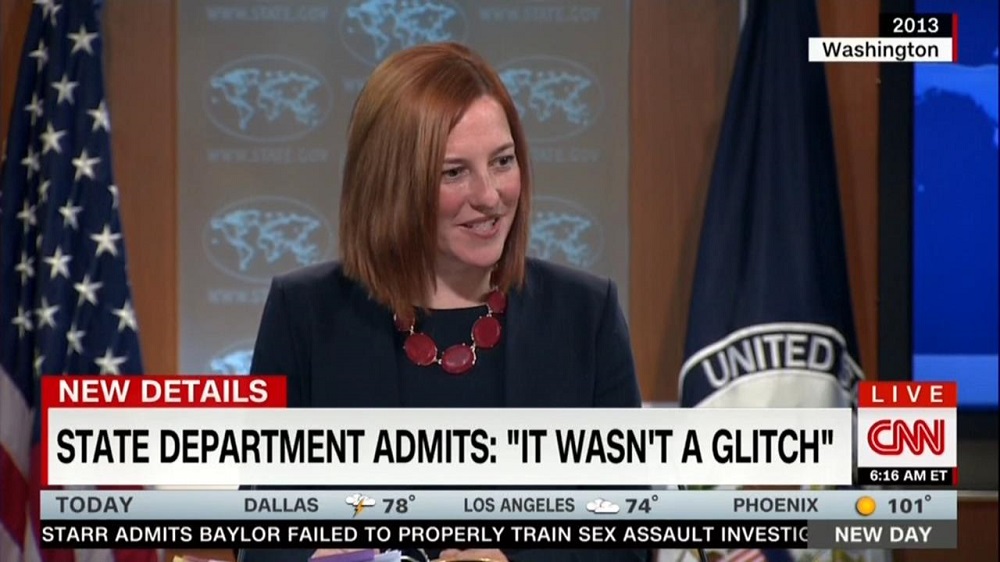 CBS This Morning and NBC's Today on Thursday followed in the footsteps of their networks' newscasts the previous evening in failing to cover the State Department's Wednesday admission about an intentional edit of an online video posting of a 2013 briefing. During that presser, Fox News's James Rosen asked about the Obama administration's secret nuclear negotiations with Iran. To their credit, ABC's GMA aired a news brief on the controversy on Thursday. CNN's AC360 devoted a full report to the revelation on Wednesday. Thursday's New Day also gave a brief on the story. [video below]

PAULA FARIS: And in Washington, the State Department now admits that a staffer deliberately deleted archived video from a 2013 news conference about the Iranian nuclear talks. Officials had previously blamed a glitch for the gap in the video, during which a reporter asked if the White House had lied about secret talks with Iran. It is unclear who ordered that video to be deleted.

The previous evening, Anderson Cooper led the 9 pm Eastern hour of his CNN program with the breaking news about the Cabinet department's revelation: "Serious questions for the U.S. State Department and the White House — they come after the admission that someone deliberately edited part of a videotaped State Department briefing addressing secret talks between the U.S. and Iran; and this contradicts how the State Department previously described what happened."

Cooper turned to correspondent Elise Labott and asked, "So, the deleted video was originally called a 'glitch.' What do we now know?" Labott explained the circumstances of the deletion/edit of the press briefing video. This led the CNN anchor to call out the State Department's explanation of the issue as "ridiculous":

ELISE LABOTT: Well, Anderson, this originally stems from a briefing in 2012 discussing secret talks about Iran. The spokesman at the time for Hillary Clinton said there were no talks going on. A year later, these talks are revealed. John Kerry's spokesman, Jen Psaki, is asked about it at the briefing; and she essentially says, sometimes, lying to reporters is necessary to protect these secret negotiations. And about a month ago, when a reporter tried to refer back to the video of that exchange on the website and YouTube, they found that was cut out.

So, the current spokesman, John Kirby, thought it was a little curious — had the department's legal adviser look into it. What he found: the same day of that briefing and question, the office that posts these videos on the State Department website got a call from an unidentified staff member in the department's Bureau of Public Affairs requesting that it be deleted — that several minutes of the briefing. Now, the person thought it was a weird request; checked with her supervisor — who approved it, saying it came from someone with authority in the State Department — don't remember who.

COOPER: So now, no one can supposedly remember who made the request to delete a portion of the video?

LABOTT: Well, I think there is, kind of, some selective memory going on. The person who took the call can't remember who called her on whose behalf; and neither can her supervisor. But they do remember that it definitely wasn't Jen Psaki; who, incidentally, said on Twitter today that she had no idea what happened and would never do something like that.

Now, the Bureau of Public Affairs is not huge. There are only a few high-level people who could have made such a request. And, to his credit, John Kirby investigated it; found amazingly, there was no policy in place about these kinds of deletions; put in a new policy that every video is going to be posted with all edits disclosed. And the — it's weird because the full transcript of the briefing has always been available online. The video has since been restored. But it kind of feeds into this whole idea that the White House was not completely honest about its dealings with Iran.

You may remember earlier this month: Ben Rhodes, the deputy national security adviser, told the New York Times that the White House created this narrative that the talks didn't take place. So, essentially, they're admitting they lied.

COOPER: So, this person who took the call claims they have no memory of who actually made the request; and they went to their boss, and the boss says—

COOPER: Well, I have no idea who we talked about — who made this request as well—

LABOTT: Yeah. It's kind of curious—

The following morning, on New Day, CNN anchor Alisyn Camerota gave a 26-second news brief on the "embarrassing" disclosure by the State Department:

ALISYN CAMEROTA: Well, an embarrassing admission from the State Department — officials confirming someone in their public affairs department ordered several minutes cut from an archived video of a 2013 press briefing. Now, the edited video featured reporter James Rosen asking whether the administration was lying about secret talks with Iran. Officials, at first, blamed the gap in the video on a technical 'glitch.' But now, they admit they lied to protect sensitive negotiations.