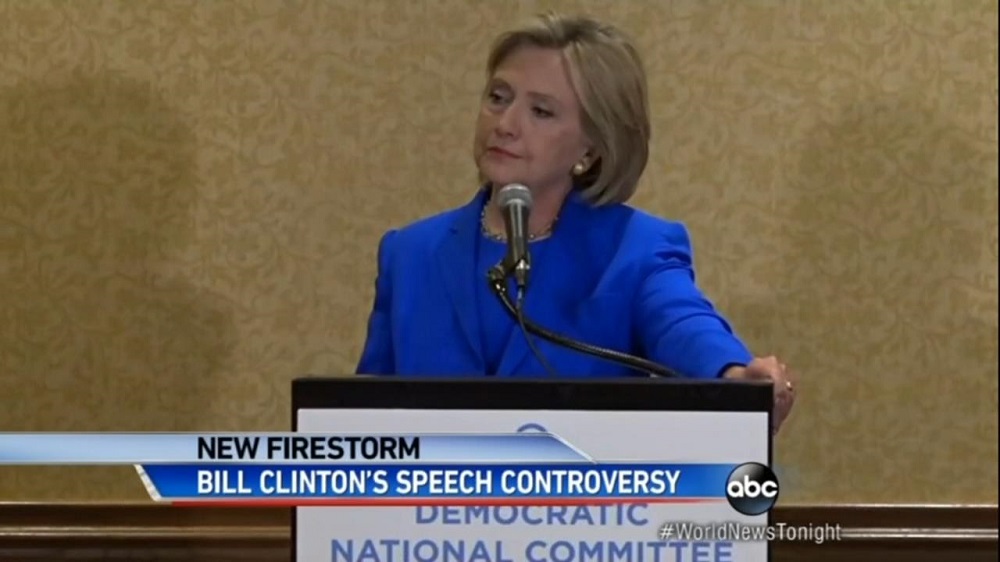 ABC, CBS, and NBC 's evening newscasts on Friday all failed to cover Hillary Clinton's latest inflammatory attack on Republicans – this time on illegal immigration. Clinton slammed the GOP earlier in the day on the issue, and made a thinly-veiled comparison to the Holocaust: "I find it the height of irony that a party, which espouses small government, would want to unleash a massive law enforcement effort...to go and literally pull people out of their homes and their workplaces, round them up, put them...in buses, boxcars – in order to take them across our border." [video below]

ABC's World News Tonight aired a report on Bill Clinton's controversial request to speak in North Korea while his wife was secretary of state. Jonathan Karl, who covered the story earlier in the day on Good Morning America, included a clip from the press conference where the former New York senator made her "boxcar" reference. However, he didn't mention that Nazi-invoking comment. On NBC Nightly News, Kristen Welker zeroed in on "Hillary Clinton and her fellow Democratic rivals playing to a friendly room at the DNC summer meeting in Minneapolis." But like Karl, Welker omitted Mrs. Clinton's remarks on illegal immigration. CBS Evening News didn't include any reports on the 2016 presidential race.

CNN, Fox News Channel, and MSNBC all covered the former secretary of state's press conference at the Democratic National Committee event during their 1 pm Eastern programs. An unidentified reporter asked, "How do you plan on dealing with 11 million undocumented immigrants in the U.S.?" Clinton replied by immediately going on the offensive against Republicans. She included her "boxcar" remark in her answer:

HILLARY CLINTON: Well, I'm glad you asked me that, because I know that there are some on the other side who are seriously advocating to deport 11, 12 million people who are working here. I find it the height of irony that a party, which espouses small government, would want to unleash a massive law enforcement effort – including, perhaps, National Guard and others – to go and literally pull people out of their homes and their workplaces, round them up, put them – I don't know – in buses, boxcars, in order to take them across our border. I just find that – not only absurd, but appalling. And that's why I support comprehensive immigration reform – I have for years. I supported it when I was in the Senate; I support it very strongly now. And it was a deep disappointment to me that when there was a bipartisan agreement voted on by the Senate to do just what we needed – a comprehensive immigration reform that included a – an earned path to citizenship – that the House would not even give it a vote.

So I will – I will oppose, in every way I can, what I consider to be nothing but a political stunt; and will also raise questions, as I'm doing today, about what the realities of that kind of claim actually are.

A second unidentified reporter caught this reference to the Holocaust and asked, "Madam Secretary, putting people in boxcars?" However, the Democratic front-runner ignored this question, and moved on.

TOM LLAMAS: Now to the race for 2016: Hillary Clinton facing a new firestorm tonight over her husband's e-mails – showing Bill Clinton asked for the green light to give speeches with ties to some of the most brutal regimes in the world for big bucks, all while his wife was secretary of state.

JONATHAN KARL (voice-over): With its vast army, nuclear weapons, and the world's most notorious dictator, North Korea would seem an unlikely place for a former president to make a buck. But e-mails obtained by ABC News show Bill Clinton tried to get approval to give a North Korea speech while Hillary was secretary of state. The request coming from one of his top aides to Mrs. Clinton's chief of staff, Cheryl Mills. Mills's terse reply: 'Decline it.' But the former president's aide asked for an explanation. Mills wrote back to tell Bill Clinton, 'If he needs more, let him know his wife knows, and I am happy to call him.'

The e-mails came to light because of a lawsuit by the conservative group Citizens United. Today, Mrs. Clinton acknowledged her husband asked for approval to give this speech and many others.

HILLARY CLINTON (from press conference): There was some unusual requests, but they all went through the process to try to make sure that the State Department conducted its independent review. 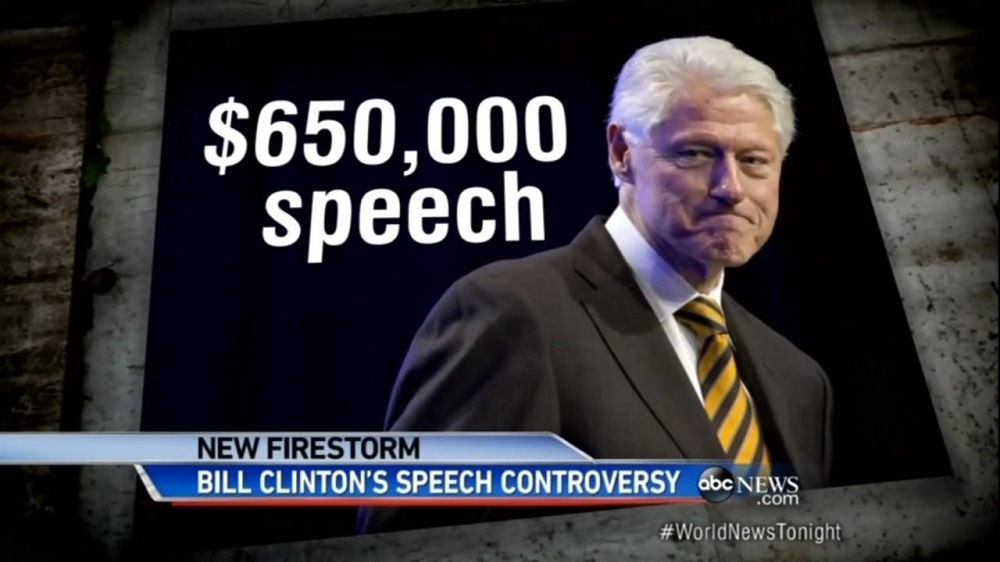 KARL: Another unusual request: a speech for $650,000 in the Congo, attended by two of Africa's most notorious dictators. Clinton's own speaking agency recommended declining the invite, noting – quote, 'The prevalence and intensity of sexual violence against women in eastern Congo is widely described as the worst in the world.' But Mr. Clinton did not want to take no for an answer – his aide asking if he could do the speech if all the money went to the Clinton Foundation, instead of to Clinton directly.

KARL (on-camera): Neither of those speeches happened – because, ultimately, the State Department didn't approve either of them. But all told, Bill Clinton made over $48 million giving speeches while Hillary was secretary of state. Tom?

LESTER HOLT: Now to the race for president: Hillary Clinton and her fellow Democratic rivals playing to a friendly room at the DNC summer meeting in Minneapolis – even as questions swirl about the ambitions of one potential candidate not on the stage: Vice President Joe Biden.

We get the details tonight from NBC's Kristen Welker.

KRISTEN WELKER (voice-over): It was an energized Hillary Clinton in Minneapolis today – reassuring Democrats that despite the e-mail controversy, she's still the party's best bet.

HILLARY CLINTON: That's what's at stake in this election: whether our country keeps moving toward opportunity, or whether Republicans get another chance to rip away the progress.

WELKER: But it was an angry former Maryland governor, Martin O'Malley, who accused the party's leadership of fixing the game.

O'MALLEY: Four debates and four debates only, we are told – not asked. This sort of rigged process has never been attempted before.

SEN. BERNIE SANDERS, (D), VERMONT: We need a movement which takes on the economic and political establishment – not one which is part of that establishment. (audience cheers and applauds)

WELKER: But after ticking off the points of his liberal agenda, his reception was much warmer.

For Clinton's part, she skipped over her party's rivals and launched some of her sharpest attacks yet at the Republican front-runner.

CLINTON: Trump actually says he would do a much better job for women than I would. Now, that's a general election debate that's going to be a lot of fun.

WELKER (on-camera): Overshadowing it all: the potential candidate who's not here – Vice President Joe Biden, who's still weighing his options. There wasn't a whole lot of talk about Biden here today, but Democrats are anxiously awaiting his decision. Kristen Welker, NBC News, Minneapolis.