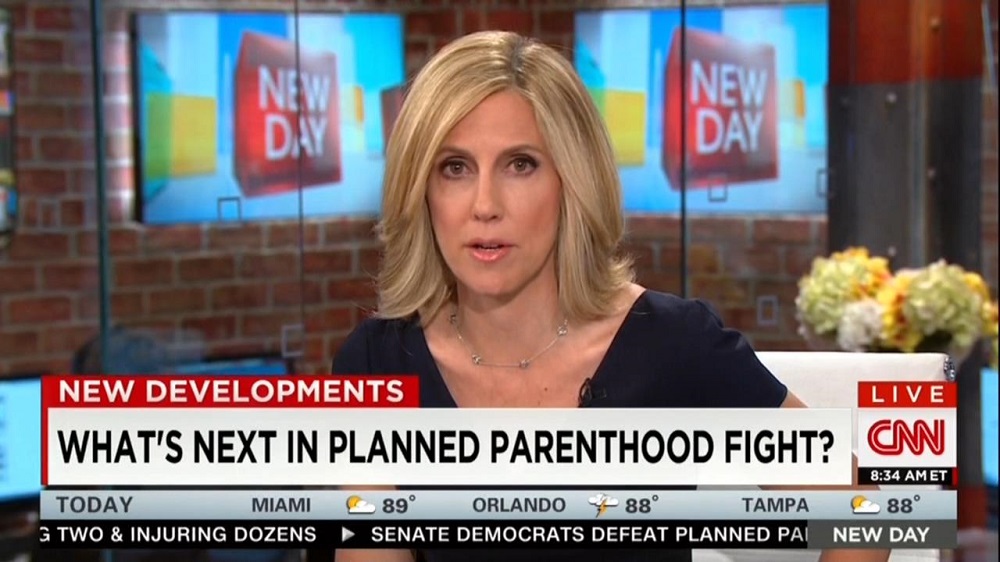 On Tuesday's New Day, CNN's Alisyn Camerota forwarded pro-abortion groups's smear of the Center for Medical Progress, which has been releasing the undercover videos of Planned Parenthood officials admitting that they vary its abortion techniques in order to preserved the organs of unborn babies for medial research. During an interview of David Daleiden, Camerota touted that "critics of your organization...say that you're not journalists, as you purport to be on your website, but rather, you're violent extremists." [video below]

The anchor continued that these "critics" also claim that "you are operating under the guise of investigative reporting, but really, you're trying to shut down all Planned Parenthoods, and women's access to things like birth control and other services that they provide."

Camerota made this over-the-top statement midway through her interview of Daleiden, who oversaw the undercover operation targeting Planned Parenthood's collusion with medical supply firms over the fetal organs. She then asked her guest, "Do you have any ties to Operation Rescue?" Daleiden responded by directly addressing the "violent" charge: "First, number one, I'm not a violent person and I never have been and I never will be." He added that "Troy Newman is one of the board members of the Center for Medical Progress, and Troy is a good friend of mine."

As far as the – as far as the second point, ultimately, the two and a half yearlong investigative journalism study that the Center for Medical Progress conducted about Planned Parenthood's sale of fetal tissue – ultimately, that's about exposing to the public the reality of how Planned Parenthood conducts their fetal tissue sales and what their relationship with companies like StemExpress is like. It's not an issue of the rest of Planned Parenthood's services or whether or not those are a good thing. It's – it's specifically about showing the public exactly how those sales work, and documenting those in a way that everybody can see.

DALEIDEN: ...[W]hat the vote in the Senate did show yesterday is that there's certainly already a bipartisan majority that is ready to have an immediate moratorium on Planned Parenthood's taxpayer funding directly as a result of the exposure of Planned Parenthood's illegal use of partial birth abortions to harvest higher-quality fetal organs for resale. What's going to-

ALISYN CAMEROTA: I mean, that's what you say that...the videos show. Obviously, Planned Parenthood refutes that, and says that it shows nothing of the sort – that, in fact, it shows them trying to recoup their costs for the transfer of fetal tissue to biotech companies, and that that's totally legal.

DALEIDEN: Right. Well, there's two things there: number one, Planned Parenthood still has not – after about three and a half weeks, Planned Parenthood still has not addressed the claim about partial birth abortions – which is a really clear description given by their senior director of medical services from the very first video that we produced. On the second point, Planned Parenthood also hasn't produced any evidence that they have any real costs associated with the supply of aborted fetal tissue – especially when they're partnered with a middle-man biotech company like StemExpress or Novagenics or ABR – that sends technicians into the clinics to do the harvesting –  to identify – identify the patients; to receive the fetuses...dissect the specimens – ship them off. That's all – all those costs are absorbed by other outside biotech companies. Yet, Planned Parenthood is still receiving payments per specimen that they produce.

CAMEROTA: David, I want to stop you there, because we did ask Planned Parenthood about that – about your claims – and we also asked StemExpress – and both of them say that you're wrong. They say that there are – the only costs that Planned Parenthood gets are the costs for transfer – if it involves storage; if it involves the time that it takes for a staff member to get consent from a patient.

In fact, let me read to you the statement that StemExpress gave us about this very thing: 'StemExpress does not pay Planned Parenthood clinics or any other health care provider for fetal tissue. StemExpress reimburses Planned Parenthood clinics and other health care providers for their reasonable costs associated with the tissue procurement process – such as those incurred in connection with storage, processing, documentation and staff participation.'

So now here are two different organization – Planned Parenthood and the middleman that you're talking about saying – that they're not being paid for the sale of fetal tissue.

Near the end of the segment, Camerota noted that "you plan to put out another – one of your undercover videos. There have been two restraining orders against your videos – one from a superior court, one from a judge just this week – because they believe that you may have done something illegal in obtaining these videos. Can you tell us what this video – the next video that you're going to put out contains?"

Daleiden answered, in part, that it would show "evidence...of how Planned Parenthood is actually willing to sell fully-intact fetuses to buyers of aborted fetal tissue. And whenever you're talking about fully-intact fetuses, in the context of fetal tissue procurement, those are situations where...no chemical like that can be used to kill the fetus beforehand, because that poisons the organs and the tissues....And so, in that case, it's prima fascia evidence of born-alive infant cases."