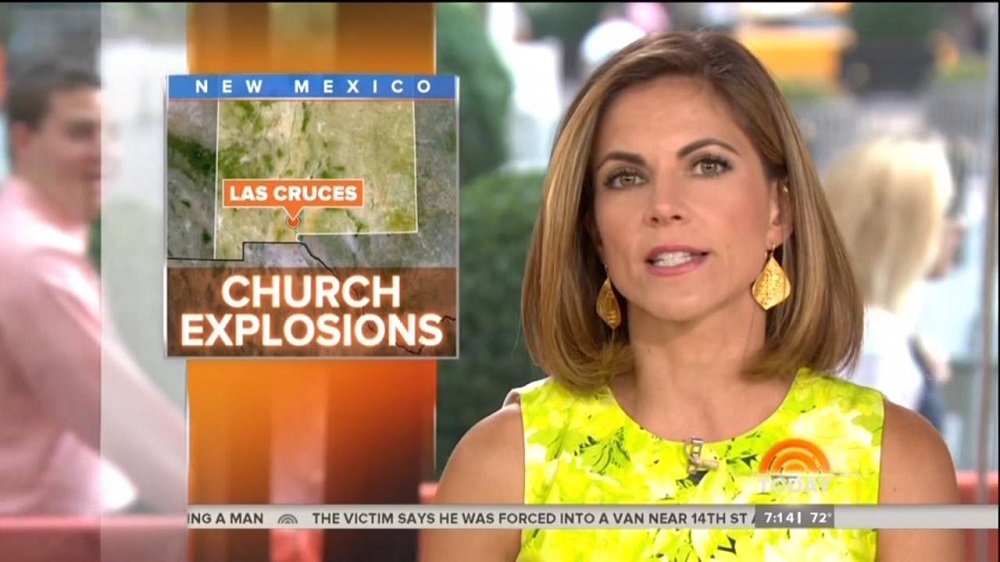 Monday's CBS This Morning and NBC's Today both devoted a minimal amount of coverage to the Sunday bombings of two churches in Las Cruces, New Mexico. The two Big Three morning newscasts devoted 58 seconds to news briefs on the explosions at a Baptist church and a Catholic parish. By contrast, the programs set aide 12 minutes and 22 seconds of air time to segments related to the outcry over the slaying of Cecil the Lion in Zimbabwe. [video below]

By contrast, ABC's Good Morning America stood out for airing a two minute, five second full report on the church bombings. Correspondent Tom Llamas spotlighted how "police say the explosive devices were intended to harm people. And now, the governor of New Mexico calling whoever set off the bombs a coward – vowing to come after them."

NORAH O'DONNELL: New Mexico's governor says a coward set off bombs Sunday morning outside two churches. The explosions in Las Cruces happened within 30 minutes of each other at a Baptist church and a Roman Catholic parish less than four miles apart. One bomb went off in a mailbox and the other in a trash can. They caused minor damage and no injuries. Police are looking for suspects. They are not sure if the attacks are connected.

On NBC's Today, news anchor Natalies Morales didn't include Governor Susana Martinez's "coward" insult of the bomber during her 26-second news brief, but pointed out investigators' labeling of the crimes:

NATALIE MORALES: Investigators in New Mexico say explosions at two churches Sunday morning were deliberate and meant to harm. A mailbox at a Baptist church in Las Cruses exploded just after 8 am on Sunday; and then, 20 minutes later, another explosion went off in a trash can about three miles away near a Catholic church. No one was injured, fortunately. Authorities say they're now following several leads, but they cannot link the attacks to any one group at this time.

CARSON DALY: And an investigation is under way to find whoever planted explosives outside two churches in Las Cruces, New Mexico. The blasts just 20 minutes apart Sunday morning caused minor damage to the buildings, but no injuries were reported.

One wonders how much air time the Big Three networks would set aside if the two bombings took place outside of mosques in New Mexico.

AMY ROBACH : From the race to the White House to the race to find out who is behind those mysterious bombings at two New Mexico churches – the back-to-back blasts rocking the nearby churches during Sunday services – the FBI now investigating. And ABC's Tom Llamas is here with more on that story. Good morning, Tom.

TOM LLAMAS: Amy, good morning. Police say the explosive devices were intended to harm people. And now, the governor of New Mexico calling whoever set off the bombs a coward – vowing to come after them.

UNIDENTIFIED MAN (from police radio dispatch): Can you contact the (unintelligible) bomb squad?

LLAMAS (voice-over): This morning, the FBI and other federal agencies trying to track down who bombed two churches on Sunday in New Mexico. One bomb going off in the middle of a Catholic Mass during communion.

GOV. SUSANA MARTINEZ, (R), NEW MEXICO (from press conference): Only a coward would place an explosive device in a place of peace and a place of worship.

LLAMAS: The first bomb going off at 8:20 am inside a mailbox near the entrance to the Calvary Baptist Church in Las Cruces. Eyewitnesses say the explosion shook the building.

DENNIS LLEWELLYN, EYEWITNESS: The impact was so strong, it not only shook the ground and the church, like you see – the immediate impression of an earthquake.

LLAMAS: Then, less than four miles away, around 20 minutes later at 8:40 am, another blast – this time at Holy Cross Catholic Church.

MONSIGNOR JOHN ANDERSON, HOLY CROSS ROMAN CATHOLIC CHURCH: This large bang went off, and I could see the papers floating down. And so, I didn't know what was going on.

LLAMAS: Monsignor John Anderson, about to start passing out Communion, not sure what to do.

UNIDENTIFIED WOMAN: And all of a sudden, I hear, hey, get everyone out of the church!

LLAMAS: Police evacuating both churches, bomb-sniffing dogs brought in – luckily no one injured. Investigators are not sure what type of explosives were used, but assume that the two bombings are related. But the bigger mystery: why?

LLAMAS: And right now, police are advising people to be on the lookout for anything suspicious at any other churches in that area, but to make sure they personally don't inspect anything – to call 911 if they see any type of device. Guys, this was so scary on a Sunday; and in one case, in the middle of Mass.