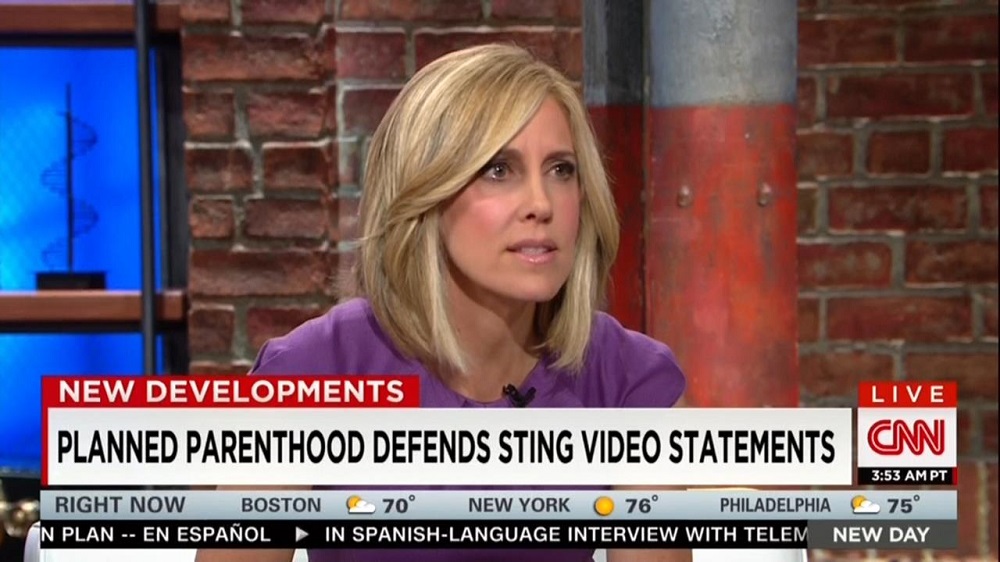 On Tuesday's New Day, CNN's Alisyn Camerota made no mention of the outrage over Planned Parenthood varying its abortion techniques in order to preserve unborn babies' organs for medical research, as was revealed in two undercover videos. Instead, Camerota zeroed in on "these representatives from Planned Parenthood negotiating" over prices for these organs. She even touted how the "exchange of fetal tissue...obviously, does a lot of good. There's a lot of research – cures for diseases that come from it." [video below]

Camerota later asked Planned Parenthood executive vice president Dawn Laguens, "Why not set a set price? Wouldn't that solve the problem? Because, in this video, it says – well, sometimes, it's between $30 to $100 – depending upon storage, and depending upon handling. And so, it makes it seem as though there's room for haggling or negotiation. Why not say, it's going to be $100 across the board, and there's no if's, and's, or buts?"

The anchor brought on Lageuns to respond to the controversy surrounding the undercover videos, which were released by the Center for Medical Progress. The segment aired just as the pro-life organization was releasing a third video, which featured a whistle-blower's account of "picking" through the remains of aborted babies in order to find usable organs. Camerota first noted that Planned Parenthood "disputes(s) the premise, obviously, that Planned Parenthood is selling, for a profit, fetal tissue. But it does sound like, in some of these excerpts, that they're negotiating." She asked, "Why are these representatives from Planned Parenthood negotiating?"

The executive didn't answer the question, but instead, regurgitated a talking point defending her organization's work. The CNN journalist interrupted her and rephrased her question. As you might expect, Laguens responded by launching an attack on the Center for Medical Progress:

DAWN LAGUENS, EXECUTIVE V.P., PLANNED PARENTHOOD: Alisyn, I think a little context setting is important to start here at 7 am: Planned Parenthood, for 99 years, has been the nation's leading reproductive health care organization. We provide care – birth control, STD testing, cancer screenings, abortion – to 2.5 million men and women a year in this country. A million young people get sex education from us. People know us well and know that, in fact, that is not Planned Parenthood-

CAMEROTA: Sure – and no one disputes those other services. It's just this particular service where there is an exchange of fetal tissue – which, by the way, obviously, does a lot of good. There's a lot of research – cures for diseases that come from it. But it does sound as though there's a price negotiation happening. What's the explanation for that?

LAGUENS: Here's what's happening – is an anti-abortion extremist group has, for three years, misrepresented who they are, and stalked our doctors and clinics. And they are meeting there –  and if you really listen to the longer tape – not the very short, edited – you know, shock value video that they have historically put out, and have put out in this case – what they do is they haggle. This is a doctor who – one, doesn't do this work at a place in our organization that doesn't have this program – and they are saying to her, no, that's not enough – let us pay you more. And she's clearly saying, I'm not sure where the reimbursement costs would be for doing this fetal tissue donation. They're trying to encourage her to start a program. So, the idea that she's haggling is completely off base.

Camerota followed up with her "why not set a price" question. The guest minimized the program in question, and emphasized that "there are shipping costs; there can be handling costs. We can be talking about different kinds of research. So, the costs can, in fact, vary. And that wouldn't be something that a doctor – would be the person to decide. That would be somebody in accounting, or someone who's in management. So, these were not the people who would even know these things."

CAMEROTA: Let's talk about that – because some in Congress are trying to defund Planned Parenthood. What they say is, yes, you do provide all those other services that you have just outlined – but that the money goes into one pot; and that they don't believe that there's a bright line between fundings (sic) for abortion, and funding for mammograms and birth control. What's the answer to that?

LAGUENS: Well, the answer is that there are very strict rules that govern abortion providers – including the very unfair Hyde Amendment, which absolutely prohibits federal funding from going to abortion. So-

CAMEROTA: And why is that unfair?

So, this is absolutely – when they talk about defunding, Americans need to know: what we're talking about is cutting women off of cancer screenings, breast exams, birth control – all STD testing and treatment. Abortion doesn't come into play at all with federal funding.

CAMEROTA: How do you make sure that no federal funds ever go towards abortion? What's the process?

LAGUENS: There are strict accounting rules in process, and all health care providers would follow that rule – not just Planned Parenthood.

To her credit, the CNN journalist ended the interview by pressing Laguens about promoting adoption instead of abortion:

CAMEROTA: One of the things that has come out: the critics of Planned Parenthood, during all of this – they say that despite – put aside the video – that it's time to take a second look at Planned Parenthood and to reconsider it – because they believe that Planned Parenthood doesn't actually offer women, who go in and say they have an unwanted pregnancy, options; that they, sort of, push women towards abortion – and that they don't present, for instance, lots of literature or answers on adoption. Is it time to provide more adoption options?

And unlike the people who stand outside of our clinics and shame and harass doctors and women –  and unlike the people who spend three years stalking doctors – trying to create problems where there aren't any – we are proud of what we do. We are on the side of women, and if you ever come to a Planned Parenthood – which I invite you to do – we would happily show you exactly how that happens.

CAMEROTA: Are you comfortable steering more women towards adoption?

LAGUENS: We don't steer women. I think that's the key thing. We trust women to make decisions. We want them to have all of the information. I personally know women who have gone to Planned Parenthood – and after talking to a counselor or a doctor or one of our staff members – actually made a different decision; or have even stepped away and said, I need more time to think about this. That's what Planned Parenthood is. That's why people trust us.

We're going to release a poll later this morning at 11:30, where it's going to show that the American people trust Planned Parenthood two-to-one over these video fraudsters who have been attacking our services – and safe, legal, abortion in this country, which is their goal.