In this latest installment of Entertainment’s Winners & Losers, a network TV show actually acknowledging a Christian audience, the cancellation of a Star Wars spinoff, and one of the most recognized names in children’s television continuing its sharp turn to the left.

There’s no doubt that most of CBS’s primetime programming is as left-wing as its two rivals. Case in point was Big Bang Theory creator Chuck Lorre invoking God and encouraging viewers to vote for Democrats in a vanity card that aired after an episode of the popular sitcom.

But it’s refreshing to see a prime time show on the Tiffany network like God Friended Me not go out of its way to alienate a majority of its audience. Earlier this September, the show debuted, and featured this very touching commentary on finding God in our lives:

Miles: People say that God has a plan for all of us. That were all part of a grand design. Well I never believed that to be true, but then He friended me, and it kind of turned my life upside down. Not that I think that it’s God, but in these crazy times we live in, we owe it to ourselves to ask the tough questions, and to open our minds to a new way of seeing the world. A place we can find our voice again.

This was nice, and it showed how there are some writers in Hollywood that can deviate from their employers’ liberal dogma every once in a while. The people behind God Friended Me are clear cultural winners.

Then came the Ron Howard-directed spinoff film Solo focusing on the namesake character Hans Solo. The actor who played Lando Calrissian in the film, Donald Glover, revealed that the character would be “pansexual,” so there was that in the political overtones department. The film ended up being a box office flop due to a variety of factors.

And now, as a result of Solo doing so poorly, all other spinoffs – including an origin story focused on the character Boba Fett – have been cancelled. Here’s Breitbart’s John Nolte on that:

A movie focused on Han Solo seemed to come at exactly the right time. After all, who doesn’t love Han Solo? Who doesn’t want to see Solo?  But then…

He went on to conclude his thoughts on the trouble Star Wars has found itself in:

In the arena of the big screen, where Star Wars truly belongs, Star Wars has one last gasp before it stares into the abyss, before it can no longer ride on the goodwill of the original trilogy and those beloved characters, who are all dead now.

How embarrassing is it to think that any part of a Star Wars universe would be in jeopardy? That’s what you get for letting political correctness get in the way of good storytelling. The president of Lucasfilm – Kathleen Kennedy – is a cultural loser.

Speaking of Disney, a corporate shakeup is about to take place at the ever-growing media company. Disney-ABC Television Group president Ben Sherwood is resigning after their acquisition deal with 21st Century Fox is complete, essentially fulfilling a suggestion this space made when the deal was first announced.

Part of the reason why this shakeup is taking place is because not only is Sky being sold to Comcast, but under Sherwood’s tenure, Disney’s television division became identified with far-left lunacy. It doesn’t help when people are watching more movies and television on direct-to-consumer streaming services rather than movie theaters and linear TV channels.

It’s unlikely the shakeup will do anything significant, but at least it will possibly tone down the open progressivism the television division has taken lately. Disney should be given props for actually taking steps to gain an audience again. And for that, they’re cultural winners.

For those who have previous read this column, Nickelodeon has been repeatedly chastised for campaigns pushing a progressive agenda.

First there was this past year’s low-rated Kids’ Choice Awards promoting gun control and then there was a promo that aired this summer telling people to “Celebrate [LGBT] Pride Month.” But the partnership went beyond that as last month, the cable channel tweeted this picture seen below in cooperation with the radical LGBT group GLAAD: 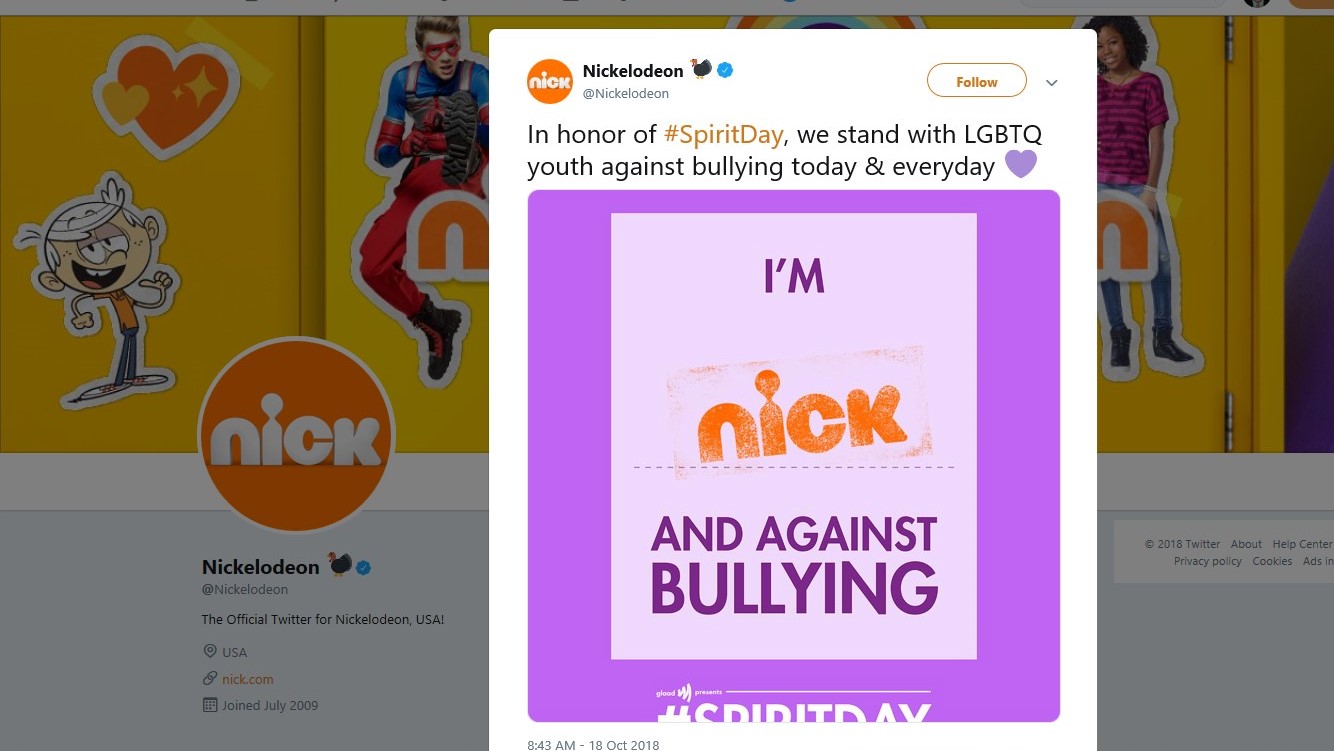 The text seen in correspondence with the tweet went: “In honor of #SpiritDay, we stand with LGBTQ youth against bullying today and everyday.”

Anti-bullying campaigns couldn’t be any more important. But, where the problem lies is teaming up with a group that wants to silence those who don’t agree with its far-left worldview. Not only does that campaign lose credibility, it doesn’t even help Nick’s ratings, which were down over 20 percent this year.

Editor's Note: The following has been adapted with the author's permission from its original publication on Carolina Culture Warrior. To be fully transparent, the author also owns shares in ABC (as previously disclosed) and supported the merger discussed above.